Czech inflation in April up to its highest level since 1993 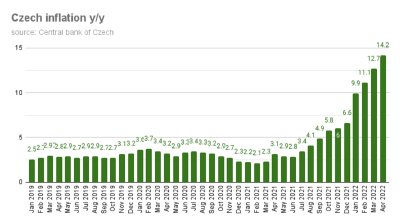 Czech consumer prices in April have seen the highest annual growth since December 1993, the Czech Statistics Office (CSO) reported in its monthly report. In yearly terms, inflation accelerated to 14.2% in April, up from 12.7% in March, driven mainly by price increases in housing, fuel and food.

The analysts had expected slower growth slightly above 13%. Consumer prices in April increased by 1.8%, month-on-month.

"Consumer prices increased by 14.2% in comparison with last April. This was the most in last three decades, when in December 1993 the y/y price growth reached 18.2%. The April annual index was mostly affected by prices of housing, fuels and food,” noted Pavla Sediva, head of Consumer Price Statistics Unit of the CSO.

"Inflation is likely to continue to rise in the coming months due to continued increases in energy and food prices. At the moment, we see it peaking further in June, above 15%," said Jan Bures, chief economist at Patria Finance, to the Czech News Agency.

According to Bures, it is likely that the current central bank board will reach for a 0.75 percentage point rate hike at its next meeting before some of the members are re-elected at the end of June.

"Given that inflation has not yet peaked and housing costs continue to rise, inflation could exceed the 15 % mark in the coming months. It is rising faster than the central bank's forecast [CNB] , so we can expect the CNB to raise interest rates significantly at its June meeting by another 0.75 percentage point," said Petr Dufek, Creditas' chief economist, as quoted by the news agency.

According to Pavel Stepanek, a former CNB board member and chief economist at Fondee, the CNB has so far acted correctly in its efforts to fight inflation, but it is not done yet. "It shows how wrong are the statements that [CNB] should have been less strict in raising rates or that it should have tolerated price growth higher than its inflation target," he said.

Filip Louzensky, an analyst at Porto, pointed out that inflation in the Czech Republic is one of the highest in the world, ranking 25th out of 193 countries. Trinity Bank's chief economist Lukas Kovanda noted average inflation of around 14% should be expected for the whole 2022. At the same time, he said, the CNB will be forced to raise its base interest rate to 7%.

Kral expects inflation to drop below 10% in early 2023 as a result of an unwinding of the current exceptional price pressures, the CNB’s interest rate hikes to date and an expected exchange rate appreciation close to CZK24 to the euro.

"At the same time, the CNB’s forceful monetary policy is helping to anchor the inflation expectations of firms and households. As a result, inflation will decrease swiftly next year and fall close to the 2% target in the second half of 2023," he added.