Czech industry up by 1.5% y/y in February 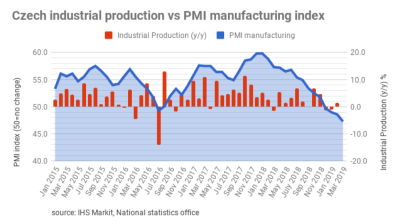 Czechia's industrial production increased by 1.5% year-on-year in February, but the PMI manufacturing index is falling at the fastest rate since 2012
By nto in Prague April 9, 2019

Czech industrial production increased at constant prices by 1.5% year-on-year in February, and improvement from the  -1.1% contraction in January driven mainly by a slump in car production, according to the data by the Czech Statistics Office published on April 8. Seasonally adjusted industrial production grew by 0.5% month-on-month.

“These figures surprised somewhat favourably, especially in the context of weaker leading indicators and data from abroad. However, the relatively strong figure is partly due to the lower comparative base in electricity production last year that was caused by a shutdown at the Temelin nuclear power plant,” said ING Chief Economist Jakub Seidler.

In a worrying parallel development, Czechia’s PMI manufacturing index has been falling steadily since the autumn of 2017 and is now in negative territory, falling at its fastest rate since December 2012.

“The automotive sector has grown by 2% in 2018 - following double-digit annual growth since 2014, and so the weakest dynamics since 2013. Recent data suggest the car sector will at best stagnate this year,” Seidler said.

“Although today's numbers from domestic industrial production have not disappointed, data from abroad, mainly Germany, have not added much optimism yet. … Though there are some signs of stabilization, we believe that Czech industry will slow close to 2% y/y this year, after 3.3% growth in 2018. Further downward revisions are not ruled out, particularly if forthcoming global data does not start to improve,” Seidler added.