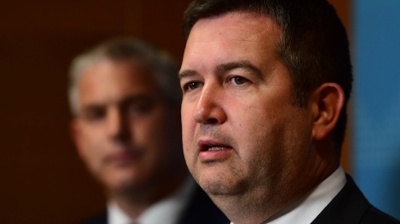 Jan Hamacek won re-election as leader at the weekend party conference, but faces a tough battle to keep the country's oldest party in parliament at this autumn's election.
By bne IntelliNews April 13, 2021

Czech Foreign Minister Tomas Petricek (Social Democrats) has been recalled from his post by the interior minister and Social Democrat chair Jan Hamacek after his failed bid for the chairmanship of the Social Democrats at its national congress at the weekend.

According to Hamacek, Petricek has been dismissed from his post because the party needs to be more “understandable” to voters in the general elections this autumn. Hamacek said Petricek presented a completely different concept and attitude to the government during the party congress, far from the Social Democrats' focus on building its voter base within the ranks of more conservative left-wing voters, a strategy represented by Hamacek, who was re-elected chair.

Hamacek refused claims that Petricek has been recalled due to pressure from the Prime Minister Andrej Babis or pro-Russian President Milos Zeman, who said in March that Petricek should be removed due to his stance on the expansion of the Dukovany nuclear power plant.

Petricek has called for the party to reject future co-operation with the populist billionaire premier's Ano party and to try to reach out to younger, more liberal voters. He had also pushed for Russia to be excluded from the Dukovany tender, and for the Sputnik V vaccine against COVID-19 to be shunned (at least until it gets EU-wide approval), both partly on foreign policy grounds.

“It is no secret that I have been a thorn in the side of the Castle and President Zeman. Most recently in the matter of the future of the Dukovany power plant, where I believe security comes first, or in that of vaccination, where I also believe that the security of our citizens comes first. I expect that in the near future we would also have had disagreements about the Ukraine, or other foreign policy themes,” said Petricek, as quoted by Prague International Radio.

According to the opposition party ODS (Civic Democrats) chair Petr Fiala, the Social Democrats no longer have their own policy, the party only fulfills the wishes of the president and prime minister.

“As far as the government is concerned, the Social Democrats have presented a united front. At our recent conference, two separate visions for our party were presented to the membership. One which is critical of our party being in government, the other which is less so” Hamacek noted.

Hamacek offered Petricek´s post to current Culture Minister and former Foreign Minister Lubos Zaoralek who, however, is not too keen to leave his current seat.

“He already has experience as foreign minister and has shown through his past activity that nothing will fundamentally change in the direction of Czech foreign policy under his leadership,” Hamacek explained.

Zaoralek led the Social Democrats as its interim chairman in the last elections into the Chamber of Deputies four years ago when the party suffered the worst results in its history, losing 15 seats in the chamber.

The Social Democrats did poorly also in regional and Senate elections held last year. Some opinion polls have suggested they may not reach the 5% threshold necessary to make it back to the Chamber of Deputies. According to the latest poll by Data Collect for the Czech Television, the Social Democrats would gain 3.7%.

The winner of the elections in March would be the coalition of Pirates and STAN with 28.5%, followed by the senior government party ANO with 22%, the coalition SPOLU (ODS, Christian Democrats and TOP09), far-right party SPD with 13.4% and the coalition of three small parties (Eurosceptic Trikolora, the Free Citizens' Party and the Freeholder Party) with 5.1%.

"We informed the chair Hamacek that in the current situation we will no longer negotiate pre-election cooperation," said the Greens' co-chairman Michal Berg.

"The Congress of Social Democracy and the next steps following it do not give us hope that it would be possible to meet the basic requirement of cooperation set by our Congress. That is that such a project would contribute to a fundamental change in political culture in the Czech Republic and to the end of the oligarchic unification of political and economic power and authoritarian style of governing,” said the co-chair of the Green Party Magdalena Davis.