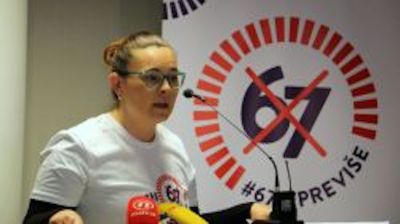 National "67 is too much" coordinator Mirela Bojić at a press conference to launch the initiative on March 18.
By bne IntelliNews March 18, 2019

As the Croatian government prepares to gradually raise the retirement age to 67 by 2033, trade unions are pushing for a referendum to be held on the controversial increase.

Three Croatian labor union federations have announced they are planning to draw up a petition for a referendum to prevent the extension of the retirement age to 67. They launched a campaign "67 is too much” at a joint press conference on March 18.

The Croatian parliament passed on December 7 a set of six bills as part of its pension reform, despite a mass protest being organised in the country. The pension reforms envisages that the pension age will be raised to 67 years as of 2033. Early retirement will be penalised with a 0.3% reduction in pensions for each month of early retirement or 18% for five years.

Trade unionists will collect signatures between April 27 and May 11, calling for a referendum on the issue should be organised.

“We all, the Croatian citizens, the public, you who testified to this on October 20 at the large protest on Europe Square gave a public and a clear commitment,” the leader of the Independent Trade Unions of Croatia, Kresimir Sever, said.

“As government stubbornly continued in the direction of directly opposing the interests of its own people, we continued in our own [direction].”

The initiative proposes that an insured person should be entitled to get their pension upon reaching 65 years and early old age pension at 60 years. Opponents say the penalisation for early retirement should be reduced to 0.2%, Total Croatia News reported.

Trade unionists claim Croatians live on average shorter lives than people elsewhere. “We are a sick, overworked and poor nation where people are forced to work to exhaustion, after which they can work four hours also when they retire," Sever said.

The opposition to the overhaul of the pension system echoes that in several other countries in Central, Southeast and Eastern Europe, as governments react to longer life expectancies and deteriorating demographics by raising retirement ages.

Neighbouring Slovenia already carried out difficult pension reforms in response to the global financial crisis. However, the country remains under pressure due to the ageing population. The International Monetary Fund (IMF) said in February that the Slovenian authorities should take advantage of the positive economic cycle to deepen fiscal and structural reforms. "They should focus on pensions, health, education, and the wage bill," the IMF said.

Further afield, last year the Russian government announced a controversial, long overdue, and widely unpopular pension reform that hikes the retirement ages for Russians from Soviet era lows. The original bill currently in the State Duma proposes hiking the retirement age for women to 63 and for men to 65 by 2034, from 55 and 60, respectively. The Ministry of Finance has said previously that he change is necessary as with Russia’s deteriorating demographics it is afraid of pension payments overwhelming the state finances in the coming years.

However, as the backlash against the planned reforms threatened President Vladimir Putin’s popularity ratings, the president — who had kept his distance from the changes — eventually stepped in to scale them back. In a televised address to the nation, Putin cut back the retirement age increase for women by eight years from the current 55 to 63, scaling it back to 60 years. He also introduced a number of other compensatory measures that were immediately picked up by the cabinet and the parliament.

Kazakhstan faced similar problems overhauling its pension system a few years earlier. In a rare instance of mass public mobilisation in the authoritarian Central Asian state, opponents to the reforms, which included plans to bring the retirement age for women into line with that for men, gathered thousands of signatures against the changes. The country’s youthful labour and social protection minister, Serik Abdenov, became a national figure of fun after failing to explain the reforms at a public meeting, telling attendees: "You have to work and work... because, esteemed fellow countrymen, because, because…” Abdenov was eventually sacked as President Nursultan Nazarbayev ordered the government to rethink the reforms.

In Armenia, Minister of Labor and Social Affairs Mane Tandilyan announced her resignation in June last year after a disagreement with Prime Minister Nikol Pashninian over reforms to the country’s pensions system. Tandilyan had lobbied unsuccessfully for the introduction of a mandatory funded pension system to be postponed for a year.