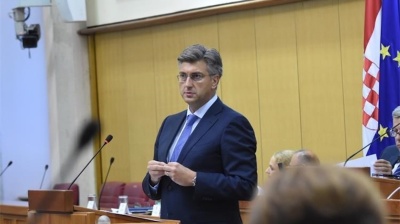 Croatian Prime Minister Andrej Plenkovic set out his government’s four priorities for the country’s presidency of the European Union in the second half of next year in a speech on September 18.

However, it is most likely that the UK’s impending exit from the 28 member bloc will continue to overshadow EU business well into the Croatian presidency.

Plenkovic stressed that “no one has a crystal ball” to say whether the UK will crash out without a deal on October 31, or if London will secure an extension until January 31.

“We must be prepared for both scenarios — one will place these [Brexit] negotiations on our lap as the presiding country, and the other — if this is over — we will be the ones to lead the discussions on creating a platform for future relations between the Union and the United Kingdom. These are two tasks [ahead of us].”

Given its geographic distance from the UK and Croatia’s late entry to the EU — it was the most recent member to join in 2013 — Croatia is expected to be among the least affected countries economically by the UK’s exit.

Nonetheless, Plenkovic voiced his strong opinions on the topic: “I have repeatedly made it clear that this was one of the worst possible decisions a union member could make after 46 years of membership, but unfortunately it happened,” he said.

Despite the ongoing political drama, the Croatian prime minister stressed that his government plans to focus on four specific areas during Croatia’s first ever EU Council presidency, that will start six and a half years after it joined the bloc on July 1, 2013.

As outlined by Plenkovic, these are:

Commenting on the preparations for the presidency, Plenkovic said: “I can say that the period behind us has been extremely intense, and the one that is still to come, in terms of Croatia's responsibility and intensity, is such that we could not yet perceive it in international terms and engagement, and it requires the full involvement and contribution of all of us together.”

A total of 161 events are planned during Croatia’s EU council presidency, including a summit of EU and Southeast European leaders.

Croatia has made considerable progress over the last five years, but the authorities need to prepare for a future global downturn as well as continue the catch-up with fellow EU member states, said ... more

The European Commission (EC) recommended that Croatia join Schengen after meeting the conditions to join the border-free area, the EC said in a statement on October 22.  Croatia is the EU’s ... more

More than 80% of Croatia’s primary and secondary school teachers went on strike on October 10 after talks on pay with government officials broke down.  Union leaders said 85% of secondary ... more