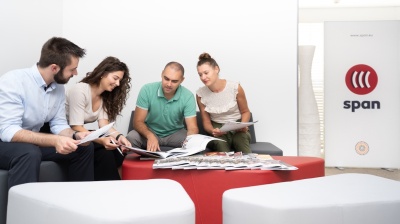 Croatian IT company Span raised close to HRK101.2mn (€13mn) through a public offering on the Zagreb Stock Exchange (ZSE).

Span, whose shares will start trading on the ZSE on September 23, is the first local IT company to IPO on the exchange in the last 18 years. According to founder and CEO Nikola Dujmovic, by going public, the company wants to “ensure organic growth in existing markets, but also enable additional  international  expansion”.

ZSE and Span have signed a contract on the listing of Span's shares on the Official Market of the Zagreb Stock Exchange, they announced on September 21. According to a statement published on the stock exchange's website, the contract was signed by Nikola Dujmovic, president of the management board and CEO of Span, and Ivana Gazic, president of the management board of the Zagreb Stock Exchange.

“We are extremely pleased with how Span realised its IPO, the whole process was done very professionally. The interest was really high, which clearly shows how the company is perceived by investors, which was certainly influenced by the fact that the IT sector is one of the most globally attractive for investment.”, said Gazic.

“Demand for shares significantly exceeded supply, all shares were sold at the maximum price in the offered range in the amount of HRK175 and a total of HRK101.2mn was raised. With more than a thousand new Span shareholders, including institutional investors, a lot of small investors and our employees, we have achieved a balanced structure with which Span enters a new development phase of the business,” said Dujmovic.

Span employees were invited to buy shares through a special programme and thus acquire a stake in the company.

Span has more than 500 IT solution architects, consultants, support specialists, business analysts, and researchers, according to its website. Its international expansion focussed on Eastern Europe.  Aside from its head office in Osijek, Croatia it has offices in, Azerbaijan, Germany, Slovenia, the UK, Ukraine and the US.

In the last three years, the average annual revenue growth of Span and its subsidiaries in Croatia and abroad was over 20%, the company said when announcing its IPO. It generates 70% of its revenues on the international market and is one of Croatia’s largest exporters.

Russian e-commerce turnover up 1.5-fold in 1H22
14 hours ago
Home of the humbled lira, Turkey’s the biggest cryptocurrency market in the Middle East
18 hours ago
Business Insider: Western tech majors have tested or used controversial Russian face recognition technology
7 days ago
From 4G to 6G: How Russia seeks to develop mobile networks amid shortages of domestic frequency and foreign equipment
7 days ago
Should I stay or go for founder of Russian internet major Yandex
11 days ago