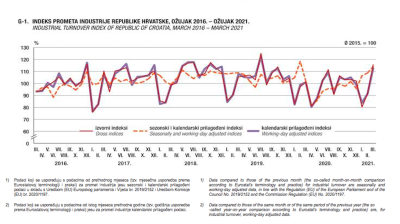 Croatia's industrial sales increased by 11.6% y/y in March, reversing a 7.7% year-on-year fall in the previous month, the statistics office announced in its preliminary working-day adjusted data published on May 27.

On the other hand, sales in the energy sector decreased by 5.3% y/y, after falling by 39% y/y in February, while sales in the sector of non-durable consumer goods moved down by 2.5% y/y, reversing a 0.7% y/y rise in the previous month.

In 2020, industrial turnover contracted 7% on the year.