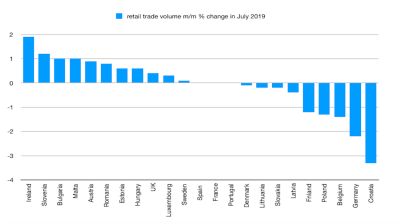 Croatia’s retail trade volume declined by 3.3% m/m in July, compared to an average m/m decrease of 0.5% across the 28 EU member states
By bne IntelliNews September 5, 2019

Croatia recorded the sharpest month-on-month decline in retail trade turnover across the EU in July compared to the previous month, a new report from Eurostat said.

Croatia’s retail trade volume declined by 3.3% m/m in July, compared to an average m/m decrease of 0.5% across the 28 EU member states during July, the month when retailers typically hold their summer sales.

The decrease in Croatia was considerably greater than the next-largest declines of 2.2% and 1.4% recorded in Germany and Belgium respectively.

Among the states that saw retail trade volume rise on the month, the most substantial increases were observed in Ireland (1.9%), Slovenia (1.2%), Bulgaria and Malta (both 1.0%).

Across the union, the retail trade volume decreased by 0.7% m/m for non-food products and by 0.3% for food, drinks and tobacco, while automotive fuels remained unchanged.

In annual terms, the highest yearly increases in the total retail trade volume were registered in Romania (+7.5%), Malta (+6.5%), Hungary and Slovenia (both +6.3%), while Slovakia was the only country to report a decrease (of 0.8%).

Czechia, Greece, Italy, Cyprus and the Netherlands did not provide data.