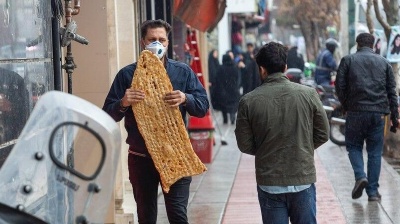 People in Qom fearing the worst have taken to wearing face masks.
By bne IntellIiNews February 20, 2020

Schools and universities in the Iranian holy city of Qom have been closed by officials following the deaths of two men from coronavirus which has sparked fears of an epidemic emerging in Iran. February 20 also saw Iraq close crossings at its border with the Islamic Republic, Iraq Airways suspend flights to and from Iran and Armenia and Azerbaijan intensify border checkpoint controls for anyone arriving from their big neighbour, populated by 83mn people, to the south.

Qom, the seat of Shi’ite Islamic learning in Iran and located just 140 kilometres (87 miles) to the south of Tehran, faces a perfect storm scenario on February 21 when the Iranian parliamentary elections will see great numbers of people mingling in line waiting to vote. The city is home to around 1.2mn people.

The two deaths startled many people in Iran as it was reported the two victims had not lately been outside of Qom province. Nor were they known to have come into contact with anyone who had been to China.

“Two people have tested positive for COVID-19 [the official name for coronavirus] in Qom and one person in Arak [125km from Qom], bringing the total of confirmed cases to five in Iran,” spokesman Kianush Jahanpur said earlier on February 19 in a tweet.

Qom has temporarily stopped holding seminary exams in its bid to prevent the further spread of the virus, Aftab News reported.

Many liberal-mindeed Iranians had already taken to social media to declare that they would most likely avoid voting in the elections given that the hardline establishment has excluded so many so-called “reformist” candidates from the ticket. Now the anxiety, panic and paranoia generated by events in Qom could leave many polling stations across Iran near-deserted on election day.

Earlier on February 20, a man said to be from Germany was removed from an underground train at Shush station in downtown Tehran after showing symptoms that could be associated with COVID-19, which has killed more than 2,100 people in China, Asr Iran reported.

The news service added that according to the public relations manager of Tehran Metro, Mohsen Mohammadian, the station and train were immediately sealed off and disinfected after the man was taken away to hospital.

A decontamination of the Tehran bus system is also expected to take place following the incident, Mohammad Tarafi, director of the Tehran Bus Company told ISNA.

Potential cases of coronavirus infection have been reported in other locations in Iran including in Babol, a city in the Caspian Sea-bordering province of Mazandaran.

In a video shared on Iranian social media (see at foot of story), a nurse in Babol is seen burning and wafting incense in a corridor, while jokingly saying it "is the only defence we have against the coronavirus outbreak".

In Armenia, the health ministry announced a beefing up of controls at the southern Meghri checkpoint on the border with Iran following the Qom deaths, Sputnik reported.

In terms of foreign arrivals in Armenia, Iranians make up the third biggest group, behind Russians and Georgians. In January-September last year alone, 132,388 Iranian arrivals in Armenia were recorded. The number of holidaymakers from Iran usually spikes in March, during the annual Nowruz (Persian New Year) holiday on March 21.

“There is no talk of an epidemic; therefore, for now, we should just monitor the development of the situation and take security measures,” a Tourism Federation of Armenia representative said on February 20. He added that a “special, trusting relationship has long been established between Yerevan and Tehran, and Iranian tourists are always welcome in our country”.

Director-General of Armenia Airways Arlen Davudyan-Zarnay gave assurances that flights from Yerevan to Tehran and back would not be cancelled.

“There was not even a conversation on this subject. All airlines received a decree from the Civil Aviation Committee to take security measures. And even then, the instruction came immediately after the news of the outbreak of coronavirus in China,” Davudyan-Zarnay noted.

He stressed that the infection would spread around the world; therefore, “you need to be vigilant when performing any flights.”

The Iranian Embassy in Yerevan said that Tehran was taking all measures to combat the coronavirus. Authorities, it said, were preparing special hospital availabilities to receive the infected.

Neighbouring Azerbaijan has stepped up screening procedures at the Astara checkpoint, the busiest border crossing on the Azerbaijani-Iranian border.

In Iraq, consternation over the potential for a serious coronavirus outbreak has focused on religious cities including Najaf and Karbala where thousands of Iranians visit on a weekly basis due to their Shi’ite shrines. It is quite typical for a person who has paid a visit to Qom to journey on to Iraq in order to complete an extensive tour of religious sites.

Iraq has not reported any coronavirus fatalities so far.