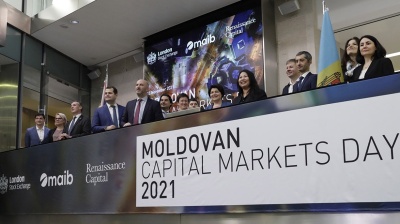 After years of political turmoil, corruption scandals and zig-zagging between Russia and the West, this summer Moldovans voted to give a solid parliamentary majority to the Party of Action and Solidarity (PAS), producing a stable government whose agenda is fully aligned with that of the president.

“We have a strong mandate. The government and president are aligned in steering Moldova in the direction of European integration and economic development based on good governance principles. This agenda is both ambitious and urgent,” Gavrilita told delegates at the event in London, organised by the LSE, in partnership with Renaissance Capital and MAIB.

While President Maia Sandu, who came to power in late 2020, has sought to reassure Moscow that the government isn’t anti-Russian, her actions and those of Gavrilita’s government have clearly been focussed on reforms with a view to deeper integration with the EU.

Among the government’s priorities, it has already embarked on justice reforms which, Gavrilita said, “go way beyond the justice system to be a society reform and economic reform”. She stressed that trust, stability and predictability are essential for attracting investment.

Another priority is digitalisation, which was already accelerated by the pandemic, and Gavrilita’s government includes Moldova’s first ever deputy prime minister for digitalisation. “We want to transform Moldova into a truly attractive country where digital solutions are the norm, not the exception,” Gavrilita said.

Other aims include improving Moldova’s international image and credit rating, supporting Moldovan companies that plan to list on international stock exchanges, and creating a basis for private equity and other funds to invest. Chisinau is also considering the possibility to issue government eurobonds to finance projects of national importance.

“We have been alongside our Moldovan partners friends in good but also less good times. Today, the outlook is more hopeful than it has been for many years. … All branches of government are now under the leadership of a party firmly supportive of reforms. There will be challenges ahead I am sure, but the Moldovan economy is recovering very robustly,” said Odile Renaud-Basso, president of the European Bank for Reconstruction and Development (EBRD), which forecasts GDP growth of 7% this year.

Sandu and the PAS came to power after several years marked by a power struggle between Socialist former president Igor Dodon and the (now fugitive) businessman and former Democratic Party leader Vlad Plahotnuic, as well as the massive frauds in the banking sector known as the ‘$1bn bank frauds’.

The cleanup of the banking sector got a head start on the reforms now being initiated by the government, as international financial institutions including the International Monetary Fund (IMF) and EBRD stepped in after the frauds were revealed.

Central bank governor Octavian Armasu pointed out that the post-independence banking sector in Moldova is now 30 years of age. “In this history there have been a lot of difficult moments, but also achievements,” he said. “Lately we have implemented a reform agenda starting especially from 2016 with the implementation of the IMF programme focussed on reforms of bank sector following the crisis of 2014.”

Today, banks in Moldova are well capitalised and well governed, Armasu said. The reforms have increased transparency and trust for customers, including depositors. The banking sector has proven resilient, especially during the recent pandemic crisis, and provided the necessary support to the economy. Currently 90% of the banking sector is in EU hands. Armasu also noted the low bank loan to GDP ratio, meaning there are opportunities to grow the sector.

This message was reinforced by the EBRD’s Renaud-Basso; the development bank which owns an equity stake in Moldova’s largest bank MAIB alongside two private equity funds. “The banking crisis set in motion a whole series of structural changes. There is now a new focus on transparency and corporate governance and an interest in attracting the right kind of investors,” she commented. Compared to its CIS peers, in Moldova banks are well capitalised and have low levels of non-performing loans (NPLs), according to the EBRD head, who added, “It’s no surprise that one of Moldova’s leading banks is looking to list on an international stock exchange.”

A London debut for MAIB?

The reforms within the sector stood MAIB in good stead, as the bank has come such a long way in recent years it’s now at a stage where it is mulling a debut on the LSE or another international exchange.

"It is of major importance for the future of the country and for the MAIB as a leader of the banking sector to highlight the attractiveness of the Moldovan economy and the country's banking sector,” said Giorgi Shagidze, CEO of MAIB, on November 15. “These include a low debt to GDP ratio, a very stable exchange rate and an active integration rate with the European Union, with up to 70% of Moldova's exports to the EU. A stable currency, a low level of public and private debt, a strong banking sector are the basis for sustainable growth.”

Shagidze also stressed the “active EU integration” already going on in the country, citing that up to 70% of exports go to the EU, up to 50% of imports are from the EU and 600,000 Moldovans have an EU passport.

If MAIB goes ahead with a London listing it will follow dozens of other companies from the emerging Europe region, among them Georgian bank TBC, formerly led by Shagidze. Julia Hoggett, CEO of the London Stock Exchange, pointed out that 120 companies worth over $140bn have listed equity on the LSE, in addition to neatly 500 sovereign bonds from the region with proceeds totalling over $200bn.

Textiles, IT and agriculture

But banks aren’t the only game in town. Delegates at the conference looked at some of the other areas where Moldova is strong or has potential.

Wine was naturally highlighted as a high-profile and successful sector. Wine production in Moldova goes back thousands of years, and despite its small size the country is currently the 11th largest wine producer in Europe.

Among the speakers was Vasile Tofan, chairman of the board of directors of Purcari Wineries, which became the first Moldovan company to IPO on the Bucharest Stock Exchange in 2018, and has been pushing international expansion. “Wine traditionally difficult to crack, but we discovered with the right strategy it can be very good business,” Tofan commented. “Moldova is a superpower in the wine world,” he added. Purcari recently reported strong results for the first nine months of 2021, including a record Ebitda margin of 38%.

More broadly there is potential in the agricultural sector, with delegates extolling the fertile land and good climate that helps production from wine to honey to walnuts to flourish.

Angela Sax, EBRD head of Moldova, pointed out to delegates she was wearing a dress and necklace made by local designers. She charted the development of the industry from simple cut-make-trim (CMT) operations to the current situation were high margin activities make up 25% of operations in the country. The industry employs 30,000 people, helped not only by its low wages, but also by its proximity and access to the markets of both the EU and the CIS.

Eoin Woods, CTO of Endava, described Moldova as an important part of the London-based IT company’s success story. Moldova was the location of the company’s first scale software engineering centres and is now one of the largest even though it’s one of the smallest countries it operates in.

The Baltic states may seem a far off model for Moldova to aspire to. The fellow former Soviet states made a decisive break from the past after the fall of communism and are now EU members and — Estonia in particular — some of the most prosperous states in the former socialist space.

However, Rodgers Brenner Chawani, IMF resident representative in Moldova said he believes “Moldova has the potential to be very similar to the success stories in the Baltics over the next 10-20 years if capital can be brought into the country and assuming integration with the EU continues.”

The potential is there, said Chawani, but the question has always been how to achieve that potential. Analysis by the IMF on what went wrong showed it was a mix of "priorities, policies and politics”, Chawani said. He believes the current situation is “very different” from the past.

“Moldova is at a point where it can break away from the tradition of stop and go policies. If the priorities are properly aligned with the ambitious governance and reform agenda, if we have commitment to reform, irreversibility and implementation … this time will it be different for Moldova.”