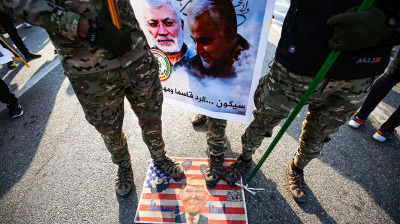 Caucasus states are looking on nervously after the US assassinated Iranian general Qassem Soleimani
By Fuad Shahbazov Independent Analyst in Baku January 7, 2020

On January 3, the US Armed Forces carried out a surprise drone attack in Baghdad airport, which eventually killed the iconic Iranian general and Commander-in-Chief of the elite Quds Forces Qasem Soleimani. Following the general’s assassination, tensions between Washington and Tehran reached the highest point in years. While the Iranian authorities promised “harsh revenge” for brutal assassination, US President Donald Trump vowed to destroy 52 cultural sites in Iran.

According to the Wall Street Journal (WSJ) President Trump’s decision to assassinate general Soleimani had been made under the intense pressure of his inner circle, including Secretary of State Mike Pompeo, whereas Pentagon officials were strictly against of this reckless action that has been considered and rejected by both presidents Obama and Bush as too risky.

The position of Pentagon over the Iranian crisis seems to be rational, as the increasing pressure on Tehran would require deployment of additional troops in the Middle East region, which is to go in the opposite direction of what Trump has long promised. Undoubtedly, the grave violation of Iraq’s national sovereignty was one of the more reckless decisions made by the Trump administration as it will likely worsen the already unstable situation in the country and trigger fresh turmoil in the already volatile region.

In the meantime, the public pressure on the Islamic Republic to respond with adequate retaliation is mounting. Officially Tehran has few options to retaliate. The regime is already under pressure at home following the recent unrests in Iran’s big cities over gasoline prices, long-term economic turbulence followed by sharp inflation, and recent anti-Iran protests in Iraq which revealed the limitations of Iran’s ideological course.

Nevertheless, Iran is still able to target the US military bases or personnel, diplomatic or humanitarian missions in the Middle East, and even launch missile attacks, including on the Saudi oil fields. The fact that the State Department urged all US citizens to immediately leave Iraq proves that the White House is preparing for such reprisals. On the other hand, the Islamic Republic could boost harsh anti-American rhetoric and exploit Soleimani’s assassination, as it has united all Iranians after the violent and bloody mass protests against the regime in November.

The economic costs of Soleimani’s assassination are also mounting. Oil prices immediately surged to $70 a barrel following the drone strike, equities around the world fell and gold has risen to the highest in more than six years. As of January 6, oil futures jumped an additional 3% after the State Department warned of a “heightened risk” of missile attacks near military bases and energy facilities in Saudi Arabia.

The growing discontent over Soleimani’s assassination immensely increased the fears of a new large military operations between Iran and the US with #WorldWar3 hashtags trending on Twitter.

The neighbouring states in the Caucuses are looking on nervously. A major military conflict in the Middle East is bound to send shockwaves through the region and is the most dangerous scenario not only for the Middle East but all the regional states in the South Caucasus. Relatively small, these states maintain mostly good partnership relations with Iran, in particular Azerbaijan which has targeted Iran as an economic partner and already has significant joint investments and infrastructure projects.

Unlike some Western countries and media outlets, which have taken controversial positions mixed with shock following the assassination, Turkey and Azerbaijan have openly expressed their condolences for Soleimani’s death. Armenian Ministry of Foreign Affairs emphasized the, “need for a diplomatic and peaceful solution to this crisis,” in contracts to the Georgian Minister of Foreign Affairs, an American ally, stated that, “the United States has the legal right to protect its citizens.”

At first glance, the assassination of general Soleimani can be seen as a logical reaction to the recent attacks on the US Embassy in Iraq organized by a pro-Iranian group. Obviously, the Trump administration has its eye on the opportunities to discredit Iran globally and Trump has his eye on the up coming presidential elections. However, the positive outcomes of this action for the US national interests and for regional partnership are still in question. Another war in the Middle East and its aftermath would cost hundreds of billions of dollars and do irreparable damage to relations that were already deteriorating following Washington’s decision to reimpose sanctions on Tehran unilaterally. Indeed, the US standing in the Middle East is increasingly being usurped by Russia. Nearly with all regional partners are likely refuse to pursue an anti-Iranian foreign policy, which could easily lead to a fresh war.

Fuad Shahbazov is an independent analyst in Baku

CAUCASUS BLOG : What can Biden offer the Caucasus and Stans, all but forgotten about by Trump?
LONG READ: The oligarch problem
COVID-19 and Trump’s indifference helped human rights abusers in 2020

ING: Russia balance of payments: supportive of ruble in the near-term, but risks for 2H21 mount.
2 days ago
ING: Growth in the Balkans: from zero to hero again?
8 days ago
FPRI BMB Ukraine: Most Ukrainians are optimistic about 2021 – poll
9 days ago
COMMENT: Record high debt levels will slow post-coronavirus recovery, threaten some countries' financial stability, says IIF
11 days ago
COMMENT: The Manafort Pardon: a finger in the collective eyes of Ukrainians
16 days ago