On July 1, 2020, Romania was supposed to remember that 15 years ago its currency was re-denominated by cutting four zeros from its previous denomination. One new leu (known also as RON, or “leul greu” — “heavy leu”) replaced the old leu (also known as ROL) in a quasi-monetary reform. However, the event passed conspicuously unobserved. The mass media from the country was also very anaemic in marking such an event. It was very clear that exchanging 10,000 ROL for 1 RON was not an event to be celebrated either by the National Bank of Romania (BNR) or by the Romanians themselves, as it signified the loss of purchasing power of a currency of a country in transition to a market economy. Despite all this perception, the actions taken by the BNR were adequate at the time and had lasting economic and emotional consequences for the entire population and for domestic and international markets.

After many years of artificial exchange rates and in the aftermath of the December 1989 events, the new authorities introduced very bold measures regarding the foreign exchange regime aiming for the leu’s convertibility. First of all, the very restrictive foreign exchange regime was relaxed during the last days of 1989. The restrictions regarding the holding of foreign currencies were abolished during the December 1989 revolution. Also, on February 1, 1990, the commercial and non-commercial exchange rates were unified at ROL21.00 to the US dollar (from ROL8.74/USD for the non-commercial exchange rate and ROL14.23/USD for the commercial one, as historically recorded as of end-January 1990). Nevertheless, the level of ROL21.00/USD was not the equilibrium exchange rate for the leu. It started then a very long and tumultuous road to find its equilibrium level and to avoid parallel exchange rates which were a defining features of the currency during the last decade of the socialist era. Those dramatic evolutions of the leu were a clear reflection of the sharp economic decline registered by the economy after 1989 and of a spiralling inflation-depreciation cycle.

Moreover, during this period, the leu’s exchange rate was frequently “frozen” or, in more precise terms, it was “manipulated”. The leu was over-appreciating in real terms and the gap between the nominal exchange rate and the effective one started to widen. The trust of the population in the leu sharply declined. The run after US dollars had already started. The “dollarisation” of the economy became a common and almost continuous feature. Looking back, this could be considered one of the most difficult periods in the leu’s history. Its dramatic evolution up to re-denomination in July 2005 is best illustrated if the end-1989 exchange rate of ROL14.44/USD is compared with ROL29,100/USD as of end-2004. Romania was not alone in such exercises of re-denomination and Ukraine is another eloquent example in the region. In all cases, the evolution and actions diminished the trust of the population and of the international markets in the respective currency. The leu’s case followed the script.

The level the leu’s exchange rate reached in the first years of the 21st century was not sustainable from many points of view. Accounting systems were clogged with very large numbers (almost impossible to administer with the IT technology available in those days), the cash in circulation was very difficult to handle and, more importantly, the trust of the population in a weaker and weaker leu (printed in banknotes with larger and larger denominations — up to 1,000,000 leu) was running out. Under such circumstances, on July 1, 2005, the NBR took the right decision to re-denominate the old Romanian leu (see below in Fig. 1) and to print a new currency, the new Romanian leu, in what was called by historians a new monetary reform (10,000 old lei were changed for one new leu). The newly denominated leu is also presented in Fig. 1 below. A monetary stabilisation was not the intention of the Romanian authorities as there were no restrictions (like in 1947 and 1949) on the amount of old currency allowed to be changed against the new one. In fact, the old currency was still in circulation in parallel and permission was given to change it against the new currency during a period of six months. Domestic prices were double labelled in both ROL and RON up to end-June 2006.

It is fair to say that the BNR's action facilitated very much the Romanian accounting system and the relevant statistics, but from a cultural point of view, in many places (especially in the flea markets), Romanians still speak about prices denominated in ROL 15 years later. This very confusing situation (especially for tourists, mainly foreigners) just demonstrates the material and emotional bearing of a currency (the leu in this case) on the population’s way of thinking and behaving. Over the last 15 years, the leu has continued to fluctuate in a moderate way and to follow what could easily be called the tumultuous evolution of the Romanian economy. On top of this, the severe international banking crisis of October 2008 left a heavy mark on the leu. The pandemic of 2020 will have no doubt yet another negative impact on its evolution. The graph below is a simple illustration of this evolution to early July 2020 when the leu was quoted by the BNR at RON4.8365/EUR and RON4.2843/USD. And, most likely, the story is not over. 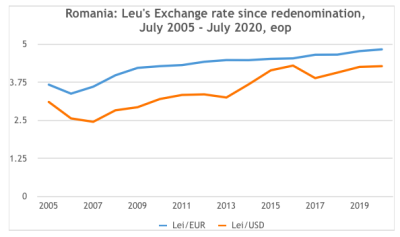 Source: Compiled based on data published by the BNR (Interactive Data Base); end of period

Discussions on replacing the leu

During the last few years, the Romanian authorities launched public discussions about adopting the euro as the country’s currency and joining the euro zone. These discussions were led by politicians rather than by the BNR which should lead this great project. Later on a working group was created under the auspices of the BNR which was expected to submit well documented proposals to the government and subsequently to the parliament. All have been put on hold due to the pandemic which hit Romania starting with January 2020. The fundamental question was and still is if Romania is well prepared for such a huge step. The answer is yet to be given, but a quick review of some key macro-economic indicators is worthwhile.

First of all, Romania registered large budgetary deficits during 2019 (the largest in the EU at 4.64% of GDP) and the prospects for 2020 are not favourable either (some analysts even predict a large deficit of 9-10% of GDP). The increase of the pensions for 5.1mn retired Romanians in September 2020 and of the child allowances will indeed put additional pressure on the state budget. Second, Romania has had and most likely will continue to have large trade and current account deficits. Its foreign debt increased during the last 10 years for which the data from the NBR is available from €90bn as of June 2010 to €107.9bn as of end-March 2020. Third, the Romanian inflation will most likely jump as the launching of the economic recovery is quite slow and hesitant (due to COVID-19 reasons that are well understood). Fourth, the country’s international reserves (without gold) have shown a decreasing tendency lately. The total volume of reserves (including gold) were helped a little bit (plus €1bn in June 2020 as compared to July 2019 for the same gold holdings) by the predictable increase of gold prices during the pandemic crisis, as this is now considered a safe heaven by all states and/or investors. Last but not least, the Romanian economy will contract this year according to the IMF’s and the World Bank's most updated projects (-5.8% in 2020 according to the IMF World Economic Outlook Update - June 2020 for all Emerging and Developing Europe, a group of countries in which Romania is included).

Under such circumstances, the Romanian authorities should focus on how to deal with the re-launching of the economy in parallel with the well-grounded relaxation of the stringent measures imposed, like in many other states, during the great lockdown. Also, key priority should be given to investments in infrastructure projects for which European Union financing is possible. An allocation of €33bn (of which €19.6bn as grants and the rest as loans) was preliminarily designated for Romania, out of the €750bn Recovery Fund against the negative impact of COVID-19). Full absorption of these funds will not only be needed for the welfare of the whole society, but will also have a positive impact on the answer to the question of acceding to the euro zone as and when feasible and opportune. Domestically, a set a key measures should be implemented as well before the answer to the question is given. A well-documented professional proposal is required from the NBR before any political decision.