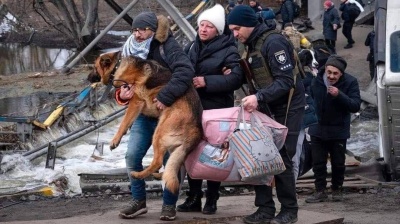 European countries that have taken in millions of Ukrainian refugees could raise money by issuing sovereign sustainable bonds. Investors say they are interested. / wiki
By Gary Kleiman of Kleiman Intl Consultants Inc June 30, 2022

Ukraine’s war displacement with 7mn refugees, and even more internally in flux, is the world’s largest, according to the UN refugee agency. In three months the total has outstripped Syria, Venezuela, Afghanistan and South Sudan over more than a decade. One hundred million are now in conflict and natural disaster flight, with Europe a source for the first time since the Balkans fighting in the 1990s. During that episode approximately 20% of arrivals permanently relocated to neighbouring states after filing asylum claims in a haphazard, lengthy process.

Ukrainians, by contrast, were granted blanket EU protection for two years under a common policy. The influx has gone far afield, including 50,000 to Greece, which continues illegally to push back by land and sea Middle East entrants through Turkey, according to human rights groups. The main host is Poland, which has a long history of worker migration and has absorbed over half the refugees, or close to 4.5mn, with 2.5mn staying. Warsaw and other major city populations are up in the 20% range, with housing 40% more expensive under an exacerbated shortage dating back two years for the real estate industry. 500,000 families temporarily opened their homes after the government offered a modest stipend, and it has created a Social Integration Ministry to manage longer-term budget and policy responsibility. Romania, Hungary, Slovakia and Moldova have taken in 700,000-900,000 each under their own fiscal power, with help from Brussels that follows traditional government aid and supranational bond fundraising.

The EU estimates the total frontline state cost for the first year at a baseline €30bn or more than €5,000 per refugee, and it has tapped money from long-standing migration funds and issued a €1bn social impact bond, an instrument also used for health purposes during the pandemic. Hosts have scrambled otherwise for cash that has run out after the initial wave. Warsaw’s mayor went on an official and private fundraising tour in the US. Moldova applied for a $200mn supplement to its existing IMF programme. And Bulgaria’s search came up empty as it stopped reimbursing hotels lodging Ukrainians.

Capital markets have not been tried as a large-scale, repeat source of funding, even though Poland, Hungary and Romania are investment-grade destinations and already tap normal local and external debt markets. Sovereign bond issuance now is one-fifth in the green and social-sustainable category, where displacement is an overlooked natural fit. An explicit UN 2030 Sustainable Development Goal is orderly migration, and its Compact for Refugees calls for sweeping private finance solutions to individual crises and the refugee agency’s chronic multi-billion-dollar budget shortfall.

Poland with the biggest concentration of refugees and the most sophisticated capital market in the region is the logical testing ground for refugee bonds, and municipal and national pilots could be rolled out simultaneously. The impact collaborative Refugee Investment Network, the International Rescue Committee’s innovative finance lab, and US family offices with an ESG leaning have shown interest in a six-month accelerated development plan with three phases. The initial one would involve working with the Polish government, banks and institutional investors to canvass views from EU and global official lenders, private mainstream and impact fund managers, and humanitarian relief agencies. A detailed concept paper would then be prepared outlining instrument options and monitoring features, including guarantees from multilateral and bilateral sources, and third-party auditing of proceeds use to ensure best practice in education and employment, and cash flow recovery from housing and utilities for debt service. The final step would be prospectus preparation and issue placement by a professional legal-underwriting team willing to forego full commercial fees for public purpose, and in return for establishing a first-mover franchise advantage.

Poland had the top emerging markets Europe non-resident local bond inflows up to the end of May at $2.5bn, as the central bank is on a tighter rate course and also hinted at currency intervention to quell double-digit inflation. Outside rising food and fuel costs, consumption continues to run at breakneck pace, with retail sales up 15% monthly on added refugee demand. The government finally reached a compromise with Brussels on alleged court packing to secure the release of EU recovery funds that can be partially used for Ukrainian local community projects, especially green energy transformation given heavy coal reliance. It has strained relations with banks by offering mortgage holders a repayment holiday over the monetary tightening cycle through next year, which caused stock listings to plummet 30%. That decision came after judicial rulings ordering compensation for post-2008 crisis Swiss Franc-denominated borrowing, and bad blood lingers that could be remedied with a cooperative effort on displacement sustainable bonds.

Romania too has hiked rates to a 3.75% benchmark highly negative in real terms with 14.5% inflation, on expected 3% growth and an 8%/GDP current account deficit. The currency fell 8% against the dollar up to mid-June, as the Brussels report card on euro entry moved it to the back of the line with the enduring shadow of the excess deficit procedure. It has covered the cost of almost 1mn Ukrainians by allocating €100mn in unused EU cohesion funds, and €18mn from its own budget. ESG bonds on the stock exchange have caught on with two leading banks in June floating green versions at 9%, a modest premium to the government’s standard five-year issue. Both Romania and Poland are primed to experiment with breakthrough refugee instruments that draw on market strengths and plot a fresh sustainable bond label course.

COMMENT: Emerging European tightening cycle coming to an end
1 day ago
COMMENT: Does Russia have any friends left in Southeast Asia?
5 days ago
COMMENT: Will an Italian right-wing victory in upcoming elections be another win for Putin in Europe?
5 days ago
COMMENT: War as a sign of weakness: failure of reforms and of branding of a Russian nation.
12 days ago
HESS: Putin doesn’t fit with China’s plans for an alternative global financial order
13 days ago