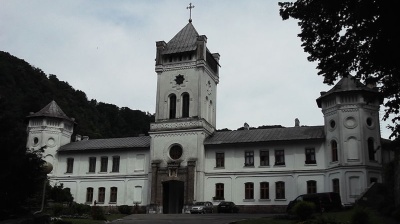 During the Second Word War, the Romanian gold was hidden in the country in a cave at Tismana Monastery (pictured).
By Alexandru M. Tanase in London November 24, 2020

The issue of Romania's foreign debt has been signalled many times in this column, especially after 2016, when its level rapidly passed the threshold of €90bn. In those days, the actual level was considered to be “close to the brim” and measures were recommended to control the speed at which the debt was rising. It seems that the Romanian authorities did not focus on this and the 2020 pandemic found Romania in a difficult position from this point of view. One year ago, in November 2019, a new government led by the National Liberal Party was formed and there were hopes that the external debt would be controlled. But it was not to be. As presented below, the actual level has increased quite fast during the last year. It is estimated that the ratio of external debt to GDP climbed from 48% to more than 56%. This is a sizeable rise, which was also accelerated by the decline of GDP this year. The IMF predicted that the Romanian GDP will contract this year by 4.8%. There are more alarming estimations going up to -10% as the pandemic has continued to evolve out of control in the fourth quarter of 2020.

The upcoming parliamentary elections on December 6 are yet another major risk in the fight to control the spread of the disease. The new level of external debt of €117.2bn (of which €83.6bn is long-term) was rightly signalled by the National Bank of Romania (BNR) in November this year, but there is no guarantee that the politicians will listen to the central bank. This is normally the fate of such correct signals during election periods, but the risk of too much foreign debt is too high to be ignored. The gap between the level of foreign debt and the international reserves (without gold) increased as shown below in Graph 1. 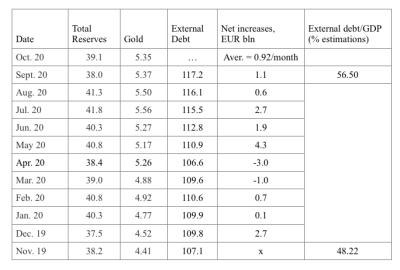 Source: Computed based on BNR’s database; GDP figure from INS for 2019 is provisional and for 2020 is an unofficial estimation.

There are currently intense debates in Romanian society regarding the current level of the external debt, about the fact that such a large debt was run up mainly for consumption rather than for investments, the cost of borrowing from abroad rather than accessing the EU funds designated for Romania and, more importantly, on who is going to pay this sizeable debt. The most striking feature of the Romanian debt is the increase of its public share, which is the external debt contracted directly by the Ministry of Public Finance and the local public administrations (€49.1bn as of end-September 2020 compared with €39.4bn as of end-2019).

Source: Computed based on BNR’s database

This debate is not something new. Even during the socialist era, the level of external debt was a clear concern for large segments of population. During the recent publication of some of the Securitate (secret services) files, one case came to light about a protest in Brasov by ordinary citizens regarding the high level of foreign debt in 1981 (see Fig. 1 left).

Figure 1: Romania - A page from a Securitate file (1981) on foreign debt and gold artefacts

Source: CNSAS - Selection from files of former Securitate - 2020 and the National Museum of Romania

However, the level of this indicator was then a mere $10bn. Now, at €117bn, the level of the foreign debt does not seem to be a priority for the Romanian authorities, which are basically borrowing in foreign currencies from abroad and domestically at a rate of almost €1bn per month. However, future generations will have to pay it back.

Among all this disturbing news, there is a ray of hope which is related to the price of gold on the international markets (see Graph 2). Romania currently has holdings of 103.6 tonnes of gold which are valued at above €5.35bn (market price as of end-October 2020). Together with the foreign currency reserves at €33.7bn, the total of international reserves stood at €39.1bn as of end-October 2020 (some 33% of its total gross external debt). This good ratio should be preserved. 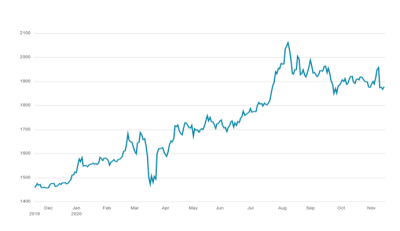 The story of the Romanian gold is extremely convoluted, going back to Roman times. In modern days, it started with the transport of all Romanian gold to Moscow during the First World War (WWI) in 1916-1917. It was more than 100 tonnes in gold bars, precious coins and other artefacts of the national patrimony, including personal possessions and documents of Queen Mary of Romania. Only a few items (see Figure 1 right) were returned. The Soviet authorities declared many times that they had no knowledge of the fate of the Romanian treasure. More than 100 years later, Romania is still without its old national treasure which at current market prices would be valued at more than €5bn. At a heavy price indeed, the lesson was learned. During the Second Word War (WWII), the Romanian gold was well hidden in the country in a cave at Tismana Monastery (see Fig. 2).

This proved to be much safer, as all the gold was returned to the vaults of the BNR. Later, some of it was deposited abroad in London at the Bank of England. Irrespective of the price (which most likely will continue to fluctuate) gold has played and will continue to play a key role in ensuring Romania’s external equilibrium.

Soon after Romania started its transition to a market economy back in December 1989 with zero foreign debt, international reserves of $1.89bn and $100mn of gold holdings, the attitude of the Romanian authorities was that we have to borrow to modernise the country’s agro-industrial potential and infrastructure and to boost consumption. This was well understood. Then many governments came to office with promises that the economy will be reopened and investments stimulated. However, investments did not materialise in all sectors or were insufficient. On top of everything, the 2020 pandemic hit the Romanian economy and society strongly. Borrowing (internally and externally) continued at a much accelerated pace, but as soon as the pandemic is over (hopefully in early 2021), measures should be implemented to control the foreign debt. The access to EU grants and/or reimbursable funds, including those designated by the EU to fight the current pandemic, should be a high priority for the government. Any delays in this respect, as registered in the past, will not help Romania or its industrious people.

OUTLOOK 2021 Romania
25 days ago
LONG READ: The oligarch problem
1 day ago
OUTLOOK 2021 Armenia
2 days ago
One of Russia’s biggest wood product companies, Segezha could be Sistema’s next IPO
2 days ago
COVID-19 and Trump’s indifference helped human rights abusers in 2020
3 days ago