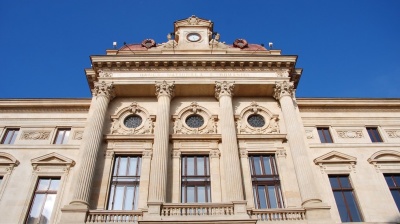 Romania's total gross foreign debt has reached €103.1bn, according to the National Bank of Romania (pictured).
By Alexandru M. Tanase in London June 17, 2019

Since February 25 when my last comment on Romania’s foreign debt was published by bne IntelliNews, many dramatic changes have happened on the country’s political scene. The president of Romania’s largest party who was also the president of the Chamber of Deputies was sent to prison. The race for the presidency of the Social Democratic Party (PSD) is wide open. On May 26, the Romanian electorate gave a stark warning to the leftist parties of the country during the elections of the 32 Romanian members of the new European Parliament. Support for the PSD was clearly on a declining trend, with especially the vote outside the country (by the Romanian diaspora) being cast in favour of new political forces. Meanwhile, nobody paid any attention to a much more concerning trend, namely that of the fast increase of the Romanian foreign debt. More seriously, perhaps, some Romanian political and academic circles took the view that Romania’s foreign indebtedness could be much higher. Nothing could be more wrong or dangerous!

In two comments published by bne IntelliNews in September 2018 and February 2019, respectively (A concerning increase of Romania’s foreign debt and Romania: Two 100s and still counting), I expressed clear concerns regarding the increasing trend of the Romanian foreign debt (in parallel with domestic debt). If anything, since then, as mentioned above, the trend has continued unabated and at a faster pace. According to the figures published on June 13 by the National Bank of Romania (NBR), the total gross foreign debt of the country reached €103.1bn, which was above the level reached in April 2013 of €102.7bn, considered so far an absolute peak. In absolute terms, this is a sizeable increase of €3.7bn as compared to end-2018. However, despite all of this, Romania’s foreign debt is still treated by the current Romanian political authorities as a benign issue. During the last three years alone, total foreign debt increased from €92.9bn as of end-2016 to €98.5bn as of end-2018 before reaching €103.1bn as of end-April 2019. Such a fast increase will have lasting and/or dramatic consequences and it will be a clear burden on generations to come. In addition, the emigration of the young Romanian workforce (some 5mn have left Romania) gave also a heavy blow to the country’s industrial, agricultural and, more generally, to its economic potential.

This worrisome increase was a direct result of very populist measures taken by the PSD governments (supported by its coalition partner ALDE) to increase salaries in the public sector (their average is currently higher than that of the private sector), to grant higher and/or special pensions to larger and larger segments of the Romanian society and to increase the subsidies for political parties for various elections past (May 2019) and future (November 2019). The cost of special pensions granted to parliamentarians, magistrates and other categories is estimated at €1bn per year and even more concerning is that this is envisaged to be extended to a wider range of beneficiaries at local levels (mayors, etc.). Their elimination and/or higher taxation is imperative. The state budget was finally approved very late in March 2019 after a lot of political wrangling and many large cities of Romania (starting with its capital Bucharest) have serious financial difficulties (“undeclared bankruptcies” according to some key mayors). The poor revenue collection was also a result of appointing very inexperienced managers at National Agency of Fiscal Administration (ANAF), the state revenue collection agency. The dismissal of such inexperienced management was finally done in June 2019, but precious time was lost in revenue collection for this year.

Romanian society should understand that living on debt (in this case, on foreign debt) is only a palliative solution. This is what Romania was doing over the last three decades since the events of December 1989. Sooner or later somebody should pick up the bill and repay the debt. The graph below is a very expressive illustration of the worrisome trends of the foreign debt, on one side, and of the international reserves, including gold, on the other side. The gap between foreign debt and international reserves has increased. The level of the international reserves alone decreased in absolute terms from €34.2bn as of end-2016 to €33.7bn as of end-April 2019. Moreover, the service of the foreign debt required payments of €22bn during the first four months of this year, according to the NBR. Two more key indicators: the foreign debt service ratio and the coverage of imports with international reserves also worsened to 16.6% (from 21.2% in 2018) and to 4.8 months (4.9 months as of end-2018), respectively. The coverage of short term debt with international reserves also declined during the first four months of 2019. The Romanian authorities should be concerned on all these counts, but this has not been the case so far. Under such circumstances, it is very likely that the government will have to borrow externally, as its relationship with the commercial banks in the country is at a very low level. The ROBOR scandal, to cite just one example, and many other populist measures contributed to this. 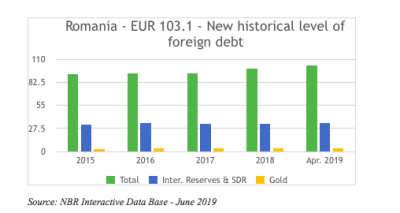 Also, as previously signalled, the structure of the Romanian foreign debt by maturities suffered major changes during the last five years. For instance the share of long term debt decreased from 80.41% as of end-2013 to 67.78% as of end-April 2019, while the share of the short term liabilities increased accordingly during the same period from 19.59% to 33.22%. This could be risky as the service of the short term debt tends to be more difficult to anticipate, service and control. Moreover, the news that Romania might consider selling some of its gold (103.3 tonnes as of May 2019), even if not true, had very negative connotations. A legislative initiative to bring the Romanian gold from London (some 60% of total holdings are deposited with the Bank of England) to Bucharest has unclear status in the Romanian parliament as one of its initiators is now in jail.

Starting from January 1, Romania holds the rotating presidency of the Council of the European Union for six months up to June 30, but the achievements have been very modest. Also, starting with 2018, a set of measures to adhere to the euro zone were announced by the Romanian authorities, but unfortunately this process is not driven by the experienced staff of the NBR, as it should have been. The fiscal sector of the country should be put in order first and foremost. All in all, the actions and results so far have not been very encouraging. There is an evident lack of experienced governmental staff or lack of will to handle such tasks properly.

It is fair to mention that compared with other countries in transition, Romania is not a heavily indebted country. There are various estimations of the increasing ratio of its foreign debt to GDP, with many such ratios being computed to around 50%. However, Ukraine, Moldova, Hungary, Bulgaria, Serbia, the Czech Republic and others have much higher ratios. Nevertheless, the set of immediate measures to be taken by the Romanian authorities mentioned in the quoted articles (increase exports, develop tourism, attract more foreign direct investment, full absorption of the EU funds, re-develop the industrial and agri-business potential of the country, introduce more favourable treatment of the inflow of remittances, abolish or heavily tax the special pensions, etc.) should be treated as being needed now. All of those proposed measures are more valid than ever, but the focus of the Romanian authorities has been more on justice and the forthcoming presidential elections than anything else. This is not the right direction and therefore millions of Romanians are disillusioned with the current Romanian authorities. Hence the sharp changes in voting during the European Parliament elections in May 2019. Avoiding unsustainable populist measures and control of foreign debt should be a national priority, but the politicians in power do not want to hear this. Currently they have other priorities which are not in consonance with the will of the electorate, but this will be taxed soon by the voters.

Alexandru M. Tanase is an independent consultant and former associate director, senior banker at the EBRD and former IMF advisor. These are personal views of the author. The assessments and views expressed are not those of the NBR and/or of any other institution quoted. The assessment and data are based on information as of mid-June 2019.

Global demand for electricity is projected to surge over 20% this decade. Power generation accounts for 40% of emissions and Emerging markets, notably China and India, will account for over 85% of rising demand in the next ten years.

It is now over a year since the Romanian government, in December 2018, unexpectedly introduced draconian taxes across different sectors, which sent equities into a spin. Yet it finished the year with a 39% return on equities.