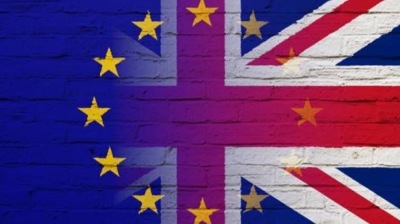 Brexit will affect trade volume amounts, on average, to 0.9% of total output of the EBRD countries
By EBRD in London March 29, 2019

Newly published EBRD research finds that a significant proportion of value chains within the 12 EU countries where the Bank operates, and also in Turkey as a member of the EU Customs Union, could be affected in an event of an exit of the United Kingdom from the European Union with no deal.

A no-deal Brexit could have extensive effects, not only on direct trade between Turkey, the EBRD countries in the EU and the United Kingdom, but also on indirect exports through value chain integration within the European Union. An example of such a value chain would be car parts exported from the Slovak Republic to Germany, assembled there and then exported as a final product to the UK.

EBRD economists’ analysis based on the ’Trade in Value Added’ (2018) OECD database shows that in the case of the UK leaving the EU under a no-deal scenario, 6.8% of the EBRD countries’ domestic value-added exports would be affected by potential disruptions to direct and indirect trade linkages with the UK. The share would be even higher for Cyprus, Turkey and Poland, for, which the British market accounts for 7.9 - 9.1% of total export volume. In absolute terms, both Turkey and Poland would face the highest exposure to trade disruptions with domestic value-added exports of around US$12bn being directly and indirectly exported to the UK in 2015.

The 12 EBRD countries that are part of the EU, plus Turkey could also face modest value chain disruptions in certain economic sector exports in the event of a no-deal Brexit, as various trade barriers would evolve and disrupt supply links between industries in the UK and the EU. In absolute terms, the EBRD countries have a higher exposure to trade disruptions in value chain linkages with the UK than vice versa. $7.5bn of British inputs, mostly business services, were used as inputs in the production process of manufacturing exports of the EBRD countries in 2015. The UK also relies on foreign inputs for exports, but sourced only US$4.8bn of foreign inputs from EBRD countries in 2015, much of it for the UK’s transport industry.

Global value chains data for this study was collected by EBRD economists in the context of diagnostic analysis for the EBRD Value Chain Competitiveness Programme, supported by the EU Neighbourhood Investment Facility South. 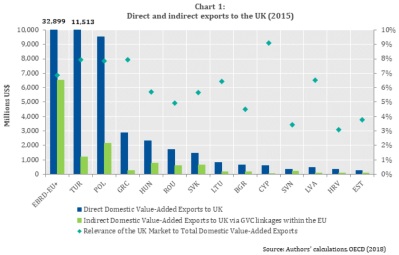 ING: Russia balance of payments: supportive of ruble in the near-term, but risks for 2H21 mount.
4 days ago
ING: Growth in the Balkans: from zero to hero again?
10 days ago
FPRI BMB Ukraine: Most Ukrainians are optimistic about 2021 – poll
11 days ago
COMMENT: Record high debt levels will slow post-coronavirus recovery, threaten some countries' financial stability, says IIF
13 days ago
COMMENT: The Manafort Pardon: a finger in the collective eyes of Ukrainians
19 days ago