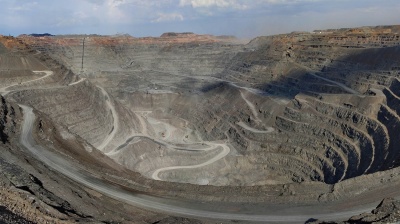 The Navoi Mining Company is one of the biggest gold and uranium mines in the world and is slated along with other valuable companies to be sold to investors.
By Fiezullah Saidov director of Uzbekistan Equities in Tashkent June 2, 2021

In May 2021, Uzbekistan's State Asset Management Agency (UzSAMA) and the World Bank arranged a high-level international forum held in Hyatt Regency Tashkent to lay out the roadmap for Uzbekistan’s privatisation of some of its most valuable companies.

The quality of the audience was a sign of the government’s commitment to making privatisation a success. Amongst the attendees from the Uzbek government were: Jamshid Kuchkarov, Deputy Prime Minister and Minister of Economy and Poverty Reduction; Timur Ishmetov, the Minister of Finance; Omonulla Nasretdinhojaev, first Deputy Minister of Finance; Adham Ikramov, the chairman of the Chamber of Commerce and Industry, and the chairman of UzSAMA, Akmalhon Ortikov.

High-level international participants were also well represented, including the World Bank’s Central Asian vice-president Anna Bjerde, the EBRD’s managing director for Central Asia Zsuzhanna Hargitai, and Sir Suma Chakrabarti, ex-chairman of EBRD who is now working as an advisor to the President of the Republic of Uzbekistan on Economic Development, among many others.

The keynote speaker of the event was HE Deputy Prime Minister Jamshid Kuchkarov, who set the tone to the forum by declaring the goal of the government in the mid-term: the government wants to increase GDP per capita from the current $1,700 to $2,500 in 2025 and $4,200 in 2030 and this would require GDP growth of 6 to 7% per annum.

As bne IntelliNews reported in the feature “The Growers,” in 2020 Uzbekistan was one of a handful of countries in the world not to go into recession despite the coronavirus (COVID-19) pandemic, due to economic reforms that were launched prior to the pandemic and timely funding from international financial institutions (IFIs) to soften the economic blow of the pandemic.

The government sees the path to achieving this growth by attracting more private funding to the economy; hence the government needs to sell assets. To obtain better prices for the assets, they would like to transform the largest state-owned enterprises (SOEs) in the country and improve their efficiency.

This work has been spearheaded by the Ministry of Finance jointly with UzSAMA and this forum was more of a status check on the progress of this work.

The event was co-arranged with the World Bank to show the commitment of the IFI community’s active involvement in the process and their support of the Uzbek government campaign.

The IMF Head of Mission pointed out that Uzbekistan is running a current account deficit and it is currently being financed from international borrowings, and these should be replaced or complimented by equity investments. In the case of Uzbekistan, where most important sectors are state-dominated, transformation of SOEs and privatisation of these assets seem to be the most natural next steps to alleviate the debt burden.

But despite the upbeat talks and serious attitude of the delegates, the proof of the pudding will be in the eating. The Big Four consultants and investment banks, such as Rothschild’s, which is particularly active, are already deeply involved in the transformation, valuation and in sell side advisory roles.

Minister of Finance Ishmetov during his speech noted that one large bank will be sold by the end of this year, the regional flagship Coca Cola bottler based in Tashkent is in the process of a sale and Navoi Mining (one of the largest gold and uranium producers in the world, bringing in 30% of the budget of Uzbekistan) is undergoing corporate governance actions and transformation as well.

Ishmetov pointed out that the government was a bit hesitant after deciding to bring in independent directors to fully state-owned banks, but now they see the positive results and are considering appointing another 100 senior managers to state-owned companies. The plan is to sell some 550 state-owned companies by the end of this year and several auctions for large real estate assets have already started.

Ortikov, the chairman of UzSAMA, showed a list of top 10 most profitable companies and bottom 10 largest loss-making companies in the country. The solution to the issue seems to be further reforms of the sectors, attracting the private sector as better managers of these assets and increasing profitability, at the same time dealing with social issues related to large layoffs.

The issue of transparency and public accountability came up during the event several times, raised by both by Uzbek government and the international community participants. UzSAMA is committed to transparency with the open declaration of potential buyers and their history, and where the privatisation proceeds will go to. The IFIs involved in the process, working with the Uzbek Government and UzSAMA, should help to address these issues.

Another key issue raised during the forum was underdeveloped legislation. The privatisation law was adopted in 1991, and this year the government is working on new law that should be adopted by the end of the year.

The question of fair valuation was also raised, where the local valuation standard tends to value assets higher than the market value. The government has already nixed a mandatory requirement of adopting the local valuation as the auction minimum starting bid to throw the process open to greater competition. But that means local standards will have to be brought up to international levels and it will take time.

Overall, the event was phenomenally successful due to the large attendance and very senior government officials present from the beginning till the end of the event. That allowed them to listen to all sides of the issue. This was a good case of a dialogue and co-operation with the international community.

To take a concrete example, the privatisation of a chemical company is difficult until natural gas prices, distribution network regulation and electricity market de-regulation have all taken place.

The question of if the government go fast and perhaps sell at a lower price to leave the transformation to the strategic investor that acquires the asset or take all the measures (legislative, transformation, corporate governance, transparent reporting) first in order to command a higher asking price remains open.

As the event showed, the IFIs are on board with the government to help find the right balance to this tricky question.