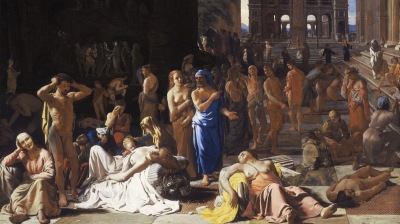 Today Covid-19 risks breaking up the foundations of business in our modern interconnected world
By David Landsman OBE and Khawar Qureshi QC in London September 2, 2020

Ever since the plague in Athens in 430 BC so graphically described by Thucydides epidemics have followed movements of people and changed the course of history.   Today Covid-19 risks challenging the foundations of business in our modern interconnected world.    With disruption comes both risk and opportunity.

Now that the traditional distinction between domestic and foreign policy has been eroded, .   Governments are driven to do all they can to protect their citizens at the expense of international relationships – and even formal obligations.    Almost everywhere, measures unprecedented outside wartime have been introduced, even if the political and legal form varies depending on local taste.   Europeans who saw openness as their defining characteristic were swift to close borders.   Some of these measures have already been at least partially reversed, but there lurks danger in the old maxim rien ne dûre que le provisoire – nothing lasts like the temporary.

It is worth remembering that there are precedents for international cooperation in the face of a infectious disease. During the Cold War, the US and the Soviet Union worked together on a vaccine for polio and eradicating smallpox. The US played an important role in mobilising international action to combat AIDS and Ebola in Africa.

By contrast, Covid-19 has seen a significant breakdown in international cooperation, as countries rush to apportion blame, deflect criticism of their own response, and secure urgently-needed resources. While multilateral organisations like WHO and ad hoc alliances (such as GAVI for vaccinations) remain more influential than may at first sight appear, few governments have entirely resisted the temptations of a “nation first” approach.

While some consequences of the political fallout - particularly the damage to US-China relations -  are of strategic geopolitical concern, business has much to be concerned about in apparently lower-order upsets to international trade.

Many states have adopted measures restricting the normal flow of people and goods across borders alongside other public health measures and exceptional regulations to protect domestic companies.   For example, in Spain an emergency decree allows the authorities to intervene and occupy production units and private healthcare facilities and to issue orders ensuring the supply of goods affected by shortages.  These are far from unique: similar measures have been adopted in other countries, including Switzerland Italy and the US.  Such measures, while potentially justifiable, may give rise to legal challenges as breaches of ‘fair and equitable treatment’ protections for foreign investors under bilateral and multilateral investment treaties.

Risks also  lurk in the impact of emergency measures on contractual arrangements if they lead to a company being unable  to meet supply targets or deadlines, or to provide services under an existing contract. The concept of force majeure (by which performance of an obligation is excused where a contractually defined ‘force majeure event’ occurs) is likely to be crucial in discussions as to whether performance according to the contract is still required in today’s climate. It has been reported that China’s Council for the Promotion of International Trade has issued thousands of so-called ‘force majeure certificates’ purporting to certify that a Chinese entity was unable to undertake specific acts towards the performance of a contractual obligation.  It remains to be seen whether those certificates will be recognised and what weight they will carry in dispute resolution forums outside of China.

The long-term impacts will be wide-ranging, as demands for resilience lead to shortening of supply chains.  “Nation first” habits may become harder to shake off particularly in the wake of a protracted global recession.  Countries which offered emergency assistance were able quickly to gain diplomatic points which may translate into longer term influence, which may impact business. Indeed for some countries - including maybe in Europe - there may be an attraction in repackaging Covid-related measures for other purposes, for example to help meet climate change targets.

Business leaders may hope that their contractual disputes will continue to follow a well-trodden path into domestic Courts, or (more likely) arbitral tribunals.   But COVID-19 risks broadening the context in unprecedented ways, injecting unpredictable new domestic and international political considerations. Moreover, with public health concerns unlikely to fade soon, there may be unexpected reputational challenges for those who seek to act as though nothing has changed.   The dynamics of Covid-19’s spread took the world by surprise; now, there is an urgent need to understand the dynamics of the inevitable political disruption that follows.

The billionaires club, where the mega-wealthy go to meet each other
US pledges up to €1bn for EU's eastern Three Seas region
Hungarian foreign minister strikes back at Joe Biden with Ukraine graft allegations

COMMENT: Why the Balkan region should be on investors’ radar screens
4 days ago
COMMENT: Improving sentiment in global markets amidst uncertainty
4 days ago
COLCHIS: Georgia’s Karabakh conundrum
5 days ago
FPRI BMB Ukraine: KIIS’ survey of Ukraine’s perceptions of parties and politicians
5 days ago
STOLYPIN: If Lavrov goes, can we hope for better from Russia’s diminished foreign ministry?
5 days ago