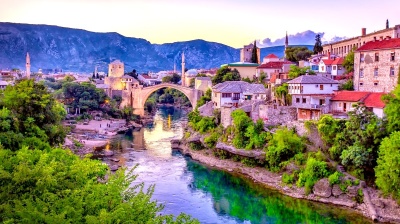 Allowing the SEE-6 to join the EU is a good idea as accession is not just about business
By Gunter Deuber of Raiffeisen Research in Vienna April 8, 2019

At first glance, the enlargement of the EU to include the states of the Western Balkans seems to be an irrelevant trifle for the EU, but on closer inspection it is a good idea as expansion of the EU is not just about business.

The remaining 6 potential accession candidates from the Western Balkans – the so-called SEE-6: Albania, Bosnia, Serbia, Montenegro, Macedonia, Kosovo -- could bring about just over €100bn in total GDP to the EU in the foreseeable future. That would be about the same GDP weight as Slovakia or a quarter of Austria's GDP weight in the EU. Moreover, adding this 0.5 to 1% of the economic output of the EU is distributed over about 18mn inhabitants, which speaks for low GDP per capita levels.

The SEE-6 countries are not exactly prime examples of highly competitive economies. Unemployment rates are high, as is the share of the shadow economy in value added. It is a perfect valid question to ask what is it that they bring to the party? Can these countries really be successful in the highly competitive EU internal market without far-reaching reform?

In terms of per capita income and unemployment rates, the SEE-6 countries are currently at about the same level as the then poorest current EU members were in the 1990s (e.g. Poland, Bulgaria, Romania, Slovakia). One could also ask why the EU should even bother itself with the SEE-6 countries for the foreseeable future in view of the manifold challenges to the unification project.

If they did enter the EU, can the SEE-6 countries catch up with their peers in the next 10 to 15 years in per capita income terms to become comparable to that of Bulgaria or Romania at the time of their entry into the EU in 2007?

The mixture of absolute size and economic development clearly shows from a mercantilist point of view or in terms of expanding the sales market, EU enlargement to include the SEE-6 countries will not generate much immediate economic gains for the EU as a whole in the short or medium term. There is a potential gain from an EU-enlargement to the Western Balkans, but that would probably be concentrated mainly in some of smaller current EU members nearby, e.g. Croatia, Austria, Slovenia, Greece and perhaps Hungary, Bulgaria or Romania. This implies that there is possibly not enough economic lobbying power behind an EU enlargement agenda. Moreover, for the SEE-6 countries there are no direct material short-term gains from an EU entry on the streets. All SEE-6 countries have already redirected their foreign trade and are aggressively targeting the EU. They are already relatively open economies and investors from EU countries already dominate the stock of foreign direct investments (FDI) there. However, the entry of the SEE-6 countries into the EU could help them to strengthen their international integration beyond the EU or to gain international competitiveness in the long term. This raises the question of what is the point of EU enlargement to include the Western Balkans at all?

Enlargement is not all about business. It is more important to clearly recognize the geostrategic strategic dimension of EU enlargement to include the Western Balkans.

Certain attempts by other countries to gain economic (and political?) influence in the region are unmistakable (mainly China, partially Russia, Turkey and some Arab countries on a selective basis). Therefore, such an enlargement would be a first building block to show geopolitical responsibility.

And here, too, the EU should start with small steps and on its doorstep. The EU would have to put relatively little money on the table to consolidate its interests in the SEE-6 countries simply because these markets are so small. This enlargement would be cheap compared to previous rounds. The integration of the SEE-6 countries into the EU would not require a massive redistribution within the framework of existing convergence promotion funds within the EU financial framework.

Actively demanding compliance with EU principles in an accelerated accession process could also make it easier to demand more compliance with EU regulations in existing member states. More importantly, in the context of EU enlargement to include the Western Balkans, the question of the finality of EU integration could be meaningfully discussed or the enlargement agenda could be even closed for years/decade(s) to come. The accession of the Western Balkans would bring the whole accession programme and the aligning of European interests following the collapse of the socialist model in the early 1990s to an end.

This could make sense for the EU in the context of relations with Turkey and Ukraine and contribute to the consolidation of the European integration project. An active enlargement agenda in the Western Balkans could also contribute something to the equilibrium between Western and Eastern EU countries. After all, the Eastern European EU countries were generally in favour of further enlargement. In addition, integration of the SEE-6 countries into the EU will require a further development of a multi-speed integration strategy at the EU level. Above all, the discrepancy between the Eurozone, the EU and the Schengen area will certainly remain large for longer. This also makes it necessary to think about mechanisms that allow selective cooperation in partial areas, while not being part of all integration layers shall not be an element of backwardness.

In the light of the considerations outlined above, it becomes clear that EU enlargement to the Western Balkans should never be justified primarily on economic grounds and no attempts should be made in this direction. It is even in the very nature of the relatively small aggregated economic size of these countries that political arguments can be overweighed here without a guilty conscience. That said, it should be above all in the enlightened self-interest of the EU to proactively pursue the EU enlargement issue in the coming years as it may contribute to the consolidation of the European integration project.