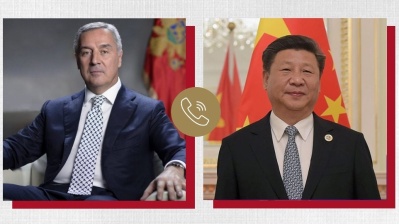 China is ready to negotiate with Montenegro on an extension of the grace period of a loan provided for the construction of the first priority stretch of the Bar-Boljare motorway, Chinese President Xi Jinping said on May 26 during a phone conversation with his Montenegrin counterpart Milo Djukanovic.

Montenegro previously asked the EU for help to repay the loan from China’s Exim Bank, as the coronacrisis put the government’s finances under pressure.

Speaking by telephone with Djukanovic, Xi said “the state organs of China attach great importance to  the realisation of the project, the line of the contract for extension of the period of availability of the funds until the end of 2022, which is a firm guarantee for continuation of cooperation and readiness for the two countries to be in contact regarding the grace period”, a statement from the Montenegrin presidency said.

The statement comes as Montenegro’s government is trying to find a cheaper loan to replace the one from China’s Exim Bank for the construction of the Smokovac-Matesevo stretch of the motorway.

In March, the Montenegrin government said it had asked the EU for help with the repayment of the loan, but received mixed messages and it is not clear whether help will be forthcoming. European Commission spokesperson Ana Pisonero initially said that the EU does not repay debts toward third countries, but later the Enlargement Commissioner Oliver Varhelyi said the EU is exploring options to help Podgorica.

Meanwhile, the Montenegrin government is also in talks with Exim Bank on rescheduling the repayment of an instalment due this summer.

In 2018, Montenegro was listed as one of eight countries at growing risk of debt distress after taking out Chinese loans extended under the One Belt, One Road Initiative (OBOR), according to a study by Washington-based think-tank the Center for Global Development.

The huge cost of the motorway – estimated to be the most expensive road per kilometre in Europe because of Montenegro’s mountainous terrain – in comparison to the country’s tiny economy previously rang alarm bells among international financial institutions (IFIs) and rating agencies.

The previous government increased fiscal discipline in an attempt to prevent a hike in public debt, with Exim Bank as the largest creditor. However, it relaxed the measures at the beginning of 2020, only to come under intense pressure with the start of the coronavirus (COVID-19) pandemic. Its economy is among the worst affected in emerging Europe by the pandemic due to the collapse of its tourism sector, which typically contributes 25% of GDP.

According to the latest figures from the Central Bank of Montenegro, the country’s public debt reached 105% of GDP in 2020, while the budget deficit was equal to 10.1% of GDP.

Although the government in Podgorica was actively managing public debt, its liabilities remained high in 2020 due to the increased costs related to the coronavirus (COVID-19) pandemic and its economic consequences.

“These indicators are a sign of high risk that will be very difficult to manage in the coming period. A significant economic recovery cannot be expected without boosting the generation of spending, particularly of investment [spending],” the central bank warned on May 26.