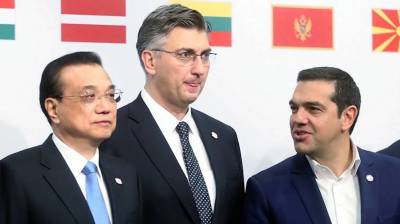 China promised to boost trade ties and to increase financial support for infrastructure projects in Central and Southeast Europe at the annual summit meeting of 16 countries in the region in Dubrovnik on April 12.

The 8th China 16+1 summit kicked off in the Croatian coastal town of Dubrovnik on Thursday with 16 countries and ended with Greece joining as a full-fledged participant. It is the 12th EU state to join the initiative.

Greece joining the group was an obvious decision as China's largest state-owned shipping company COSCO had taken over the Greek port of Piraeus, the main entry point for Chinese goods to Europe, analysts said.

China and the CEE states established a platform called 16+1 cooperation for the institutional coordination of their relations in 2012 under the framework of the grandiose One Belt One Road plan.

On Friday, Chinese Premier Li Keqiang visited the construction site of the Peljesac Bridge, which is one of the largest infrastructure projects in Croatia, with his host Croatian Prime Minister Andrej Plenkovic. It is a model of tripartite cooperation among China, the EU, and Croatia, he said

The consortium led by China Road and Bridge Corporation (CRBC) won the bid for the first phase the project, the total value of which is about €420mn, of which 85% will be covered by the EU funds.

At the summit, Premier Li stressed the importance of reciprocal opening-up of the market. He said China will make further efforts to facilitate trade, including simplifying customs procedures and providing green channels for the export of products from CEE countries.

China has invested about $10bn in the 16 CEE countries, while the reverse figure is around $1.5bn, the Hungarian state news agency reported. Trade between China and the region has jumped by 50% since the cooperation began six years ago and reached $82.2bn in 2018, up 21% from 2017.

Poland and Hungary were the main initiators of the 16+1 Initiative as both countries aspire to become a hub in the transportation corridors between China and Europe. Hungary has a long history of backing China against the EU's plans.

Hungary's self-declared illiberal Prime Minister Viktor Orban has sought to strengthen ties with China as part of the "Eastern Opening" policy launched in 2012, but his endeavours to shift Hungary’s economic and political focus from Western Europe to Asia has yielded little success so far. Hungary's economy remains deeply embedded in EU and trade with non-EU members have grown little since his policy shift was unveiled.

The cooperation between CEE countries and China has rattled Brussels and has been met with a great deal of suspicion. There are voices in some EU capitals that the 16+1 cooperation will weaken the EU by creating new divisions on topics like the EU’s single market.

There are also concerns among international institutions that Chinese investments are to be partially blamed for the mounting debts of East European countries without contributing to their economic growth. The Vienna Institute for International Economic Studies (wiiw) said that Chinese investments could drive major investment improvement, securing a much-needed infrastructure upgrade of Eastern Europe, but this comes with high risk.

However, Chinese leaders say the China-CEE platform will only contribute to China-EU cooperation and to the unity of the EU.

Participants underlined that the 16+1 cooperation constitutes an important part of Europe-China relationship and complements the EU-China Comprehensive Strategic Partnership and the EU-China 2020 Strategic Agenda for Cooperation, according to the final guideline of the summit.

The next summit will be held in China next year

Hungarian PM said cooperation between China and the CEE region “serves true European values with regard to the deep and comprehensive changes in the global economy and global politics”.

He said construction contracts on the upgrade of the Budapest-Belgrade railway line could soon be signed soon. The project is an integral part of the Belt and Road Initiative aimed at promoting free trade, he said.

The planned 350 km high-speed Chinese-funded railway connecting Budapest to Belgrade has the potential to become the main transport route for Chinese and Asian goods that arrive by sea at the Chinese-owned Greek port of Piraeus and head into Europe. The railway is thus considered a flagship project for China to increase its presence in the region.

Critics of the investment say the entire project lacks economic sense and is disadvantageous for Hungary. They claim the country is upgrading a 152 km railway for roughly €2.3bn, plus interest, to fulfill China’s economic vision, with the help of Chinese loans, with the majority of the work done by Chinese companies.