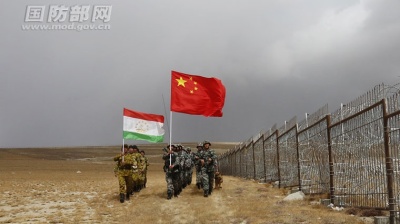 A frontier defence regiment of the Chinese PLA Army and a Tajikistani border defence unit carrying out a joint patrol.
By Kanat Shaku in Almaty June 18, 2020

China’s growing influence over Central Asian economics, politics and security at the expense of Russia—a topic that is revisited repeatedly given its essential strategic import—continues to grab the attention of the region’s geopolitical observers. One of the most recent iterations of this focus came in the form of a report by a Washington-based think tank, the Wilson Center’s Kennan Institute.

The report’s author, Bradley Jardine, indicated to RFE/RL in a recent interview that the traditional “division of labour” between China and Russia—where Russia takes care of security matters and China focuses on economic influence—is fading. The report itself indicates this process is under way in its citation of Chinese military equipment sales to the region. They have come to account for 18% of military hardware in Central Asia in the past five years as opposed to the mere 1.5% in 2010-2014. Despite Russia’s continued military dominance in the region, the report sees the development as significant.

Chinese Y-8 transport plane modelled on the Russian Antonov An-12.

China is also seen as dominating in areas where Russian technology continues to lag, including with reference to the CH-3, CH-4, CH-5 and the Wing Loong armed drones received by Kazakhstan, Turkmenistan and Uzbekistan in 2014-2016, the report posits. The Chinese drones also compete against products emerging from US and Israeli industries.

As Beijing’s investments in the region via the Belt and Road Initiative (BRI) for trade infrastructure, trade and investment continue to grow, it has been seen as inevitable that China will eventually engage in protecting its investments.

Clear signs of the policy are visible in Beijing’s increased military cooperation with Tajikistan. The two countries held counter-terrorism exercises on the Tajik-Afghan border in 2016 and the giant eastern neighbour offered to build several military outposts and facilities. The existence of the Moscow-led Collective Security Treaty Organization (CSTO) and the Shanghai Cooperation Organization (SCO) did not prevent China in 2016 from forming a new group with Tajikistan, Pakistan and Afghanistan to combat terrorism, dubbed the Quadrilateral Cooperation and Coordi­nation Mechanism (QCCM). 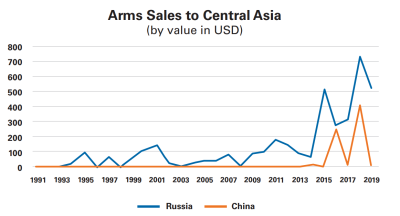 In September 2017, Tajikistan signed an agreement on establishing exchanges of security intelligence between China and Tajikistan during a state visit by Tajik President Emomali Rahmon to China. The agreement is meant to help the two sides combat the threats of terrorism, separatism, religious extremism, drug trafficking and international crime groups by launching professional intelligence exchanges.

Independent think tank International Crisis Group said in 2018 that China has deployed troops in Tajikistan close to a three-way Tajik-Chinese-Afghan border, establishing a “counter-terrorism centre”. The move by China was supposedly aimed at ensuring security against ethnic Uighur militants who have been leaving China to join extremist groups such as the Afghanistan-based Turkistan Islamic Party. 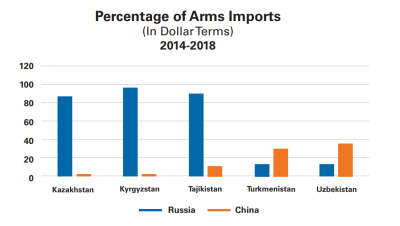 Many observers in Russia do not appear to see China’s expansion as a sign of major aspirations to expand military influence over Central Asia, since much of China’s military cooperation is directed at its concerns over potential Islamic terrorism in Xinjiang and its connection to ongoing conflicts in Afghanistan. The borders of Afghanistan, Tajikistan and China intersect, making China’s presence in Tajikistan seemingly a matter related to China’s Xinjiang concerns rather than a case of a regional military buildup.

An expert from the Russian Institute of Strategic Studies (RISS), Ivetta Frolova, appeared to uphold this view on China in a recent interview with the Central Asia Analytical Network.

“Today, the Chinese leadership faces a number of tasks that need to be addressed taking into account the peculiarities of internal socio-economic development and the promotion of projects within the framework of the Belt and Road Initiative,” Frolova said. “These difficulties are exacerbated due to the situation caused by the spread of coronavirus, in which the whole world is currently enveloped. Therefore, China will have to resolve many more problems before developing strategic plans to build up its military-political presence in any region of the world, especially in such a complex one as Central Asia.”

“It is another matter when the urgent needs within [China itself] do not leave Beijing any choice but to share [a stake in] the efforts of the international community in ensuring regional security,” she continued. “Therefore, QCCM is called upon to contribute to the stable development of the region and to the process of peaceful settlement in Afghanistan along with such organisations as the SCO and the CSTO.” 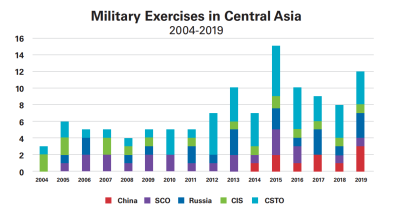 The issue of China's growing Central Asian presence appears to be viewed exclusively through the lens of Russia losing ground as China strengthens. Yet just as China is expanding away from its role as a solely economic leader in the region, Russia also finds itself extending its presence into Central Asian economies.

This can be seen in Russia’s handling of Uzbekistan, which has been attempting to open itself up to foreign investment. Russia’s courting of Uzbekistan covers a range of sectors, including an agreement to handle the construction of a nuclear power plant in Uzbekistan. However, the greatest push by Russia remains its attempt to convince Uzbek authorities to join the Moscow-led Eurasian Economic Union (EEU). Uzbekistan has already agreed to take observer status within the EEU this year and it appears that many parties in the most populous Central Asian state remain convinced that a full membership would benefit the nation.

The Center for Economic Research and Reforms (CERR), a respected Uzbek economic policy think tank, released the results of a recent poll on the attitudes of public sector and private sector Uzbek professionals on Uzbekistan’s potential accession into the EEU. The respondents’ views translated into 74% support for Uzbekistan joining the EEU. The think tank polled 1,300 people. The majority of those polled by the CERR were private-sector representatives and college students (64%) and the remainder were public servants.

The think tank previously led a study on the economic impacts of joining the EEU on Uzbekistan at the request of the country's president, Shavkat Mirziyoyev. It concluded that economic gains and only marginal losses would be expected in all 10 surveyed domestic sectors.

“President Mirziyoyev is likely to listen closely to the conclusions presented by the CERR given that the organization effectively acts as the only economic policy body under the presidential administration,” the Jamestown Foundation, a Washington-based institute for research and analysis, argued. “Indeed, the CERR’s current head, Obid Hakimov, additionally serves as the deputy to the president’s advisor and, in the past, led the administration’s office for the protection of citizens’ rights.”

The EEU also comes with political undertones of dependence on the former Soviet master, but dialogue over these concerns is borderline non-existent. The limited discussions on opposing an EEU membership in independent news outlets and online social media are generally dismissed by the Uzbek government. Moreover, Uzbek officials consistently portray the EEU as the best option for the future of the country and for achieving economic growth.

Uzbekistan's EEU ascension may look like a matter of time, unless it follows the example of Tajikistan and continues to postpone its final decision, despite outwardly expressing interest in joining. Tajikistan is another post-Soviet country seen as mainly benefitting from an EEU membership as nearly two-thirds of its GDP relies on Russia for migrant remittances.

Opposition leader in-exile Sharofiddin Gadoyev told Russian media earlier in 2020 that  Tajikistan's reluctance to join the trade bloc lies in the personal interests of President Emomali Rahmon and the ruling family as the family maintains a monopoly over the Tajik domestic market.

"The monopolisation of the Tajik market by members of the president’s family was created by establishing artificial barriers to competition," Gadoyev said. "Such as unreasonable requirements for standardisation and labeling of goods, refusals to issue licenses and certificates, overstatement of the customs value of goods during customs clearance, constant delays in the customs clearance process, inability for businessmen to appeal against unreasonable requirements or somehow protect their rights and interests."

In this light, Russia and China may have advantages in influencing individual Central Asian nations. Just as Tajikistan seems to prefer China's lead, Uzbekistan may be more eager to forge closer ties with Russia. And, even then, preferences may shift based on changes in the leadership of each country.

Friedrich Ebert Foundation's online magazine, IPG, in an article published in April 2020, argued that Russia is economically incapable of competing against China in the region.

"But Moscow cannot compete with Beijing in Central Asia: the economic structure will never allow Russia to become a major buyer of raw materials," the article written by Temur Umarov reads. "Therefore, on the part of Moscow, [the circumstances call for] competition with the countries of Central Asia for the Chinese market."

If true, Russia's geopolitical control over the region may be inevitably set to wane.