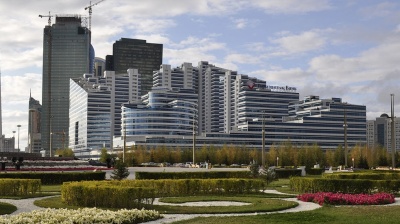 Did the pensions move just put home purchases even further out of reach for many middle class families in Kazakhstan? (Pictured is a property complex in Nur-Sultan).
By Kanat Shaku in Almaty February 28, 2021

The Kazakh government, bidding to keep the deteriorating mood of the population stable amid the impacts of the ongoing coronavirus pandemic, has started allowing some citizens early access to their state-run pension funds for property purchases or other capital investments, such as in securities. A limited number of other reasons, such as medical or education bill payments, can also unlock funds under the measure, brought in in January.

The move aims to make housing more affordable for the Kazakh middle class—but the effect might be just the opposite. This can be observed in the immediate market reaction to it.

New home prices in Kazakhstan rose in January by 3% in monthly terms, while prices of existing homes with full utilities jumped by 5% m/m. The price hike for residential real estate was the highest seen since at least the beginning of 2016. In annual terms, prices of new homes in Kazakhstan grew by 7.3% to an average of Kazakhstani tenge (KZT) 319,252 (€632.12) per square metre at end-January. For existing homes, that annual figure was 17.9%, producing a KZT244,715 price tag.

This lift-off in real estate prices can be directly linked to the new pension fund drawdowns. More than 80,000 requests—between January 25 and February 5 alone—were filed to the state-run pension fund as citizens set out to take advantage of the new opportunity, the pension fund’s figures showed. A total of KZT216.4bn tenge was handed out in response to around half of those requests within the same time frame.

Kazakh President Kassym-Zhomart Tokayev has already responded to the market phenomenon with a call for price regulation to be applied to new residential real estate.

Economist and financier Murat Temirkhanov told Radio Azattyq that Tokayev’s reaction was concerning as the market for new housing appears to be increasingly subject to government control.

“Our market for new housing has effectively become state-owned. All new mortgages come through subsidies from the budget. Although if we take the developed Western countries as an example, then all these are purely market relations. The state must get out of this market. It cannot subsidise developers and mortgage programmes indefinitely. I am concerned that the state does not have a specific programme and long-term vision on these issues,” Temirkhanov said.

The trajectory of housing prices overall may defeat a key objective of the government’s pension access programme as the costs of buying property may end up outweighing the convenience of immediately available funds.
Property price inflation is especially detrimental to poorer Kazakhs who do not have access to sufficient pension savings to properly take advantage of the programme but still have to deal with its negative side effects. That dilemma is visible in rising rental costs, which shot up 10.1% y/y and 1.2% m/m in January.

Fixing the financial woes of Kazakhstan’s population, which has grown increasingly poorer during the COVID-19 crisis, will likely require deeper changes in the system than temporary populist measures such as the pension fund drawdowns.