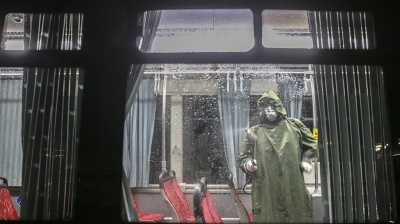 A worker disinfects a bus against coronavirus. Mongolians hope their pandemic nightmare might soon be over. / Fars news, CC-BY-SA 4.0
By Anand Tumurtogoo in Ulaanbaatar November 19, 2021

Mongolians have started to hope that the worst of the coronavirus pandemic in their country is behind them. The past couple of months have brought quite a rapid decline in the number of recorded cases on a daily basis. The consensus seems to be that the booster vaccination programme is having a clear impact. As of November 8, booster shots had been given to around 15% of the population. 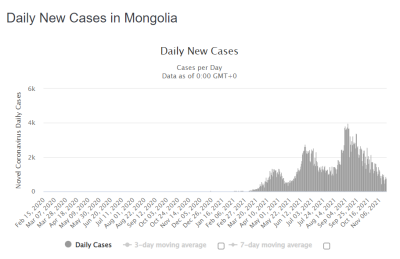 Deputy PM Amarsaikhan Sainbuyan earlier this week at a cabinet meeting presented the latest week on week infection data. Coronavirus (COVID-19) infections were down by 8,987. Sainbuyan also pointed out that Mongolia has one of the lowest fatality rates in the world, ranking 13th out of 184 countries, according to a Johns Hopkins University analysis.

Ulaanbaatar appears to have concluded that a zero tolerance attitude to the circulation of people in the country of 3.35mn will only exacerbate the crisis on a long-term perspective and that high vaccination rates are the key to keeping the number of coronavirus deaths down.

Just as Singapore did, Mongolian Prime Minister Oyun-Erdene Luvsannamsrai proclaimed at the beginning of June that there would be no more lockdowns. He cited how more than a third of the population had been vaccinated. From September, he informed the country, he would not forbid any event or business activities. The nation, he said, needed to start living with the virus.

The medical community was quick to attack the PM’s announcement, claiming that it was motivated by political pressures ahead of the presidential elections and showed little regard for the public. But the progress in battling the virus seems real, and from November 1, entertainment and cultural events were re-opened with restrictions. Venues must operate at 50% of their capacity and they are restricted to people who have received their booster vaccine dose or have tested negative for Covid.

During the early stages of the pandemic, when the virus initially appeared and spread in Wuhan, China, Mongolian specialists and officials predicted that the virus would quickly sweep the country.

As early as January 2020, Mongolia introduced mask and stay-at-home regulations, cancelling school and even national holiday celebrations such as lunar holiday events. The country embarked on a battle to achieve zero-covid and imposed punishing measures on Mongolians who wished to return home from abroad. They were required to pay for their travel fees and also suffer a 21-day quarantine in wretched quarters; that was despite a World Health Organization (WHO) recommendation that a quarantine should only last 14 days.
For the majority of the first year of covid, the country did indeed avoid it. International headlines talked of a success story as Mongolia boasted of having no internally transmitted infections; it even received praise from the WHO for having zero community transmissions, but the apparent victory over the virus proved to be the winning of a battle, rather than the war. 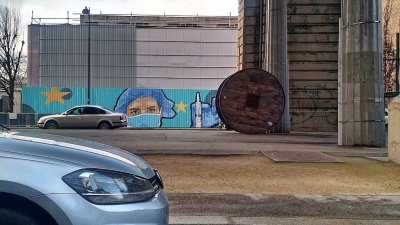 There was no recorded in-country transmission of the virus until November last year in Mongolia (Image: tongeron91 CC-BY-SA 2.0).

In November 2020, the country recorded its first ‘community covid’ case, and the nation went straight into lockdown—all businesses and schools were closed, forcing people not to leave their homes for weeks. The infection rate was significant, but by only permitting a small incremental easing of lockdown measures from January this year and onwards, the country was able to avoid a coronavirus explosion.

Around March, the majority of the country’s health personnel received a first dose of the AstraZeneca vaccine, provided by India. However, also around this time, the extent of the lockdown easing was widened and after just a few days, there was a distinct pick-up in the number of cases. The wearied country then went into its fourth and last lockdown in April. It was a month in which Mongolia for the first time experienced more than 1,000 newly recorded covid cases in a day. On September 7, the country posted its highest daily case count yet, with over 3,000 infections reported. But showing the improvement that appears to be setting in, the daily figure issued on November 19 was 595. Since November 14, the daily totals have ranged between 491 and 873.

Increased access to hospital beds for covid patients provided since October appears to have contributed to securing the low mortality rate. The provision of hospital beds to coronavirus-positive people has lately been running at around 27%. At 574 coronavirus deaths per million people, Mongolia ranks 116th lowest out of 224 countries, according to compiled data on worldometers. For cases per million people, the country, with a figure of 112,306, is in 34th position.

Those Mongolians, who during the onset of the pandemic enjoyed a brief period when they dreamt of escaping the virus altogether, have ended up enduring a gruelling struggle. Light is seen at the end of the tunnel, but episodes where officials appeared to allow all caution to be thrown to the wind make people nervous. For instance, in early September the National Communication and Information Technology Authority (CITA) held a tech exhibition in Ulaanbaatar where crowds were shoulder to shoulder. The exhibition was quickly dubbed "Delta Nation 21", in reference to the fast-spreading coronavirus Delta variant. Many people expressed their outrage. If Mongolia were to give up its gains now and surrender to another coronavirus wave, it would be a real pity.

CENTRAL ASIA BLOG: Why Tajikistan and Turkmenistan said no to a Central Asian ‘Visegrad Group’