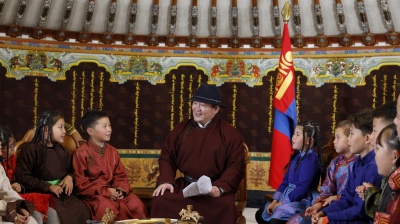 President Battulga Khaltmaa with pupils at the opening of a new school year.
By Anand Tumurtogoo in Ulaanbaatar May 1, 2021

A mighty political battle in Mongolia could produce any of several juddering outcomes, but it is an impeachment of the president that currently looks the most likely.

President Battulga Khaltmaa was dealt a big blow on April 16 when the constitutional court ruled that incumbents and former presidents cannot run for re-election. You might say that Battulga, a 58-year-old former wrestling champion and a member of the Democratic Party (DP), reacted by trying to slam his opponent, the ruling Mongolian People's Party (MPP), to the ground. Angered that the ruling derails his plan to run for re-election in June, Battulga dramatically read out a decree ordering the dissolution of the century-old party, accusing it of subverting the constitutional court, militarising the state and of using the armed forces to take an undemocratic grip on power.

Unfortunately for Battulga, his presidential authority does not actually extend to dissolving any political party. And, as The Economist remarked, “banning political parties is the stuff of tin-pot dictatorships”, not something expected of Mongolia, seen as notably democratic since its peaceful revolution in 1990 amid the demise of the Soviet Union.

There seems little substance to the idea that the army is being brought into Mongolian politics and exactly who is endangering Mongolia’s democracy has become an issue of fierce debate; if Battulga cannot turn things round, he appears in distinct danger of a charge of impeachment or, after leaving office, a prosecution for abuse of power or even corruption.

‘Trampling on the constitution’

As Uurtsaikh Dashdondog, a constitutional scholar, told gogo.mn: “It’s an abuse of power in trying to influence the supreme court’s independence. His actions are grounds for his impeachment. For a president who tramples on the constitution should face legal ramifications.”

The president’s predicament can be traced back to the MPP-dominated State Ikh Khural’s (parliament’s) May 2020 decision to ratify constitutional amendments made in 2019 as it sought to strengthen Mongolia’s parliamentary rule. The amendments stripped away many of the presidential powers such as the president’s power to suspend judges and also limited the presidency to a single term for six years. Crucially, the amendments were only supposed to take effect in 2025, but the parliament, in which the MPP has a super-majority, decided that they would apply immediately and retroactively.

Political experts and analysts have pointed out that if Battulga had contested the decision when the constitutional amendments were about to be ratified, he would not be in such a bind.

Perhaps leaving things until too late in the day, Battulga has since February been meeting with members of the constitutional court—despite protests from legal scholars that a president directly speaking with the courts is a violation of democratic procedure—in an attempt at securing a favourable ruling that would allow him to contest the upcoming election. But those efforts likely foundered with the mid-April ruling.

Battulga’s latest attempt to fight back saw him state: “The MPP is threatening the country's democratic foundations by creating a parallel military structure alongside its party. This endangers the fundamental rights and interests of our citizens and the constitution. The law explicitly states that any political party that takes any militarised form shall be disbanded”.

The president’s order for the dissolution of the MPP has reportedly been sent to the Supreme Court for deliberation.

Looking to sharpen his efforts to remain eligible for re-election, Battulga, through the DP, appears to have even attempted to deploy a public relations company based in Washington, DC. The DCI Group—which has connections to the US Republican Party and has worked for the Burmese military government—was apparently gearing up to promote Battulga’s party as the “vanguard of Mongolian democracy” ahead of the June 9 poll.

The DP, by some accounts, has a history of utilising foreign agents to win in political elections, and Munkh-Orgil Tsend, an MPP lawmaker, responded to the hiring of DCI by saying: “Since the horrific riot of July 1, 2008 [sparked by allegations of vote-rigging, a riot left five dead and the MPP headquarters burnt out after an arson attack] there has been an unwritten verbal agreement between the main political parties to cease receiving foreign support during an election. The agreement has now been broken two months before the presidential election campaign.”

That prompted DP leader and MP Tuvaan Tsevegdorj to respond: “The DP responsibly says that the DP has not paid $50,000, let alone $50, for such services. We are not such a rich party. The MP Munkh-Orgil must be mistaken. If he has made a mistake, he must please correct it.”

The US Department of Justice reported on April 23 that DCI terminated a $50,000, two-month contract with the DP “effective immediately”.

Splintered and in disarray

The DP is in fact splintered into two factions (both claim to be led by the rightful party leader), with only one supporting Battulga. It is, in short, a party in disarray. Having lost its parliamentary majority in the 2016 election, it suffered a dismal defeat in the 2020 election, with the MPP easily retaining power. It was the first time that a ruling Mongolian party had won two elections in a row.

All too clear is that the DPP is widely seen as having no clear sense of how to improve the country’s fortunes. Now, with Battulga unable to run for re-election, the party needs to find a way out of its shambles to achieve coherence and find a candidate who can stop the MPP taking the presidency.

Battulga won the presidency partly by coming across as a strong Mongolian male with a no-nonsense attitude, with many Mongolians still having an affinity for male figures who embody the warrior spirit of Genghis Khan, whom Battulga very much reveres.

There is, however, another politician in the running who flaunts his manliness to the public, namely, chairman of the MPP, and prime minister until January, Khurelsukh Ukhnaa. Khurelsukh resigned as PM following protests against government heavyhandedness in addressing the coronavirus crisis, but, conveniently for him, it meant he cleared the way for a run at the presidency. 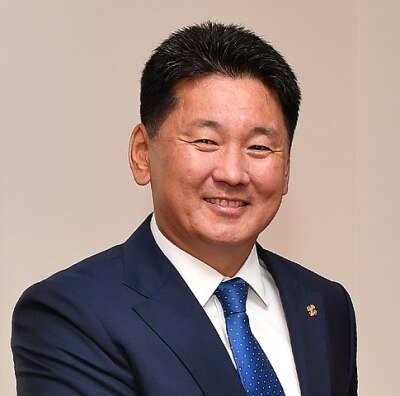 A former army man who’s fond of a military parade, 52-year-old Khurelsukh has not been slow to attack Battulga in sharpening his own chances in becoming his successor, should he confirm a run. “[Battulga] destroyed the DP, he just tried to destroy the People's Government, and in the future, he would destroy Mongolia itself,” asserted Khurelsukh.

Unless Battulga can grasp victory from the jaws of defeat—and the worry is that he would need to incite street unrest to have any chance of pulling that off—Khurelsukh looks very likely to claim his mantle.