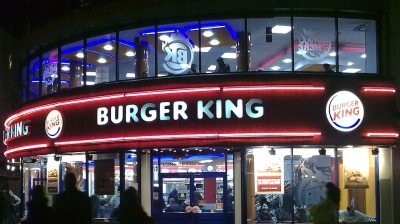 After 67 years of flipping burgers, Burger King is apparently set to arrive in Tashkent. / Chrisloader CC-BY-SA 3.0
By Muzaffar Ismailov in Tashkent July 31, 2021

Burger King has reportedly sized up Tashkent for a market entry expected to take place late this year or in 2022.

If the reports are correct and the hamburger heavyweight really does materialise in the Uzbek capital, it will be hoping for more than a flash-in-the-pan success. In the world of fast food, the story of the big-time fast food chain arriving in a frontier market and attracting hordes of excited consumers before quickly fading out of focus as locals return to their domestic (and cheaper) favourites is not uncommon.

But, if media site Spot has it right, Burger King Uzbekistan, running as a franchise belonging to a Moscow operation, has decided to take the plunge. “Burgerhouse LLC”, with an authorised capital of Uzbekistani som (UZS) 1bn ($94,000), is said to be recruiting employees.

Burger King appears to have long eyed a potential Uzbekistan arrival as since from many years back it has protected its intellectual property in the country, while this year it filed two more trademarks for registration.

Starbucks on the way

KFC, Wendy’s and Baskin Robbins are among the major Western fast food names already operating on the Uzbek market, while bne IntelliNews has previously reported on Starbucks’ plans to open a flagship outlet in Tashkent in 2022.

If the “Home of the Whopper” makes the Tashkent move, it will steal a march on McDonald’s. This publication reported as far back as September 2017 that McDonald’s Corporation, which like Burger King already has outlets in Kazakhstan, was looking into ways it could enter the Uzbek market both directly and “through franchising”. Nothing has come of it.

As part of thorough preparations, Burger King—founded in 1954 in Florida and headquartered in Miami-Dade—would do well to look into the Uzbekistan experience of KFC, which in 2018 opened as Tashkent’s first global fast-food chain.

Despite the fears of Tashkent residents, KFC’s prices have turned out to be affordable. Its burgers, as in other fast food outlets in the city, cost up to $3. A large basket of chicken wings costs $12.34. The prices are the same as in Kazakhstan and Russia.

For comparison, a lavash in a Tashkent EVOS cafe costs around $2, while a classic burger in Loook costs roughly the same. A portion of French fries in Loook costs 90 cents against 120 cents at KFC. Spicy chicken wings cost 47 cents per piece against KFC’s 64 cents.

EVOS is known for its pita bread, and it’s unlikely KFC’s twisters will ever compete with it.

Among other local or regional stalwarts making a go of the Uzbek hamburger scene are Black Start Burger (Russia), Chef Burger and BBQ Burger.

Those who can fork out a bit more may visit Gosht. A classic burger at this restaurant costs $5.

Uzbekistan, we should also not forget to mention, has some history of fake Burger Kings.

Many an Uzbek, of course, will quickly tell you that the national cuisine is not at all inferior to American-style fast food, flame-grilled or not. Thousands of Milliy Taomlar restaurants with affordable prices and flexible service have appeared throughout the republic in recent years.

Also important is that fast food is mostly only popular among the youth. The older generation is wont to stick with the national dish, pilaf ($2.50 in Tashkent), served with achichuk (tomato and onion) salad, and washed down with strong tea.

Me? I’m game for a visit to a BK. I’ve been doing my deep-dive research. It says here that “a Burger King crown is something you should NEVER wear on a plane”. Say what? One to grill the Burger King execs on at the opening day press conference. 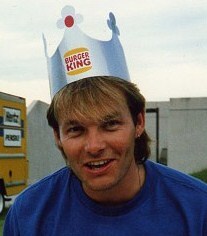