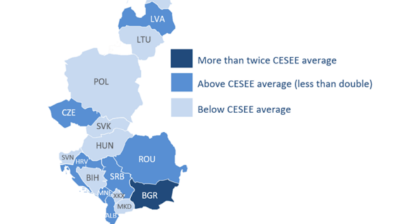 Banks in Central and Southeastern Europe (CESEE) have weathered the financial hit of the COVID-19 pandemic so far but they may be tested by the withdrawal of government help to companies, particularly as infection rates begin to soar again, according to the Vienna Initiative of banks active in the region.

Its NPL monitor for the 17 countries in the CESEE region says the average non-performing loans ratio for the region stood at 3.2% of total loans as of 30 June, compared to 2.3% for the European Union/European Economic Area.

This marks a further improvement, though at a slower pace than in the previous period.  At the end of last year the average NPL ratio was 3.6%, which put it only slightly above the EU average of 2.9%.

“The COVID-19 crisis has not yet fully materialised into a significant worsening of banks’ asset quality as initially feared”, the biannual report said.

However, it warned that many economies “remain fragile and significant disparities in performance can be observed”. It also pointed out that the next few months will be critical.

“The full impact of pandemic effects on private sector resilience and the quality of firm balance sheets might yet emerge into full view in the period to come, with direct impact on lending activity and the need for resolute forward-looking action,” said Boris Vujčić, Governor of the National Bank of Croatia (HNB), in remarks to the Full Forum meeting of the Vienna Initiative in October 2021.

The decline in NPL stocks was most significant in Hungary, North Macedonia and Estonia, where they fell 28%, 23% and 22% respectively during the period. The largest contributor to the decline in absolute terms was Poland, where the stock of NPLs declined by almost €2bn, or 14.6%.

The declining trend of NPLs was “in large parts due to the success of measures implemented to support borrowers, banks, and the economies, such as payment moratoria and public guarantee schemes”, the report says.

However, most measures have now expired or about to end in the coming months. The effect of the crisis might therefore still be felt, the Vienna Initiative warns. In addition, the recent surge of infection rates has again made the introduction of drastic restrictions to protect public health a possibility.

“The industries most impacted by the short-term liquidity shocks of the crisis, such as food, accommodation and entertainment, may see issues arising in 2022 as the benefits of support measures begin to wane,” the report says. “These sectors will remain vulnerable to any further shocks caused by the pandemic, which could jeopardise the viability of already weakened businesses.”

It also points out that regulators are also closely monitoring other sectors, such as commercial real estate and high street retail, which are at risk of accelerated structural change due to the pandemic. For now, real estate collateral is holding firm, with some regions seeing a continued rise in property values. There are, however, fears of value readjustments to come.