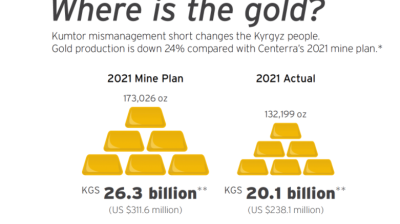 Canada’s Centerra Gold has said that the flagship Kumtor gold mine—seized from the company by the Kyrgyz government in May—underperformed the 2021 mine plan for June through September by 24%, Mining.com reported.

According to a Centerra statement sent to the media outlet, Kyrgyz authorities and the state-imposed “external management” continue to claim the mine is operating normally, but a very different story is seen based on production numbers.

“In particular, gold output plunged more than 24% below Centerra’s approved 2021 mine plan over the period between June and September,” Centerra said in the statement. “That means the external management poured about KGS 6.2 billion ($73.5 million) less gold, based on the average gold price for the period.”

Toronto-based Centerra also took issue with the current management’s refusal to publish any output data or other indicators of Kumtor’s performance since the last public update in late June.

“When Centerra was in control of the mine, the Kumtor Gold Company (KGC) released timely, accurate and detailed information about its operations – including how much gold was produced and sold. Despite calls for transparency from members of parliament, the 'external management' has refused to publish any production data or other indicators of the mine’s output,” Centerra said.

Centerra said it wants to know where Kumtor’s missing gold is; why KGC has failed to publish any operating results since the expropriation of the mine; how the state intends to make up for falling gold output; who is purchasing the gold and where the proceeds are; how much the current mine manager Tengiz Bolturuk is being paid and why the state is not allowing an independent assessment of the mine’s condition.

“Kumtor plays a critical part in the Kyrgyz economy, and we again urge the government to allow Kyrgyz and international journalists to visit the mine and get answers to these and other questions,” Centerra said.

KGC, as a subsidiary of Centerra, filed for bankruptcy in June after the central Asian country brought in a law to enhance state power, enabling the government to grab control of the mine.

Kyrgyzstan is challenging Kumtor’s right to Chapter 11 bankruptcy protection in the US.

In late August, Centerra said it had obtained photographic evidence showing at least 40 metres of water at the bottom of the Kumtor gold mine  and “abnormally” large amounts running down the pit walls. It claimed the situation could lead to catastrophic events.

Kyrgyzstan’s Japarov administration, which came to power following political upheaval in the country seen late last year, is facing international arbitration hearings pursued by Centerra over ownership of the mine, the second highest gold mining operation in the world and the largest taxpayer in the country. The authorities resurrected several previously settled alleged tax and environmental complaints in relation to the gold mine prior to the seizure.

The tactics deployed by nationalist strongman President Sadyr Japarov to wrestle the mine from Centerra’s hands have been especially aggressive and have shocked foreign investors. So much so that the British government, recognising that UK-based BlackRock Investment Management holds a 10.6% stake in Centerra, in late May lined up with the Canadians in warning Kyrgyzstan that measures that “negatively impact trade and foreign direct investment will further undermine already fragile economic livelihoods of the Kyrgyz people”.

The International Monetary Fund (IMF) in June called for a “speedy and transparent” resolution to the dispute between Kyrgyzstan and Centerra over the mine.

Perspectives | Does a Russian bank merit a sanctions waiver for Central Asia?

Russia has launched NashStore, its answer to Google Play. The platform was designed with the help of 700 Russian companies, and is intended to help circumvent sanctions. But it only offers a thousand apps at present, and has to be downloaded online.

Ukraine’s advance in the north-east is an impressive turnaround after Russian troops had attempted a siege on Kharkiv for two months.