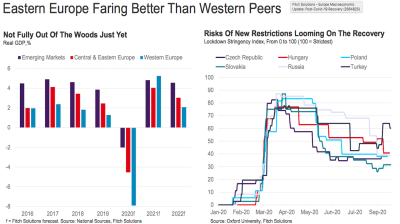 The Central and Eastern European (CEE) economies have made a relatively swift recovery from the first wave of coronavirus (COVID-19), performing better than their Western peers. However, said Tiziana Papa, head of country risk Europe at Fitch Solutions, in a webinar on September 30, the risk of a second wave “threatens to stifle recovery in domestic and external demand, and to add new volatility to region that is already marred by elevated political tensions.”

“Hard data so far suggest the COVID-19 pandemic exacted a significant toll on the region, but a relatively swift recovery is already underway,” said Papa.

Fitch’s forecast is for growth in the region to contract by 4.5% in 2020 and then to rebound by 4% in 2021. Across the region, Slovakia is expected to be hardest hit, while Poland is anticipated to be the outperformer.

In 2020-22, the region is set to underperform its emerging market peers, especially Asian emerging markets, but outperform its Western peers except in 2021, but this due to the base effect of a bigger expected contraction in Western Europe in 2020.

However, Papa said, “the threat of the pandemic maintains the risk to outlook focused to the downside”.

Fitch’s forecasts assume a vaccine will be available by mid-2021, but most emerging markets are not well positioned to have early access.

“The region managed to contain the first wave relatively [successfully], but many countries are now experiencing much higher rates of contagion, and several governments are reintroducing restrictions,” said Papa.

There are already strong signs of a second wave descending on Central Europe. In the last two weeks there have been 26,811 new coronavirus cases in Czechia, according to the September 30 update from the European Centre for Disease Prevention and Control (ECDC), and a further 18,403 in Romania, 14,228 in Poland, 11,291 in Hungary and 3,714 in Slovakia.

In response, both Czechia and Slovakia have declared a state of emergency from the beginning of this month, and Poland has also tightened restrictions.

Fitch expects the recovery to temper going forward as tighter restrictions weigh on customer confidence. New rounds of significant fiscal stimuli are not expected, and on top of this many measures introduced at the start of the pandemic will expire around year-end, which will have negative implications especially on the labour market.

Despite the growing number of new cases, Central European countries are not expected to impose new nationwide lockdowns. There are a variety of reasons for this: economically, the first wave of restrictions pushed countries into historic recessions so they no longer have the fiscal space for further support as well as facing growing debt burdens; politically lockdowns tend to further erode support for many governments; and, socially, second lockdowns may cause further labour market losses and frustration over relatively poor quality of life, an issue highlighted by the major protests in Serbia this summer.