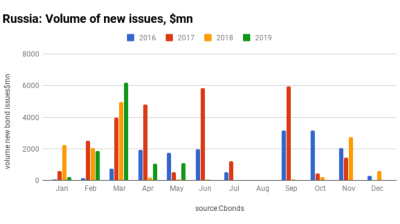 Bond issues in Central and Eastern Europe (CEE) in May were down steeply on previous years to a total of $3.1bn from six issues, but they were up steeply in Russia and the CIS to $1.1bn from four issues, albeit from a low base.

Issues in CEE in May were lower than in all four of the previous year as the bond market goes into its slow summer season. However, over the first five months of 2019 Central European bond issues were still slightly ahead of last year with a total of $23.8bn of issues in January to May, compared with $22.3bn worth of issues in the same period a year ago.

As usual it was the Russian issues that dominated the CIS. The $1.1bn worth of issues in May were well ahead of last year’s mere $65mn issues and the total of $10.4bn of issues over the first five months of this year was also slightly ahead of the $9.5bn of issues in the same period a year earlier.

This year’s issues over the first five months in the whole patch were supported by the issues in March, which was a particularly strong month, but the issues now are already tapering off as the summer doldrums set in.

Amongst the biggest issues in Russia were a €500mn bond from the state owned Russia Railways with a 2.2% coupon and a $500mn issue from leading steel mill NLMK with a 4.7% coupon.

Turkish lira deposit rates below official inflation
7 hours ago
Hungarian forint slips to all-time low against the euro
4 days ago
Russia’s industrial output grew 2.1% on the year in 2019 and 8.9% on the month in December
4 days ago
Polish retail sales accelerate growth in December
5 days ago
Russia's Watcom shopping index ends 2019 on five-year high as consumption recovers
5 days ago