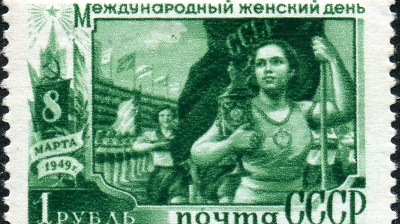 More than 100 years since International Women’s Day was declared a national holiday in post-revolutionary Russia, the day is still widely celebrated across the successor countries to the Soviet Union and in Central and Southeast Europe.

Yet as a new survey from the United Nations Development Programme (UNDP) reveals, gender bias is still widespread across the region, in line with the global findings of the research.

Across the 75 countries accounting for over 80% of the world’s population studied for the report "Tackling social norms: A game changer for gender inequalities", UNDP researchers found that 91% of men and 86% of women show at least one clear bias against gender equality in areas such as politics, economic, education, intimate partner violence and women’s reproductive rights.

In the 18 countries from Central, Eastern and Southeast Europe and Eurasia included in the Gender Social Norms Index, 86% of respondents had one gender bias, and 64% held more than one. 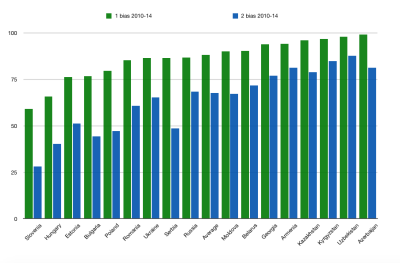 Respondents to the UNDP study who revealed at least one gender bias. Source: UNDP

Across the region, the lowest number of respondents with at least one gender bias was in Slovenia (59%), followed somewhat surprisingly by Hungary — one of the leading “illiberal democracies” in the region (66%) — and Estonia (76%).

Among the statements respondents were asked to evaluate were “Men make better political leaders than women do”, “University is more important for a man than for a woman”, “Men should have more right to a job than women” and proxy questions for intimate partner violence and reproductive rights.

Worldwide, about 50% of men and women interviewed across 75 countries said they think men make better political leaders than women, while more than 40% felt that men made better business executives. Almost 30% of people agreed it is justifiable for a man to beat his partner.

There was a clear divide between the countries of Central, Eastern and Southeast Europe on the one hand, and those of Central Asia and the Caucasus on the other. Gender bias was strongest in Azerbaijan, where over 99% of respondents held at least one bias, and over 96% in Kazakhstan, Kyrgyzstan and Uzbekistan.

When looking at the types of bias held in the region, in eight of the 18 countries the strongest bias was political. 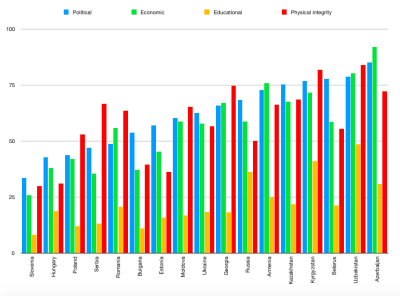 The strongest bias revealed by respondents to the UNDP survey in the CEE/CIS region was political. Source: UNDP

The other area where high levels of gender bias were found was in physical integrity, where the highest level of bias was found in seven of the countries from the region.

Another finding from the UNDP was that there are signs of backsliding on gender bias recently. The index shows that the proportion of people with moderate and intense biases against gender equality grew over the last few years in 15 countries out of 31.

Time comparison data was only provided for a few of the CEE/CIS countries, but among them, there the proportion of people with at least one gender bias has risen in Georgia, Romania and Russia, while falling in Poland, Slovenia and Ukraine. 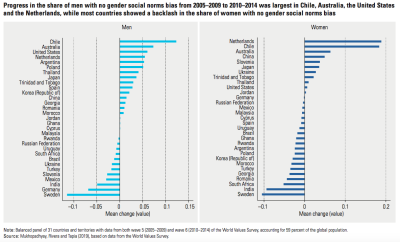 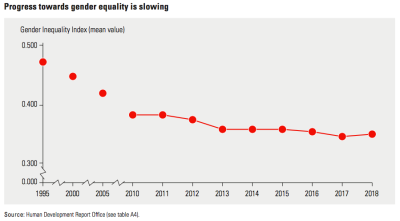 In addition, while gender equality is growing at lower levels for example of education, workforce participation and political activity, at the higher level there has been far less progress.

For example, women and men vote in elections at similar rates, but when it comes to national parliaments women “appear severely underrepresented” and for heads of state and government the gender gap is almost 90%.

Similarly, economic participation also shows a gradient, with women overrepresented at basic levels of employment, while this is reversed at higher positions. Women represent only 21% of the world’s employers and 12% of the top billionaires.

“The Human Development Report’s Gender Inequality Index (GII) — a measure of women’s empowerment in health, education and economic status — shows that overall progress in gender inequality has been slowing in recent years …  based on current trends, it would take 257 years to close the gender gap in economic opportunity,” according to the UNDP.

And this has huge economic implications. A 2018 World Bank study puts the potential losses in wealth resulting from gender inequality globally at $160.2 trillion — the figure is based on a calculation by World Bank economists that women’s human capital could increase from $283.6 trillion to $453.2 trillion with gender equality.