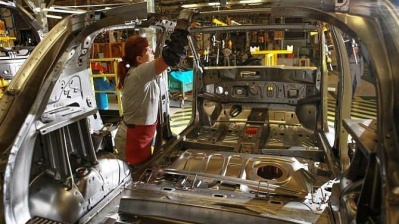 The four leading Central European countries are outperforming their EU peers in growth, but they remain vulnerable thanks to their heavy dependence on the automotive sector
By bne IntelliNews October 10, 2020

After two and half decades as members of the EU, the leading four Central European countries of Czechia, Hungary, Poland and Romania are pulling ahead of their peers.

With the key institutions set up and key reforms under their belt, the CEE4 are now capitalising on what catch-up growth is left to do and benefiting from young and lean economies.

The four countries have been booming in recent years and have gone into the coronacrisis with more economic momentum than the other countries of Europe, as well as solid finances.

“It appears that the CEE-4 have increasingly decoupled from the euro area’s performance, with robust growth driven by strong private consumption due to high real wage growth (a reflection of tight labour markets), as well as robust capital spending supported by large withdrawals from EU structural funds,” the Institute of International Finance (IIF) said in a note.

When the coronavirus (COVID-19) pandemic began it was feared that the resulting slowdown in Europe would pull these economies back. The EU is expecting a historically large output contraction in 2020. But those fears are proving to be unfounded.

That's not to say the CEE-4 have escaped unscathed. Economic activity declined by 0.8% in Q1 and 10.3% in Q2 quarter on quarter (seasonally adjusted), according to IIF.

“Despite high-frequency data so far indicating a strong rebound in the second half of this year – under the assumption that currently surging COVID-19 cases across the region will not cause a prolonged disruption to economic activity – we project that output will not return to its pre-crisis level until 4Q21,” IIF said. “Private consumption and gross fixed capital formation, which have become major drivers of CEE-4’s strong GDP growth in recent years, will likely continue to contribute to the output recovery into 2021, which should be also supported by a rebound in exports.”

Strong private consumption has been one of the main drivers of growth amongst the four and helping them weather the external shocks to the economy as the general European economy slows.

Over 2017-19 the growth contribution from private consumption reached 2.8pp, and from investment 1.6pp, on average, IIF reports.

“We expect these dynamics to persist in the post-crisis period beyond 2021, as (1) demographic factors will continue to lead to tight labour markets, which will likely keep real wage growth in the CEE-4 higher than the Euro area, and (2) CEE countries will have access to sizable sums from the €1.1 trillion seven-year Multiannual Financial Framework (MFF) as well as a newly created COVID-19 recovery fund of €750bn. With drivers of growth in CEE-4 shifting from exports toward domestic spending, Germany’s export and growth performance has become less relevant for the CEE-4 economies,” says IIF.

Even if the rest of Europe in general, and Germany in particular, has become less important to the well-being of the CEE4, as all of them have big manufacturing sectors, and especially automotive, their economies remain tied to the wider neighbourhood and exports is a contagion channel through which other countries’ woes can affect their economies.

The four have been trying to diversify their economies away from the automotive sector without much success, as capital investment into the sector by the car companies has continued to build up their importance and has even shifted some of the production share from Germany to Central Europe.

“As the CEE-4 have been unable to diversify their manufacturing sectors away from heavy reliance on auto production, challenges loom going forward in light of the structural changes the industry is likely to experience,” says IIF.

Changes in the automotive industry are expected to take some of the wind out of their sales. For example, the shift to electric cars means few workers will be needed, as electric cars have much fewer parts. At the same time, the carmakers moved to Central Europe because of the lower wages, but the labour market and booming economy are pushing those wages up and so undermining one of the region’s key attractions. As bne IntelliNews has reported, at some point production will move on to Southeast Europe where the wages are lower, but experts don't expect this to happen for several years yet.

“Over the near term, however, the relative complexity of hybrids will continue to support such companies’ prospects. The Czech Republic appears to be the most vulnerable country in the region; others are not too far behind,” IIF said.

Ukraine got off to a very good start this year and by summer had grasped the nettle of most of its major problems. But in the autumn it all fell to pieces. With $14.5bn of debt redemptions in 2021 it is not clear how it will cope.

Turkmenistan: The dammed united
1 day ago
Israel out to provoke war in dying days of Trump says Khamenei’s adviser after assassination of Iran’s nuclear mastermind
1 day ago
Ukraine debt: muddling through for a bit longer but 2021 will be tough
3 days ago
Moldova’s presidential election is over, now the battle for the parliament begins
5 days ago
COMMENT: Romania’s foreign debt, reserves and gold during the pandemic
5 days ago