Capital outflows from EMs reverse in April to modest gains 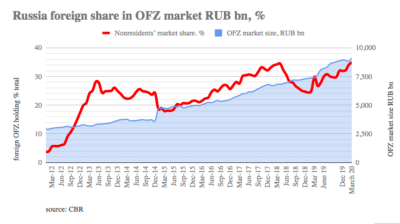 Capital outflows from EMs reverse in April to modest gains
By bne IntelliNews May 5, 2020

The torrent of capital fleeing Emerging Markets (EMs) securities has stopped and these markets saw a modest inflow in April, reported the Institute of International Finance (IIF) on May 4.

March saw the largest ever outflow of capital from EMs at $83.2bn in the month, IIF reported at the time as investors fled risky markets in the face of a global stop-shock caused by the coronavirus (COVID-19) pandemic that was coupled with the total collapse of oil prices that fell below zero for the first time in history.

Now the markets have seen something of a “dead cat bounce”, attracting a modest $17.1bn in April, according to IIF, which tracks capital flows.

“The recovery is mainly supported by debt flows and China equity flows,” Jonathan Fortun, who tracks capital flows at IIF, said in a note. “While the impact of COVID-19 was first noticeable in January and contained to China, a wider spread of the pandemic during March rattled markets, creating a shock to EM. During April, the cascading nature of the pandemic left some EM markets depressed, while others stabilised.” 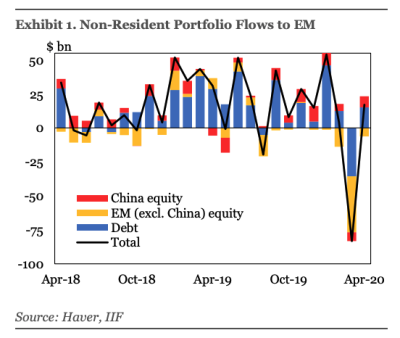 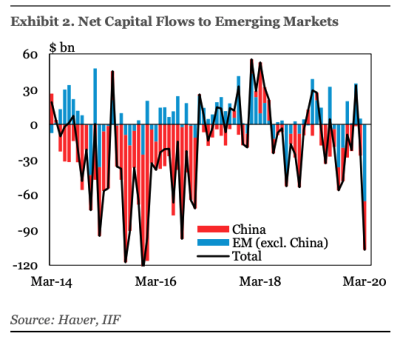 Fortun says there has been a clear distinction between equity and debt, with most of the capital leaving in March being equity, although debt outflows were significant as well.

Typically following a major crisis, returning capital tends to flow into debt first and equity only after the economy has stabilised and start to visibly recover, months or even years later.

“Debt inflows picked up in April, reaching $15.1bn,” IIF reports. “On the equity side, the negative trend, which we observed last month, continued. Outflows from EM x/ China equities amounted to $6.3bn, while flows to China equities partially recovered, posting a net inflow of $8.2bn, highlighting the divergence between China and the rest of the EM complex.”

Regionally, the increase in debt flows was distributed between EM Asia — experiencing an inflow of $7.3bn — followed by $3.0bn in Latin America.

The capital flows are loosely correlated to the stage of the epidemic in each region. China has more or less emerged from its epidemic, with infection rates falling and the number of recovered patients increasing towards the total infected.

Russia, on the other hand, is still pre-peak and the infection rate in the last few days has accelerated to 10,000 per day, with almost to 150,000 infected. The Kremlin is currently building spare hospital bed capacity to ensure the system is not overwhelmed, but things will clearly get worse before they get better.

The Russian dollar-denominated Russia Trading System (RTS) index is down 26.4% YTD as of April 30 and the MOEX Russia ruble denominated index down 13%. But that represents an improvement from RTS’ losses of just under 50% in the week ending March 20.

Equity prices have stabilised now, and even recovered a little, since the middle of March, but analysts are not optimistic that portfolio investors will return anytime soon. The Kremlin has been extremely cautious about spending the circa $150bn from the National Welfare Fund (NWF) to boost the economy, which for the moment will be used to fill any deficit in the budget spending. That probably means Russia’s economic recovery will be long and slow.

Bond markets have also seen outflows from the Russian Ministry of Finance ruble-denominated OFZ treasury bills, but those have been relatively modest. Foreigners share of the OFZ market has fallen from 34.9% in March to 31% as of the end of April, but the total volume of bonds foreigners hold in ruble terms remains ahead of the figure at the start of this year.

With over $565bn in hard currency reserves and zero public or external debt, Russia’s treasury bills remain a very attractive asset for bond traders, especially as central banks around the world start to cut rates. Still, the long-term consequences of the current crisis are not yet apparent.

“Despite improving flows, we believe that not all EMs are in the clear yet, as the combination of lingering uncertainty around COVID-19 and limited policy space is a challenge for some,” said Fortun.