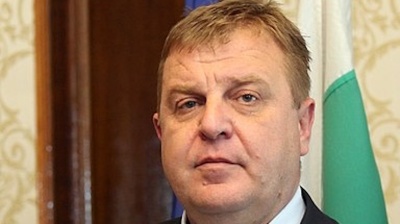 North Macedonia’s government has condemned a threat by Bulgaria’s nationalist defence minister to send his troops to dismantle the antifascist monuments in the country with inscriptions “Bulgarian fascist occupiers”, as shameful and offensive.

However, the government in Skopje — which needs Bulgaria’s approval to move forward with its EU accession negotiations — has been relatively restrained in its reaction and will not send a protest note to the Bulgarian authorities concerning this provocation, according to the government's spokesperson Dusko Arsovski.

Bulgarian Defence Minister Krasimir Karakachanov, a one time informer for the Communist era-state security services who comes from the ranks of the nationalist VMRO-Bulgarian National Movement (VMRO-BNM) party, said in an interview with Bulgaria’s Darik radio he will send an engineer platoon to dismantle WWII memorials in the neighbouring country erected to victims of "Bulgarian fascist occupiers" saying that these monuments are result of “falsified history”.

Karakachanov and other Sofia officials deny that Bulgaria was part of the Nazi axis and say that Bulgarian troops entered Macedonian territories that were part of the Kingdom of Yugoslavia during World War II as liberators, not as fascist occupiers.

Regarding the threat, North Macedonia’s Defence Minister Radmila Sekerinska said on October 21 that the statement from Karakachanov as minister of defence of a Nato member country was “not appropriate”, adding that the time had passed when such provocations in the region were considered serious.

“This is not the way of communication of two Nato member states,” Sekerinska said.

The Bulgarian minister’s statement, which is the culmination of a series of harsh comments and threats from Sofia, came just weeks before the meeting of the prime ministers of North Macedonia and Bulgaria, Zoran Zaev and Boyko Borissov, in November, after which it will be clearer whether Sofia will prevent the start of EU negotiations with Skopje at the end of the year.

According to Politico.eu, which cited diplomats after the EU ambassadors’ meeting on negotiations frameworks on October 21, Bulgaria will veto the start of EU accession talks with North Macedonia unless its concerns about the Macedonian language and history are taken into account.

The negotiating framework should be adopted during the ministerial meeting of the General Affairs Council on November 10, but Sofia could prevent such plans.

North Macedonia and Bulgaria signed a Friendship Treaty in 2017, but after the country became a Nato member and was invited to launch EU accession talks Sofia set a series of controversial demands that undermine Macedonian identity and are far from acceptable for Skopje.

Germany, which holds the EU presidency until the end of 2020, insists the two countries must bridge the differences to open the way for Skopje to launch EU accession talks. Not doing so would be regarded as a failure of the German presidency.

Diplomats say that Sofia is isolated in its position regarding North Macedonia, but has a right to veto the process.

Zaev and North Macedonia’s Deputy Prime Minister for European Affairs Nikola Dimitrov said that the country has its own red lines that cannot be crossed, namely the Macedonian language and identity, even it means that the intergovernmental conference with the EU will not start in December.