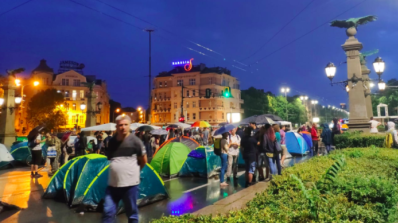 The organisers of Bulgaria’s nightly anti-government protests, the self-styled “Poisonous Trio”, have called a halt to the protests as the number of coronavirus (COVID-19) cases rises steadily in the country.

Bulgaria has been wracked by nightly protests since July, with hundreds of thousands of people demanding the resignations of Prime Minister Boyko Borissov’s government and chief prosecutor Ivan Geshev.

The message from the Poisonous Trio, posted on Facebook on the 116th day of protests, also the Day of the Enlighteners holiday in Bulgaria, says the protests have “achieved the unthinkable, beyond our wildest dreams”.

From now on, however, the trio – comprising PR expert Arman Babikyan, human rights lawyer Nikolai Hadzhigenov and sculptor Velislav Minekov – call for the protests to be halted and replaced with “other forms of resistance” amid the mounting second wave of the pandemic.

“We must preserve the ability of Bulgarian physicians and nurses to deal with the wave of sick. We take this move out of respect for our rescuers in white aprons … We think it's hypocritical to criticise the ruined healthcare system and at the same time create a risk of infection,” the statement said on November 1.

“The battle will be with other methods of resistance and we will pressure the system of the goons to the end. Our demands remain the same – resignation of Boyko Borissov, resignation of Ivan Geshev and early parliamentary elections!” it concluded.

The protests were triggered by two incidents back in July that highlighted the corruption in the country’s political system. First, the confrontation between opposition politician and former justice minister Hristo Ivanov and state security guards protecting the summer villa of Ahmed Dogan, the chairman of honour of the opposition Movement of Rights and Freedoms (DPS). For many Bulgarians, Dogan and the DPS are synonymous with corruption. Shortly afterwards, Geshev ordered a raid on the presidency after President Rumen Radev called for an investigation into why state security had been deployed to protect Dogan’s villa.

The two incidents led to a much broader outpouring of frustration about official corruption in Bulgaria, ranked the lowest of the EU members on Transparency International’s Corruption Perceptions Index.

Despite some official efforts to persuade the protesters to stop – for example by ministerial resignations and promises of a new constitution – the situation between government and demonstrators has reached a stalemate.

Still, the Poisonous Trio’s statement claimed progress in awakening people to the situation in Bulgaria and abroad.

“Bulgaria will never be the same ugly hole in which people's dreams, justice, labour and money sink. The only ones we could not wake up are Borissov, Geshev and the close clique around them.”

Bulgaria, like other countries in Central and Southeast Europe, is experiencing a resurgence of the virus. 1,225 new cases were reported on November 2, bringing the total to date to 54,069. Nearly two-thirds of Bulgaria is now in the coronavirus (COVID-19) “red zone” due to the high number of new cases, and there is no area where the spread of the disease has remained low.