Bulgaria has worst air pollution in the EU, Eurostat says 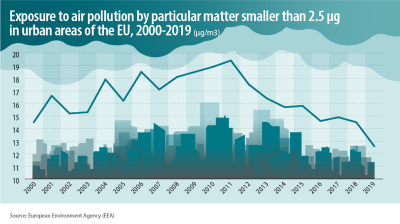 Bulgaria has the worst air pollution in the EU with the highest annual mean concentration of fine particles (PM2.5), according to a survey released by Eurostat.

The country has been struggling for years with the air pollution in urban areas, particularly during winters. In the capital Sofia, where the situation is the worst, a group of citizens are trying to file a lawsuit against the authorities due to the high level of air pollution and the lack of measures taken for years. 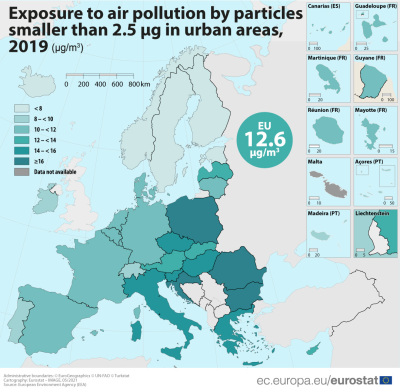 Fine particles (PM10, up to ten micrometres in diameter) can penetrate deep into the lungs and inflame or aggravate heart and respiratory diseases. Even finer particles with a diameter of 2.5 micrometres (PM2.5) can cause even more severe health problems as they penetrate even deeper into the lungs.

In Bulgaria, more than half of the capital Sofia’s air quality monitoring stations have recorded levels of MP10 35 times higher than the allowed in 2020, which has triggered the lawsuit.

The authorities have been accused for years of not taking serious measures. After a previous trial, won by citizens, Sofia’s mayor Yordanka Fandakova said the streets of Sofia will be washed more often as the only measure for lowering the pollution.

The latest legal claim says that the authorities’ failure to adequately address the high level of air pollution violates their right to breathe clean air.

“The residents of Sofia have been living with dirty air for more than 10 years and have been waiting for a bold plan that finally addresses this health crisis and reduces the thousands of premature deaths linked to polluted air,” Euronews quoted Ivaylo Hlebarov from Za Zemiata environmentalist NGO as saying.

Eco activists have repeatedly said the city needs a more serious plan for lowering pollution, including improvement of the city public transport and more bike lanes to encourage people not to use their cars. Sofia has a higher proportion of residents using cars than in many other major European city.

Russia’s PPI inflation up 1.5% to 28.6% in August
27 minutes ago
Montenegro’s economy posts strong 19% y/y growth in 2Q21, higher than EU average
1 day ago
Russia’s Duma elections statistics: the comet effect and the Moscow blob
3 days ago
Romania and Latvia's car ownership rates among lowest in Europe
3 days ago
Bank lending in Romania gradually returns to retail-driven pre-crisis pattern
3 days ago