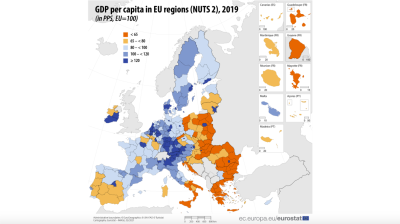 GDP per capita in Bulgaria, expressed in terms of national purchasing power standards (PPS), was the lowest in the EU in 2019, according to GDP and employment data published by Eurostat.

In the North-West region of Bulgaria, the GDP per capita was the lowest, at just 32% of the EU average. Bulgaria’s other non-capital regions occupy the remaining lowest places.

Slovakia's death toll increased by 65% compared to the average level between 2016 and 2019, while Czechia posted a 40% growth in excess mortality amid severe wave of the coronavirus pandemic.

Czechia and Slovakia recorded the highest excess mortality rates in the EU in February
17 hours ago
Polish PPI expansion picks up to 3.9% y/y in March
22 hours ago
Moldova’s currency falls amid weak exports, no grants
1 day ago
Romania’s Chimcomplex shares soar by 29% on WSE listing news
2 days ago
Montenegro’s public debt spikes at 82.48% of GDP in 2020
2 days ago