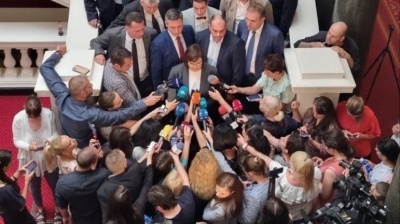 Bulgaria seems to be heading towards a new early general election after the Bulgarian Socialist Party (BSP) pulled out of coalition talks with Prime Minister Kiril Petkov's Change Continues after his decision to expel 70 Russian diplomats.

The pro-Russian BSP has been holding back the reformist efforts of the ruling coalition, blocking direct military aid to Ukraine and steps that would move Bulgaria away from Russian influence. However, until now the party had been willing to stay in the ruling coalition despite these differences.

Petkov announced on June 28 that 70 Russian diplomats are being expelled, trigerring mixed reactions in the country, ranging from condemnations by BSP’s leader Kornelia Ninova to strong support from Change Continues’ other coalition partner, the reformist Democratic Bulgaria.

There is speculation that the decision to expel the Russian diplomats was taken at this moment as Change Continues wants to end its relations with the pro-Russian BSP and provoke an early election, hoping to gain a majority in parliament along with Democratic Bulgaria for a stable new mandate.

“The decision to expel 70 diplomats from Russia is unprecedented in Bulgarian diplomatic history. This is on the brink of ending diplomatic relations. For us this is absolutely unacceptable both in the way of taking [the decision] and due to the content of that decision,” Ninova said at a press conference on June 30.

She added that the party could resume coalition talks if Change Continues nominates someone other than Petkov for prime minister.

Without the support of the BSP, Change Continues and Democratic Bulgaria have no chance of forming a ruling coalition, even if their former coalition partner There Are Such People (ITN) returns.

ITN pulled out of the coalition earlier in June, and contributed to the government losing a no-confidence vote. On June 30, ITN said it was willing to hold talks for coalition with Change Continues, but Petkov has already rejected that option.

BSP claims the decision to expel the Russian diplomats was taken by Petkov without being discussed within the government or with the coalition partners.

However, government spokeswoman Lena Borislavova said as quoted by Dnevnik news outlet that the decision was taken according the procedures of the foreign affairs ministry.

“This is not a decision of the government or the prime minister. The procedure has been completely followed by the Ministry of Foreign Affairs,” Borislavova said.

The BSP insists that the national security council should hold a meeting on the decision to expel the Russian diplomats and that parliament should hold a closed session to hear the information of special services on the reasons why these diplomats were expelled.