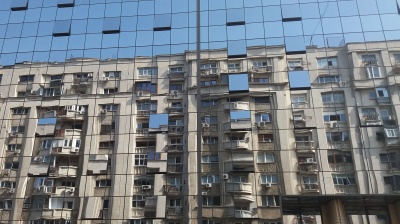 International real estate firm CBRE takes a cautiously optimistic view for 2021 in its latest report on the Romanian property market.

“With the real estate market slowly adjusting after the COVID-19 impact and trying to identify the new directions to follow, forecasts for 2021 are cautiously positive as a major office deal was already sealed and a number of large transactions are at the negotiation table,” said the firm’s Market Outlook Romania.

According to CBRE, the total investment volume in Romania dropped to €588.5mn in 2020, down by around one half compared to 2019. 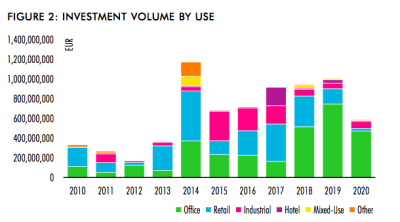 Moreover, many of the deals that closed during 2020 were a hangover from 2019; “Capitalising on the momentum gained in the previous year, 68% of the total investment volume was transacted during the first six months of 2020,” the report said.

The largest deal finalised in 2020 — AFI Europe’s purchase of three office buildings in Bucharest and one in Timisoara from NEPI Rockcastle for an estimated €308mn — had been negotiated in 2019.

The biggest transaction of 2020 was the takeover of the Floreasca Park office building in Bucharest by Chinese Fosun, a newcomer to the Romanian market, for a considerably smaller €101.5mn.

Office projects continued to be the most sought after properties in Romania, accounting for almost 80% of the yearly volume, said he report. However, it added, “Investors are also keen on acquiring industrial properties and also in this sector several transactions are in various stages. Finally, also the retail sector, especially certain subsegments which are deemed more defensive continue to attract interest and some transactions may materialise in this sector as well.”

“Prime yields remained stable for the office and industrial sectors, meaning 7.00% for office and 7.75% for industrial. The retail segment was the most affected during the year and saw 50bps of yield decompression ending the year at 7.00%,” said the report.

It does, however, remain to be seen what the long-term impact of the COVID-19 pandemic on the Romanian investment market will be, cautioned CBRE.

The pandemic brought to an abrupt end years of strong growth in Romania leading to a contraction of over 5% in 2020 that all only partially be recovered in 2021.

Commenting on the overall picture for the Romanian economy, CBRE wrote: “2021 is expected to be a year filled with hope, but much depends on the timely implementation of mass vaccinations. Economies are expected to reverse the negative impact of the pandemic, 2021 is set to be the much wanted jump-start of recovery.”

Geographically, the focus for office projects was firmly on the capital Bucharest in 2020. "Only 6% of the total investment volume was distributed towards regional cities, while Bucharest attracted the overwhelming majority,” according to the report. “Investors seemed to be more focused on the capital city in 2020 as demand became strongly polarised. If in 2019, the regional cities managed to attract 35% of the invested capital, in 2020 investors tried to remain on the safe side and focused mainly on the capital city." 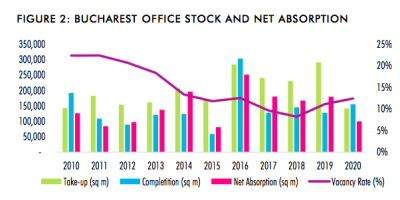 Romanian investors accounted for almost a quarter of the total investment volume, followed by Hungarian and Chinese investors.

Despite the pandemic, new projects continued to come onto the market in 2020. 10 major office buildings were delivered to the market with a total gross leasable area of 155,200 sq m, above the 10-year new supply average of 141,000 sq m. The biggest projects whose construction was completed in 2020 were Ana Tower, Globalworth Campus – Building C, One Tower, The Bridge – Building C and Campus 6.3.

254,000 sq m is due to be added to the modern stock this year; construction works have already started and half of the area is pre-leased, said the report. A further 17 office premises with a total area of 422,000 sq m are under construction or at the planning stage and expected to come onto the market in 2022-2023.

After office space, industrial properties were most in demand among investors. While they only accounted for 12% of transactions, this was attributed to the limited supply of product, despite strong demand.

Czech logistics developer CTP was the most active investor in this sector, accounting for 96% of the industrial investments by value as it bought up Equest Logistic Park, A1 Business Park and Mobexpert Logistic Park during the year, to consolidate its position as the largest player on the Romanian logistics market.

Modern industrial stock is steadily growing in Romania, to reach around 5.1mn sq m at the end of 2020 after 574,000 sq m was delivered during the year. This was as high as the previous peak in supply in 2018. 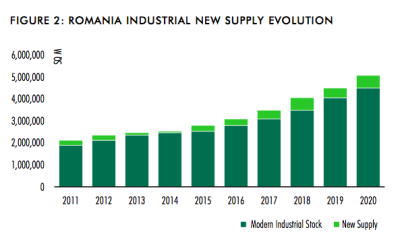 65% of the new industrial stock was in Bucharest, which now has modern stock of 2.30mn sq m. “Bucharest remains the go-to place for developers in a year with a lot of pressure for the industrial market where adaptation was the everyday principle to follow,” said the report.

Demand was driven up in 2020 by the changing needs of retailers and in particular the demands of e-commerce.

“Undoubtedly, with 50% of the total leased area, retailers were the engine that brought industrial demand to new heights in a challenging year filled with restrictions that contributed to industrial stock speedy evolution. Spaces for storage were the most sought after, representing 42% of the TLA, while companies in need for logistics and distribution premises jointly leased 50% of the total analysed area,” said the report.

As of the end of December, 398,000 sq m were under construction and expected to be added to the modern industrial stock by the end of the year.

There are also changes in geography, as 64% of the future new supply is in regional cities, wth the West/North-Western region  accounting for 52% of the total.

“The large share claimed by regional cities indicates both developers and tenants’ wish to be closer to their final consumers as well as the fact that they can no longer afford disruptions on the supply chain,” says the report.