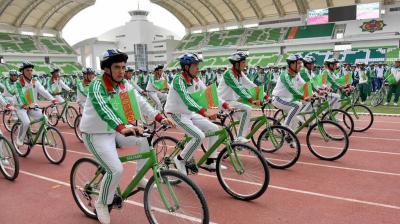 Inflation at 357%... but all we wanna do is bicycle! Somehow it doesn't ring true, but amid Turkmenistan's economic misery the government often uses 'mega' events, such as this Guinness Book of World Records challenge, to distract from grim reality.
By bne IntelliNews June 18, 2018

In Turkmenistan’s provinces people hoping to buy bread must now be ready to present their passport. Stores selling flour, meanwhile, require customers to sign up for a purchase one month ahead, Radio Azatlyk reported on June 15. These are just some of the worrying signs that the remote Central Asian nation, with inflation running towards 360%, has fallen into an economic crisis that is spiralling out of control.

Numerous reports of shortages of basic foodstuffs including sugar, butter and flour have emerged from Turkmenistan in the past few months, with one report in March describing how a frustrated mob broke into a store. The passport-based bread rationing and month-ahead scheduling for purchasing flour demonstrate a new low that does not bode well for social stability. Such measures have been introduced against a backdrop in which the unofficial rate to the dollar of the Turkmen manat (TMT) had dramatically weakened to TMT29 by June 4 from TMT10 at the beginning of the year. The worst rate experienced in 2017 was TMT5.8. Throughout the severe devaluations, and going back as far as 2015, the official rate has stood stubbornly at TMT3.51.

The manat is "sinking and extremely volatile," Steve Hanke, professor of applied economics at Johns Hopkins University in Baltimore and head of the Troubled Currencies Project at Washington's Cato Institute, said earlier this month, as he warned that Turkmenistan is now on “hyperinflation watch”.

According to Hanke, Turkmenistan experienced the world’s second highest annual inflation rate of 294% at the beginning of June, with only Venezuela faring worse. But some statisticians have suggested that the inflation figure was as high as 357%.

Earlier in June, a board member of Cakiroglu Group, a Turkish metals and construction company, revealed that Turkmenistan’s budgetary crisis, commonly believed to have originated from economic hazards caused by low world hydrocarbon prices across 2015-2016 and the loss of Russia as a major gas customer—leaving China as the only substantial gas client and Iran receiving only intermittent shipments amid rows over historical debts—may have started as early as 2013. Contracted foreign companies have reported not receiving payments for four to five years. The country’s total export revenues are estimated to have halved in 2016-2017 to $8bn from the 2014-2015 levels.

Blatantly dubious
The government of the tightly controlled country of five million has long been known for having blatantly dubious and vainglorious spending habits, and it appears that, despite woes including unemployment at around 50%, much of Turkmenistan’s funds were last year thrown at hosting a $10bn Asian games, creating the first Turkmen golf course, constructing a $2.3bn airport and investing in the $8bn-$10bn Turkmenistan-Afghanistan-Pakistan-India (TAPI) pipeline. Much of this money may have corruptly gone in the form of largesse bestowed upon loyal elements of the elite to buttress the regime. It’s not like there is anything like an opposition in the country to raise an effective protest against such graft.

The airport, which can handle 1.5mn passengers a year in a country that enjoys almost no tourism, is a particularly cruel irony to those Turkmen citizens who have attempted to leave the impoverished country to find work abroad, only to be turned back by the authorities. Hundreds of ticketed passengers have reportedly been blocked from boarding flights in recent months.

Even now, Turkmen President Gurbanguly Berdimuhamedov—known by the honorific Arkadag (Protector)—appears unfazed by the economic chaos and social disenchantment that surround him. Either attempting to desperately maintain a facade or completely oblivious to reality, Berdimuhamedov, who took power 11 years ago, earlier this month led 3,246 bicyclists as they pedalled to beat a Guinness world record several days ahead of World Bicycle Day, RFE/RL’s Turkmen Service reported. At the end of the feat, the president ordered the erection of a memorial to the “historic event [that] testifies to the growing international authority of our state”.

“Things are not going so smoothly at the moment because of the financial problems on the Turkmen side,” another company operating in Turkmenistan told bne IntelliNews. “They had a lot of problems during these past two years because of the falling oil prices [that dragged down gas prices] and shrinking financial revenues.”

Multiple desperate measures
The government has adopted multiple desperate measures to rescue the country’s budget including completely suspending Visa cards; ending the era of discounted gas, water and electricity prices for citizens; making contributions to Turkmenistan’s Pension Fund by business owners mandatory from 1 January; and even imposing more fines on car owners and Turkmen fortune tellers, whose occult services are popular in the country.

How long Turkmenistan can resist an official devaluation of the manat and meaningful economic reforms became a pressing question a long time ago. The World Bank and International Monetary Fund (IMF) continue to press for such measures but Ashgabat—which has been denied IMF help because of its failure to make serious changes—is not buying in.
In what might be taken as a rather diplomatic report, an IMF team that recently visited Turkmenistan concluded that its economy is “continuing to adjust” to “a challenging—although improving—external environment”. Rising hydrocarbon prices might help the country get out of a fix but for now many Turkmen looking for bread, sugar, cooking oil and other essentials see only lengthier and lengthier queues.