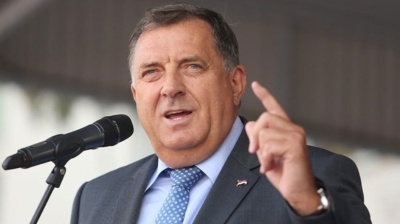 “Goodbye BiH, welcome RSexit!” These were the opening words from Milorad Dodik, the Serb member of Bosnia & Herzegovina’s tripartite presidency, to an extraordinary session of the Republika Srpska (RS) parliament at which lawmakers confirmed instruction to its politicians to block the work of state-level institutions.

Dodik has renewed his calls for a secession referendum for Republika Srpska, which is populated mainly by Bosnian Serbs. Should the referendum go ahead, and end in a vote for secession, it could lead to the breakup of Bosnia and the destabilisation of the wider region.

Dodik’s secessionist aspirations are not new and the latest threats come after his ruling Alliance of Independent Social Democrats (SNSD) announced that they would halt their work in the decision-making process in the state-level institutions.

Republika Srpska’s ruling politicians have many times claimed that the state-level constitutional court is working against the entity’s interests and have declined to obey its rulings.

Analysts believe that Dodik’s latest calls for a referendum are related to the forthcoming local election this autumn and, once again, aimed at diverting attention from the lack of tough reforms.

However, they have drawn the attention of international authorities involved in Bosnia. Valentin Inzko, Bosnia’s high representative, a position created after the Bosnian war to ensure the civilian implementation of the Dayton Agreement, said that secession would mean that a “red line is crossed”.

According to Inzko, however, Republika Srpska will not go further with secession ideas.

“We'll insist on respect for the Dayton Peace Agreement. The Dayton guarantees Bosnia's sovereignty and integrity, it contains the country' Constitution and according to the Dayton Agreement, the entities don't have the right to secede,” Inzko told N1.

Meanwhile, the European Union Force in Bosnia & Herzegovina (EUFOR) is watching the situation, but its assessment was that the current situation is not a threat, N1 reported.

Republika Srpska’s parliament adopted a resolution late on February 17, instructing its politicians to halt any decision making processes in state bodies until a law ending the mandate of foreign judges and replacing them with domestic ones in the constitutional court is adopted and the ruling on Repulika Srpska’s land is cancelled.

Three of the nine judges in the state-level constitutional court are foreigners – a decision that was part of the Dayton Peace Accord that ended the bloody 1992-1995 Bosnian war. The Dayton agreement was backed by both Republika Srpska and the Federation at the time.

The resolution also says that the constitutional court and the high representative are breaching Bosnia’s constitution by changing the political system.

“The National Assembly of Republika Srpska obliges all institutions of Republika Srpska to reject and not to implement any future anti-Dayton agreement and undemocratic decisions of the High Representative and the Constitutional Court of Bosnia and Herzegovina,” the resolution reads.

The entity’s lawmakers also instructed its politicians to “continue previously initiated negotiations with the government of [the Bosnian Federation] on defining the border between the two entities”. It did not elaborate on what border agreement the entity is seeking.

Dramatic fall in pollution in European coronavirus hotspots but business as usual in the Balkans
Coronavirus crisis to widen rich/poor gap within Central and Eastern Europe
wiiw slashes 2020 growth forecast for CESEE to just 1.1%