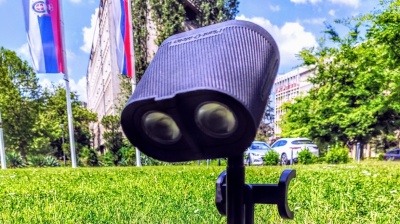 The Plant-O-Meter device developed by BioSense spots whether plants are under stress and how healthy they are. / BioSense Institute
By Clare Nuttall in Belgrade May 16, 2022

The world’s growing population will require farmers to increase their production in the coming decades, a task made more difficult by climate change. Digitisation of agriculture is already helping farmers to respond to changing conditions and raise production, according to the BioSense Institute in Serbia’s Novi Sad that works on projects that span bio systems and IT.

After greater agricultural production helped the world’s population to grow from 1bn at the start of the 20th century to close to 8bn now, director of the BioSense Institute Vladimir Crnojević warns in an interview with bne IntelliNews that the forecast further growth in the population to 10bn by 2050 “puts a huge demand onto agriculture, not only to provide more food than we have today but also to tackle other challenges”.

Crnojević lists pollution, climate change (which has direct consequences for agriculture), depletion of the ozone layer and other issues like resistance to chemicals. “We really have to come up with something smart, something environmentally friendly and with enough value to feed this population,” he argues.

Serbia is already feeling the impact of climate change. There have been some positives; warmer climates combined with the use of smart technology allow farmers to produce three harvests per year compared to two previously. But Crnojević also lists the downsides: “Of course it brings increased risk. For example, climate change brings variation in weather events so we have more extreme situations like storms and hail and drought.”

The answer to the growing demand for food combined with supply issues linked to climate change is the digitisation of agriculture, including the introduction of robotics and other hardware, in what Crnojević calls the third agricultural revolution.

“We advertised that 15 years ago. Now it’s obvious that is the way to go. We believe that soon agriculture will be fully automated and people will really be just consumers and manages. The sensors, robots, satellites, drones and other technologies we are using today will be predominant in agriculture.”

From science fiction to fact

The institute, now an important research centre with hundreds of international partners, started out as a small group of people who believed in the idea that IT and bio systems would meet in the future, Crnojević tells bne IntelliNews. That was back in 2005-06, years before the launch of the first iPhone in 2008 and drones as we currently know them in 2012. “At that time it was science fiction,” he says. However, he adds, focusing on that area “was a really good bet, because now it’s completely melting. The borders between bio systems and IT are getting lost”.

The focus on agriculture was also prompted by Serbia’s situation at the time. When the concepts were first discussed in Novi Sad, it was just a few years after a decade of war in the 1990s and the Nato bombings of 1999 had left Serbian industry devastated. At that time, says Crnojević, when looking at how emerging technologies could be applied in Serbia, “it was quite obvious that agriculture was the only thing that survived the 90s”.

Seven years ago, BioSense was set up as an independent institution with 10 people. Now it has almost 150 employees, and is co-operating with a network of hundreds of partners across Europe and further afield. Nonetheless, says Crnojević, BioSense is still “pursuing what we established as a vision 15 years ago which still holds strong”.

A critical milestone for BioSense was when it took part in an open call from the European Commission for centres of excellence. BioSense’s Antares project was ranked first among almost 200 projects from across Europe. The Antares project runs from 2017 to 2024, with funding from a Horizon 2020 grant from the EU and the Serbian government. Its aim is to develop the BioSense institute into the European centre of excellence for advanced technologies in the field of sustainable agriculture and food safety.

Today, the institute is organised in three research centres: the centre for bio systems, the centre for sensing technology and the centre for information technology. The new earthquake-proof building to house the institute on the bank of the Danube will soon be completed. It will include a nanotech laboratory to develop sensors of the future. “This is where we see the future of agriculture is going. We want to develop a facility that can produce sensors which will be needed for the future to generate the data from the soil, from plants, from animals,” says Crnojević.

New technologies are increasingly being used in Serbia’s agriculture sector. Compared to the region, Serbia is ahead in the digitalisation of agriculture, though it still lags behind European frontrunners like France or the Netherlands.

The BioSense Institute supports this through its AgroSens platform, which gives away free state-of-the-art technology to farmers in Serbia. Thanks to the programme, 20,000 people across Serbia are now in a position to use digital technology, including many in less developed regions.

“So far [farmers] are really accepting this well … and there are some more advanced users that already use drones and advanced sensors in their everyday use and they are asking for more,” Crnojević says. Smartphones are a critical part of this. He tells bne IntelliNews: “Digital infrastructure in the county and the right use of smartphones can bring digital agriculture to the areas that were not so advanced in agricultural efficiency, and this is what we are promoting.”

Crnojević notes that due to the seasonal nature of agriculture, the results from new technologies aren’t immediately visible. However, he says, “I think people who have already used the technologies have seen [results]. For example with arable crops they can use less fertiliser and get equal or better yields, they can optimise their irrigation and have better optimisation of human resources in the field.”

Demand for meat is also growing and the pressure this puts on the world’s resources has promoted research into alternatives, either plant-based or lab cultivated. “The model we have now where everywhere around the globe you want to have dry, aged beef – it’s not going to work,” says Crnojević. The methane released by cows is not only a powerful greenhouse gas (GHG); it is also damaging to the ozone layer.

BioSense is working on two projects with Columbia University in this area. The institute’s new building will have an incubator for lab-cultivated meat and there are hopes it will become one of the European leaders in this field. At present, lab-grown meat from cultivated cells is “extremely expensive but like every tech, we hope in five to 10 years it will become available for common people,” says Crnojević.

After developing Serbia’s first digital farm, BioSens has now been working on a much broader digital village project in the village of Mokrin in Vojvodina. Explaining the concept, Crnojević says that a digital farm – simply a farm that relies heavily on data – uses innovations such as machines with fully automated navigation, that enable the automated spreading of fertiliser and planting seeds that adapts from metre to metre according to data on the soil. Satellites and drones are incorporated into the management of the field, as are a number of different sensors that are either on machines or planted in the soil. This is all combined into a single system on one screen where the farmer can control the sensors.

“This is something we working on for several years. We have upgraded it with a new concept which is called digital village, where we are digitalising the whole village of Mokrin,” explains Crnojević, referring to a village of around 5,000 people in northern Serbia. BioSense is working with Delta, the biggest agricultural company in Serbia, and Mokrin House, a co-working and co-living space in the village, as well as other external partners.

All citizens of Mokrin will be invited to enter the digital system, which will give them benefits including managing their own production and interacting with others such as the government and other producers. They will be able to access joint insurance, banking, loan approval and other benefits through a single digital system. The project started in January, and its formal launch will be later in May.