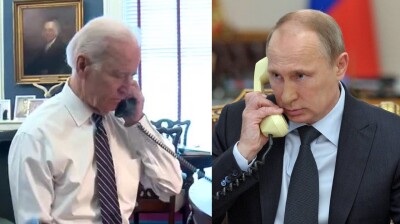 US President Joe Biden called Russian President Vladimir Putin and told him to withdraw troops on the Ukrainian border.
By Ben Aris in Berlin April 14, 2021

US President Joe Biden and Russian President Vladimir Putin talked by phone for the first time in a tense conversation on April 13. The US president warned Russia that it would be “held accountable” for the SolarWinds hacking and election interference and called on Putin to withdraw his troops from the Ukrainian border, but also offered to meet in a summit between the two leaders.

Markets reacted very positively to the news of proposed talks that came as an American initiative, taking it as a sign that the new Biden administration wants to normalise relations with Russia.

Tensions have skyrocketed in recent weeks as Russia moved significant numbers of troops up to the Ukrainian border and reinforced its military presence at bases in the Crimea peninsula that it annexed in 2014.

Biden told Putin that the United States would defend Ukraine's sovereignty and territorial integrity, and expressed concern about the concentration of Russian troops on its borders. The Kremlin's read-out of the call says that "during an exchange of views on the internal Ukrainian crisis, Vladimir Putin outlined approaches to a political settlement based on the Minsk Package of Measures."

Biden proposed the two leaders meet in a “third country” to thrash out their differences “in the coming months.” The White House read-out of the call did not indicate whether Putin had agreed to the meeting.

No venue for the mooted meeting has yet been determined, but two traditional options have already appeared: Vienna (the Austrian Foreign Ministry has already announced that it is ready to provide a platform) and Helsinki (immediately after his conversation with Biden, Putin called Finnish President Sauli Niinistö).

Putin's conversation with Biden was preceded by another exchange of unfriendly statements between the defence departments of potential adversaries. US Secretary of State Antony Blinken and NATO Secretary General Jens Stoltenberg today held a joint press conference in Brussels with Ukrainian Foreign Minister Dmitry Kuleba, declaring support for Ukraine and demanding that Moscow stop deploying troops on the border.

After that, Russian Defence Minister Sergei Shoigu spoke for the first time about the scale of this deployment near Ukraine. According to him, two armies and three airborne units are concentrated on the western borders. Deputy Russian Foreign Minister Sergei Ryabkov warned that if American warships enter the Black Sea, "the risks of certain incidents are very high."

Ukrainian President Volodymyr Zelenskiy has called on the West to accelerate Ukraine’s membership of NATO, but no such promise of membership has ever been made. Western leaders have called on Russia to remove its troop and have criticised Russia’s aggressiveness.

The statement makes it clear some sort of sanctions are on the way in response to Russia’s perceived cyberattacks and election interference; however, the mild tone of the statement suggests they will be targeted and specific, rather than “nuclear.”

“President Biden also made clear that the United States will act firmly in defence of its national interests in response to Russia’s actions, such as cyber intrusions and election interference,” the White House press service said in a statement.

Biden also signalled that he wants to keep a door open to working with Russia on a number of his key goals, including negotiating arms control deals and tackling the climate crisis.

“They discussed a number of regional and global issues, including the intent of the United States and Russia to pursue a strategic stability dialogue on a range of arms control and emerging security issues, building on the extension of the New START III  [missile] Treaty,” the White House said.

There is no mention in the White House readout of any discussion of jailed Kremlin critic Alexei Navalny. Navalny’s representatives have said that his health is failing and he was recently moved to the hospital wing of the prison where he is serving a 2.8-year sentence for breaking his parole conditions.

The statement sheds a little more light on Biden’s intentions towards Russia, as despite a lot of rhetoric the White House has given few details on its intended policy towards the Kremlin.

Since taking office Biden has talked tough on Russia, saying it will have to “pay a price”; however, the only two concrete actions the Biden administration has taken so far is to mirror the EU sanctions imposed as a result of the poisoning and imprisonment of Navalny by sanctioning nine Russian officials directly connected to the Russian investigation into Navalny’s case, as well as rapidly signing off on the new START III treaty.

Likewise, US Secretary of State Antony Blinken warned Russia last week there would be “consequences” for Russian aggression against Ukraine, but he left his remarks at that, without giving any indication of what sort of consequences there could be.

The consensus amongst both Russian and Ukrainian analysts, as well as the Ukrainian foreign ministry in its recent comments, is that there is very little chance of an imminent military invasion of Ukraine, but a consensus that Moscow is making a very dramatic gesture in hope of setting the agenda with the new Biden administration at the start of his four-year term in office.

“The troops are not yet back at their bases, but the war alert along the Russo-Ukrainian border has passed. In fact, a war was never in the cards. Yet the alert, while it lasted, was profoundly disturbing,” Dmitri Trenin, the widely respected director of the Carnegie Moscow Center, said in a comment on April 13, before going on to lay out the goals the Kremlin was hoping to achieve.

In addition, others have suggested that Russia hopes to capture a little more territory and unblock water canals leading to the Crimea, which has insufficient water for its largely agricultural based local economy.

Putin is also facing parliamentary elections in September and the ruling United Russia party is deeply unpopular. A short sharp war would rekindle the sense of nationalism that sent Putin’s personal approval ratings to historic highs following the annexation of the Crimea in 2014.

And finally the Ukraine crisis is a useful distraction from the disapproval the Kremlin earned from jailing anti-corruption activist and opposition politician Alexei Navalny in January.

Trenin points out that while the fears of a hot war are fading rapidly, that does not mean the tensions are de-escalating and the possibility of miscalculations remain high.

The tensions won't be resolved until the details of the next round of US sanctions on Russia are announced, and many analysts believe that with Russia’s posturing on the Ukrainian border tough sanctions are inevitable.

“Guess both sides will want to go into talks from a position of strength – hence the need for Biden to roll out sanctions before the actual meeting. Otherwise Biden just looks like a soft touch – Putin drives his tanks up to the border with Ukraine and Biden rolls over, pulling sanctions and gifting Putin a summit,” says Ash.

Whatever the political pundits think, the market reaction was immediate and positive. After the ruble tanked in recent weeks as military tensions rose, as soon as the Russo-US summit was announced the ruble rallied hard, rising by 2% to RUB76.1, its strongest level since November and the beginning of the end of the coronacrisis as the vaccines’ approvals were announced.

Trenin believes the political theatre of such overt sabre rattling was a calculated gambit by the Kremlin to shock the West and head off more serious consequences further down the road.

“Perhaps the most important thing for the Russian leadership in this episode was to prevent the need to actually go to war against Ukraine in the future. Going [into] overkill in terms of military manoeuvres on the Ukrainian border now may avoid the need to do terrible things at a later point,” said Trenin in his comment.

Russians Services PMI remains a strong 55.2 in April but slowed a little from March, optimism for the rest of the year high