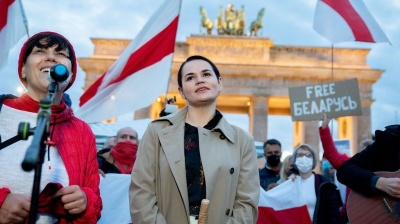 The pair discussed the plight of the Belarusian people following August's disputed election that left Lukashenko clinging on to power by the use of brute force. Tikhanovskaya also visited the Berlin Wall, calling it a "symbol of freedom” and sang songs with Belarusian supporters in front of the Brandenburg Gate.

"I am very grateful to Germany and all the German parties who are so supportive of the Belarusian people in their fight for freedom, in their fight for new honest and transparent elections," Tikhanovskaya said after the meeting, which lasted 45 minutes. 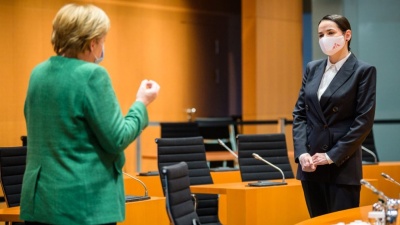 The nominal winner of the disputed presidential August 9 election told the German chancellor that peaceful rallies in Belarus will continue, and the number of political prisoners is increasing.

“Svetlana stressed that the protests in Belarus are not a struggle against Russia or in favour of Europe: they are a consequence of the internal Belarusian crisis. And a primary goal of the people is new elections. It is important that they be held in the near future, since the people have lived under pressure for 26 years and they do not intend to endure it any longer,” Merkel said according to reports.

She has also called on Berlin to lead the mediation efforts between the protesters and Lukashenko. Merkel has led EU efforts to engage in Eastern Europe and especially deal with Russia, which is now backing Lukashenko’s regime.

"We want Germany, as one of the most powerful countries in the world, to help in negotiations," said Tikhanovskaya in Berlin. "Anyone willing to act as a mediator can help us."

Germany has already done a lot, the opposition leader said, adding that she is grateful that the EU has imposed sanctions on people close to the ruler Lukashenko. "This is a victory, but it is a small victory. The list needs to be extended," Tikhanovskaya said.

French President Emmanuel Macron would have been another candidate, but he has been extremely outspoken in his criticism of Lukashenko and probably made himself unacceptable to Minsk.

While Merkel has said the elections in August were not legitimate, she has been more restrained in her comments and once again stressed that Western powers should not interfere in the domestic affairs of Belarus, something that both the Kremlin and the opposition have repeatedly called for.

Tikhanovskaya visited the Berlin Wall and went to one piece in particular, at Potsdamer Platz, which activists had painted in Belarus' national colours of red and white in support of the anti-government movement. "I was shown a picture of people from the eastern side standing on the wall," she said, referring to the scenes following the collapse of the East German regime in 1989. "It's the same in Belarus: we are on this wall and we are going to tear it down."

Later in the evening on Tuesday, representatives from Merkel's conservative bloc presented the opposition leader with an original piece of the Berlin Wall, which described as a "symbol of freedom."

She is in Berlin for two days and is also due to meet with the leaders of Germany’s political parties while there, as well as German Foreign Minister Heiko Maas on Wednesday.