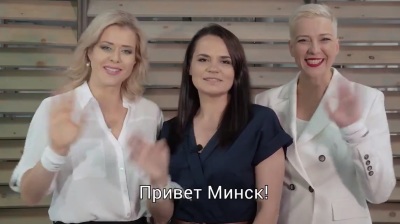 The Minsk city government booked out all the public venues with concerts to prevent any more opposition rallies, so the opposition went to the concert and hi-jacked the event
By Linas Jegelevicius in Vilnius August 6, 2020

The authorities in Minsk blocked former housewife and now leading opposition candidate Svetlana Tikhanovskaya and her team from holding their final rally on August 6, just before the country votes for a new president this weekend. The Minsk city government organised a concert on the square, which Tikhanovskaya filled with an estimated 63,000 on July 29, the biggest political rally since the country’s independence. So she hijacked the event.

“Tsikhanouskaya and her trio joined their supporters! Thousands are greeting them as real heroes. It supposed to be the government rally but the opposition seized control over it. Unbelievable,” tweeted Franak Viacorka, a journalist based in Minsk. 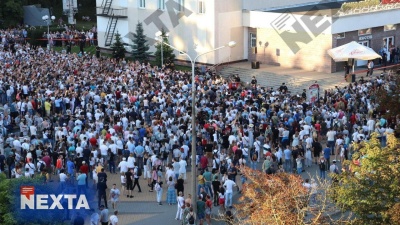 Belarus president Alexander Lukashenko was clearly unsettled by the size of the crowd at Tikhanovskaya rally in Minsk. And not only. Tikhanovskaya and her team have been touring the country holding rallies in towns big and small, attracting large crowds at every stop.

Tikhanovskaya has joined forces with Veronika Tsepkalo, the wife of Valery Tsepkalo who was barred from the race and fled the country with their children, and Maria Kolesnikova, who ran the campaign of ex-banker Viktor Babariko, who was jailed on money-laundering charges.

Her simple call for a free and fair election and her promise to immediate call new free and open elections if she wins has struck a chord and radicalised the whole population.

Unable to counter her growing momentum, Lukashenko has been reaching for ever more repressive means to try and derail Tikhanovskaya’s campaign. With only a few days to go he effectively banned any more rallies.

But the plan went badly wrong.

A few hours before the concert was due to begin, the three women took to social media and invited their supporters to attend the concert. Large crowds began to gather, clapping, calling Tikhanovskaya’s name and shouting for Lukashenko to “Go away!”

When Tikhanovskaya and Kolesnikova appeared they were greeted with thunderous applause and the DJs played “Change” by Soviet legendary singer Viktor Troi, Tikhanovskaya’s unofficial campaign anthem as well as throwing up the clenched fist and V for victory signs that are used by the three women.

By the end of the day US rapper Tyga annoucned that he would cancel an appearance at a concert on August 8 in Minsk on the eve of the voting. "My performance was not politcally motivated adn to avoid any conflict with the Belarus elections, I will not be performing on August 8th in Minsk. I hope to be back to play for my fans there at a future date," the musician tweeted.

Unconfirmed reports say that foreign artists are massively refusing bookings by the Belarusian authorities for events scheduled over the next few days in solidarity with the opposition, which are being blocked from holding more public events before polling starts. 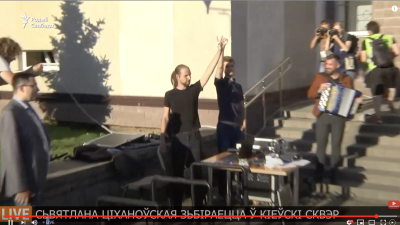 If the authorities were hoping to silence the three women then their plans backfired badly as the event turned into yet another huge PR coup for Tikhanovskaya.

Tikhanovskaya’s people had filed an application for staging a rally in the Peoples’ Friendship Park in Minsk as far back as mid-July, but on August 3, the authorities of Savetski district of Minsk announced they were organizing an alternative celebration of Railway Troops’ Day at the same venue and time.

“We are not allowed to hold rallies at any venue in Minsk, as well as in Slutsk and Salihorsk. The authorities’ actions are absolutely illegal; we have appealed against this decision to the Prosecutor General’s Office, the Central Election Commission and Minsk City Executive Committee, but we are not going to get people into trouble,” her team was quoted as saying.

In late afternoon of August 6, plainclothes policemen detained Tikhanovskaya’s election agent Maryia Maroz and warned her that if she tried to hold a rally in the Peoples’ Friendship Park that day, the organisers might be jailed. She was then released later.

“Between May 6 and August 5, at least 1,362 people were arbitrarily detained, @viasna96  reports. There are 25 political prisoners. Independent observers are prevented from doing their job and detained at polling stations. Dozens of foreign journalists are waiting for accredit,” Hanna Liubakova tweeted.

As early voting got under way an election-monitoring campaign called Honest People said that their observers had registered 2,056 violations of the election law in Minsk and other cities on August 4 -- the first day of early voting.

With only a few days left before the vote, a new poll conducted by Russian newspaper Kommersant found that former housewife will narrowly beat Lukashenko in the presidential election on Sunday.

The poll was conducted by phone and has 8131 respondents. The Belarusian authorities have effectively made independent polling illegal and one of the problems with this election is there are no independent or trust worth indicators of the various candidates’ support.

These results are very different from the poll commissioned by the Belarusian state-owned broadcaster ONT that found Lukashenko enjoys 72% support and Tikhanovskaya only 7.5%.

Another poll from the local tyt.by news outlet found that Tikhanovskaya enjoys support of 61% against 3% for Lukashenko. None of the polls in this race are thought to be particularly accurate.

I won’t start the shooting

It is widely expected that Lukashenko will simply fix the results to give him a landslide victory. It is also widely expected that there will be mass protests starting on August 10 after the results are released. And it is widely feared that Lukashenko will then unleash the riot police to disburse the demonstrators and the situation could quickly deteriorate into violence.

“I’ll never be the one who shoots first,” Lukashenko said during an interview with tut.by on August 6, once again raising the spectra of violence. “The state will not allow the destabilization of the situation in the country during the presidential election,” Lukashenko added later at a government meeting to discuss ways to maintain security during the presidential election, BelTA, Belarus’s state news agency reported.

Lukashenko urged the police to closely communicate with the public in order to prevent the destabilization of the situation and to identify suspicious persons. The president noted that many provocateurs were detained due to the vigilance of the public and claimed several were US passport holders or agents of NATO.

“To be honest, we do not know what they are capable of. We do not even know who they are: Americans with the NATO, or someone from Ukraine or our eastern brothers show ‘their affection' towards us this way. A hybrid war is going on against Belarus and we should expect dirty tricks from any side, which we actually do,” Aleksandr Lukashenko emphasised.

According to the president, quite a number of people detained in Belarus sought to destabilize the situation in the country, there is evidence of that. These are not only members of the private military company. “We know addresses, houses, names. Certain things are just beyond belief. Mass media are keeping us on our toes speculating that Americans, the NATO want to invade us. Some people with American passports were detained; they were married to American women working in the Department of State. However, Russian top officials are going to extraordinary lengths to defend them,” Lukashenko said.

The Deputy head of Russia’s Security Council and former president and prime minister Dmitry Medvedev regretted that the Belarusian leadership has turned bilateral ties into “small change in the election campaign” and described the arrested contractors as part of a “simple political technology — to create an enemy image and to achieve a political result using that enemy image”, he said a day earlier.

Medvedev warned that it would have “grave consequences” for ties between the two neighbours and allies.

Tikhanovskaya in Brussels to ask for help, but Cyprus vetoes EU proposed sanctions on Lukashenko

MITTELEUROPEAN INSIGHTS: Better $1.5bn from Russia or €1bn from the EU in the hand than $15-20bn in the bush?
Belarus' IT workers exit the country
Tikhanovskaya in Brussels to ask for help, but Cyprus vetoes EU proposed sanctions on Lukashenko