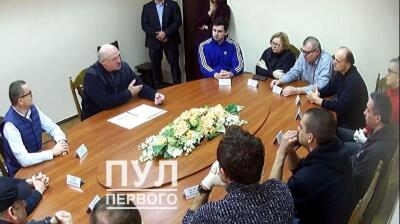 Belarus' self-appointed President Alexander Lukashenko met with the jailed opposition leader Viktor Babariko on October 10 in a KGB pre-trial detention centre for 4.5 hours of talks. (Babariko is in the blue shirt at the head of the table)
By Ben Aris in Berlin October 11, 2020

The details of their conversation were not released, but the presidential press office said that Lukashenko had called for the meeting as he wanted to discuss the details of a constitutional reform he has proposed to break deadlock with the protesting population.

The ex-banker Babariko was arrested shortly before the presidential elections were held on August 9, where the incumbent won by a "landslide" in what is widely seen as a massively falsified result.

Going into the vote Babariko was favourite to win, after he gathered over 400,000 signatures as part of his application to stand as a candidate, a new record that was far in excess of the necessary 100,000 and equivalent to about 5% of the population.

However, mystery surrounds the real reason for the meeting and social media was set alight with speculation over the weekend. This is the second time Babariko’s name has come up, as it was reported that Lukashenko and Russian President Vladimir Putin talked about Babariko during their meeting in Sochi on September 14.

Lukashenko has managed to alienate almost the entire population with his heavy-handed fix of the election results and subsequent brutal police crackdown. He is widely seen as damaged goods and as bne IntelliNews has speculated, while the Kremlin needs him for the meantime it is thought that it is prepared to withdraw its support if a suitable replacement can be found.

The Kremlin is thought to be focused on closing a Union State deal that would create the equivalent of the Eurozone between Russia and Belarus – a “Rublezone.” The Kremlin is also keen to avoid a messy collapse of the Lukashenko regime that it would not be able to control or shape. The chaos that is emerging in the popular revolution of last weekend in Kyrgyzstan following yet another falsified vote there last weekend is a graphic illustration of what could happen in Belarus.

Notably the two other leading jailed opposition leaders – Maria Kolesnikova, one of the three women that campaign against Lukashenko, and Sergey Tikhanovsky, who was another leading presidential candidate arrested in July – were not invited to the meeting.

There was some confusion over Tikhanovsky, as some social media users identified one of the participants at the meeting as Tikhanovsky, while others said the person in question at the table was an intelligence officer. The footage released by state TV made it difficult to be sure of the man's identity.

One possibility floated in the social media chatter over the weekend is Lukashenko is attempting to split the opposition. Tikhanovskaya's international prestigue is growing as she travels Europe to meet EU leaders like German chancellor Angela Merkel. By introducing Babariko back into the dialogue Lukashenko may be trying to undermine her position or at least set up a rival source of power in the oppsition.

An alternative is that some sort of Kremlin-backed deal has also been floated.

Babariko ran Belgazprombank for 20 years, the local branch of the Russian state-owned banking arm of national gas monopolist Gazprom. He is well known in Moscow and has espoused largely pro-Russian policies that are also popular with the majority of the population.

As the leading candidate in the presidential elections, he would be largely acceptable to the Belarusian population and if he took a position of power then that would very likely bring the protests to an end.

Just how this could be done remains a matter of speculation. Lukashenko has suggested a long-winded reform of the constitution, but has specifically said that this might include giving up some political power to political parties, which are currently largely non-existent in Belarus.

That suggests that parties could be created on the basis of the opposition fractions, which would then have to compete against each other, and the office of Prime Minister beefed up, but leaving Lukashenko in place in the diminished office of President in a face-saving compromise.

Babariko and Kolesnikova have already founded a new political party called “Together” to fight in new elections the opposition hope to bring about. The party was planned since before the elections and a video announcing its creation was shot before Babariko was jailed, but released on September 1 after his arrest.

In the message Babariko says that the time has come to announce the continuation of the struggle despite Lukashenko's falsification of the elections, and to this end the “Together” party has been set up, the goals of which will be to carry out constitutional reform, work to improve the economy, and the opportunity for people to show civic initiative.

“Hundreds and thousands of Belarusians, talented professionals, are ready to take responsibility and build a new Belarus together,” Kolesnikova said in the joint message. “Registration documents will be submitted in the near future. We will unite and be even stronger. Together we will win!”

Lukashenko has said that amendments to the constitution will be presented to the people in a referendum, after which new presidential and parliamentary elections can be held during the next two years.

The other opposition leaders, represented by the newly established Coordinating Council, have rejected this option out of hand as taking too long. The Coordinating Council position is simple: Lukashenko must leave office now; the political prisoners must be immediately released; and fresh elections held straight away. Former English teacher and nominal victor in Belarus’ presidential election Svetlana Tikhanovskaya has also suggested that before the new elections are held she would organise a referendum to return the country to the 1994 constitution that contains term limits for the president.

In another sign that something is afoot, Tikhanovskaya was allowed to talk to her husband by phone for the first time in four months in a 12-minute call. Tikhanovskaya fled the country shortly after the elections and has been touring Europe since, drumming up support for the popular revolution still underway in Belarus.