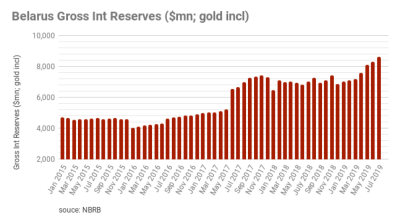 The foreign exchange reserves of Belarus increased by $337mn, or 4.1% month-on-month, to $8.63bn in July following a 2.5% m/m growth in June, the National Bank of Belarus (NBB) said in a statement on August 7,

At the same time, Minsk fulfilled external and internal foreign exchange obligations worth about $500mn in July.

According to Monetary Policy Guidelines for 2019, the volume of international reserve assets as of January 1, 2020 should be at least 7.1 billion.

According to the nation's monetary policy guidelines for 2019, the volume of international reserve assets as of January 1, 2020, should be at least $7.1bn.

Earlier this year, Russian President Vladimir Putin has greenlighted the allocation of a new $600mn government loan to Belarus. Minsk was going to use the money to repay previous Russian loans. The two governments are discussing procedures needed for signing the loan agreement, Siluanov added.

The Russia-led Eurasian Fund for Stabilisation and Development (EFSD) is also considering the allocation of the seventh $200mn tranche to Minsk. In October 2018, the EFSD allocated the sixth $200mn support tranche to cash-strapped Belarus from the lender's $2bn loan agreed with Minsk in 2016.

The allocation of the tranche followed reports that Moscow intends to suspend the allocation of new tranches from $2bn support package agreed between Minsk and the EFSD, as well as suspend negotiations on a new $1bn intergovernmental loan, which could be a painful blow for the reserves.

On December 8, a spokesperson with Belarusian President Alexander Lukashenko said in a televised interview that Minsk has already lost $3.6bn due to Russia's cut of energy subsidies to Belarus. Due to Moscow's tax manoeuvre Belarus will lose an additional $11bn within the next four years, the spokesperson added.