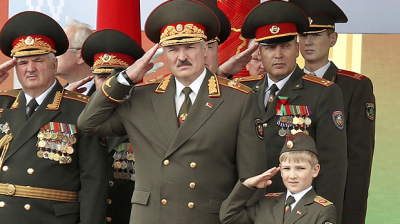 President Alexander Lukashenko of Belarus
By bne IntelliNews May 7, 2020

The Belarusian authorities have revoked the media accreditation of a news crew of the Russian Kremlin-controlled television Channel One and deported its correspondent from the country after his report about the snowballing coronavirus (COVID-19) crisis in the post-Soviet republic, which refuses to implement the recommendations of the World Health Organisation (WHO).

The accreditations of the channel's correspondent Oleksei Kruchinin and his cameraman were revoked one day after Channel One aired on May 6 his report alleging that April's Orthodox Christian Easter services and a state-organised nationwide subbotnik had led to a surge in new coronavirus cases in the country.

The Belarusian Foreign Minisirty did not name the reason for which it had revoked the accreditations for the Russian journalists.

Channel One said it sees the Belarusian government's decision to revoke the accreditations of the TV channel's film crew as unwarranted. "We can confirm the expulsion of our correspondent and the revocation of accreditations from the entire film crew. We view these steps by the Belarusian authorities as absolutely groundless," the channel's press service told news agency Interfax the same day.

Lukashenko hints at the Kremlin

In April, authoritarian President Alexander Lukashenko, Central and Eastern Europe's longest-ruling head of state, slammed Russia's media for their coverage of the coronavirus epidemic in Belarus.

"They provide disgusting information, saying that the Belarusian president wants people to treat with a tractor, vodka, sauna [...] You know, it was a joke. But there is part of a joke in every joke," state news agency BELTA quoted Lukashenko as saying on April 13. "I would like to tell those Russians who are spreading this crap: don't touch us. We are not asking anything from them. We are doing our best to protect and save ourselves."

"Come to Belarus and see it with your own eyes. But why are you making fools of us in Russia? Why do they make Russians think that Belarusians are some crazy people," Lukashenko, who has earlier advised to the nation to threat the coronavirus epidemic by strong spirits and saunas, added.

The president added that "we cannot say" that Russian television channels and some social media "are uncontrollable channels", hinting that the Kremlin has been behind their coverage of Belarus.

Over the past weeks, the nation's health authorities have reported 800-900 new coronavirus cases on a daily basis. The total number of coronavirus cases in Belarus has grown to 20,168, while 116 people have died as of May 7.

For comparision, neighbouring Latvia recorded another nine COVID-19 infections on May 7, increasing the total number of cases to 909. In Ukraine, 10,955 cases of COVID-19 were confirmed as of May 7, while 261 people have died.

Shrugging off WHO advice

The WHO has urged Belarus to increase "physical distancing" as the coronavirus (COVID-19) outbreak enters "the community transmission phase" in the country.

The statement has appeared against a background of growing criticism of the Belarusian authorities, which have refused to impose a quarantine on the country. Earlier in March, Lukashenko told citizens to take to the fields and drive tractors to fend off the virus, and has told his government the pandemic is nothing more than a "psychosis".

According to the recommendations of a team of WHO experts at the end of its assessment of the country’s response to the pandemic, the WHO said in a statement on April 21: "The government has already implemented containment measures – testing suspect cases, tracing their contacts and isolating the sick. It has also placed emphasis on increasing capacity to manage the surge in COVID-19 patients, while continuing with essential health services for chronic diseases, maternal health and mental health. With community transmission established, it is important to complement these interventions with physical distancing measures."

According to the WHO, physical distancing measures list: postponing large gatherings, including sports, religious and cultural events; placing in quarantine contacts of confirmed patients and people potentially exposed to the virus; introducing options for teleworking, and distance learning for schools, universities and other educational institutions, and suspending nonessential business; reducing nonessential movements, especially for high-risk groups.

On April 22, Lukashenko said that Belarus will not disregard the recommendations of the WHO but will act accordingly to the developments.

The blogger, who has been touring Belarus in a camper van for more than a month and making videos about local problems amid the coronavirus outbreak, was pulled over by traffic police. He livestreamed police’s attempt to get him out of the vehicle, including the country's special-task police unit officer’s threat to smash its side window, according to Minsk-based news agency BelaPAN.

Belarus, headed by Lukashenko, remains among top-10 global most censored countries in the world, New York-headquartered Committee to Protect Journalists (CPJ) said in a special report published in September 2019.

'Almost absolute control over the media'