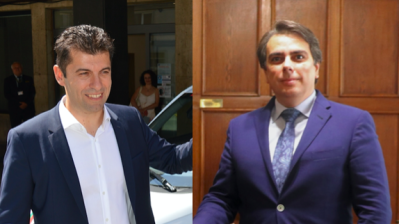 Kiril Petkov and Assen Vassilev, two members of the caretaker government that was running the country until September 15, have formally announced they are entering politics and will run in the next general election on November 14.

Since two general elections, first in April and later in July, failed to produce a government, Bulgaria has been governed by a caretaker cabinet headed by Prime Minister Stefan Yanev for several months. His ministers have been working to root out corrupt schemes from under the previous administration, which ironically has turned the temporary government into the most popular to rule Bulgaria for decades. It had an unusually high rating of above 50% due to its decisive steps towards revealing high-level cases of corruption, abuse of office and misuse of funds by the latest cabinet of Boyko Borissov.

Petkov and Vassilev were among the most popular ministers in the former caretaker government and are widely expected to become a significant factor in Bulgaria’s political life. Some suggest they might be the new faces seen by Bulgarians as saviours of the country — voters previously pinned hopes on leaders like Borissov and Radev — which could result in them garnering widespread support ahead of the November vote.

The announcement was made on September 16, when President Rumen Radev introduced the new caretaker government. As expected, Yanev is keeping his post along with all but three members of the former interim government.

They include Petkov and Vassilev, as well as former transport minister Georgi Todorov, who was involved in approving a controversial deal on the extension of a channel at the port of Varna. A third minister who was widely expected to join Petkov and Vassilev – Professor Nikolai Nankov – has decided to continue heading the education ministry for the next two months in order to continue the work he has started.

“Today I say clearly that we are entering politics and we shall be part of the political life and we shall participate in the next election,” Petkov said while transferring the economy ministry to his successor, Daniela Vezieva.

Petkov said the two will look for a party to be a mandate holder for the election as they would not have time to register a new formation before the vote.

There were rumours in local media that Petkov and Vassilev could become the leaders of a new political party, which would be connected to Radev, but Petkov has denied that. “We support very much President Rumen Radev – based on principles, his views, our work in the caretaker government, but this in no way will be his party,” Petkov said.

He added that talks with several small political formations are being held but that he and Vassilev would insist on having freedom to make decisions.

According to unofficial information from Mediapool, Petkov and Vassilev are talking to former defence minister Nikolai Tsonev’s New Alternative, former Bulgarian Socialist Party (BSP) member Simeon Slavchev’s MIR and the Volt party launched by Nastimir Ananiev, a former MP from the right-wing Movement Bulgaria of Citizens (DBG) party. Talks were also held with the Ekoglasnost party but Petkov said they ended as this formation wants to dictate the politics.

Prior to becoming caretaker economy minister, Petkov was among the co-founders of Yes Bulgaria, one of the parties in the Democratic Bulgaria coalition. He is also founder and CEO of the ProViotic company that produces probiotics. The company is among the successful ones in Bulgaria. Petkov was also active in environmentalist and anti-corruption protests.

His friend and colleague Vassilev is co-founder of the Centre for Economic Strategies and Competitiveness. He has worked as consultant for Monitor Group in the US, Canada, Europe and South Africa.

If the two enter the parliament, they are expected to work with reformist Democratic Bulgaria and with Stand up.BG! We Are Coming (ISBG), though it is not clear whether the groupings would manage to put together stable majority.

Sceptics expect the next parliament to produce more of the same and yet another snap vote to follow.

Meanwhile, at the official ceremony to appoint the new caretaker government, Radev said its objectives remain unchanged: to continue strengthening the rule of law, a process that started in mid-May when Radev appointed the previous government, to prepare for the next snap vote and to take reasonable steps to overcome the coronacrisis and improve people’s lives.

Vezieva, who is replacing Petkov at the economy ministry, was a member of his team and is expected to continue implementing the same policies.

The finance ministry will be headed by yet another Harvard graduate, Valeri Belchev, who said when taking the post that his ministry will work towards the adoption of the euro, and to promote transparency among the institutions controlled by the ministry.

Hristo Aleksiev, who was heading the state railway infrastructure company until he was appointed as the new transport minister, said the ministry will work on improving rail transport.