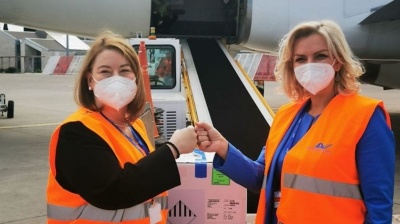 After low vaccination rates across most of Southeast Europe enabled the spread of a new wave of the coronavirus (COVID-18) pandemic, governments have introduced new rules barring entry to shopping malls, night clubs and other venues to people without a coronavirus certificate.

In several countries in the region, people now have to have proof of vaccination or recent recovery from the virus, or a recent negative test for certain activities. Similar rules now apply to those crossing borders in the region, and discussions have started on compulsory vaccination for sectors such as healthcare.

There are hopes this will overcome the apathy towards vaccination among large segments of the population, but with many people vehemently opposed to receiving the vaccine, this has also sparked unrest. 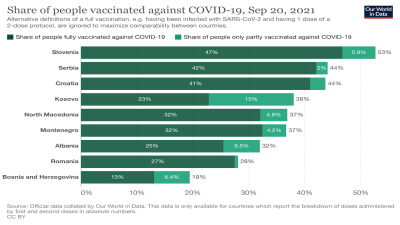 Vaccination rates in Southeast Europe. Source: Our World in Data.

On September 15, the day new rules saying employees and users of services in nearly all sectors have to be vaccinated or show a negative test to enter indoor spaces came into effect, an estimated 8,000 people gathered on Trg Republike in Ljubljana to protest.

What started as a peaceful demonstration erupted into violence when some of the protesters lit torches and began throwing them at the parliament building. The police responded with tear gas and water cannon, which forced the protesters to disperse,  N1 Slovenia reported. The news channel also reported that fans of the two largest football clubs in the country were present at the rally.

Parliament speaker Igor Zorcic wrote on Twitter that a dozen windows in the parliament building were broken by protesters. “I strongly condemn today's vandalism at the protest, with the attack on the National Assembly building,” Zorcic said urging protesters to protest peacefully and not to use violence in future.

Meanwhile, the epidemiological situation in the country continues to deteriorate.

A violent incident was reported in Bulgaria on September 20, when people attacked a mobile vaccination centre in the Black Sea city of Varna. caretaker Health Minister Stoicho Katsarov condemned the attack, also stressing that vaccination is the most effective way of avoiding COVID-19.

Bulgarian officials had previously mooted the idea of a vaccine certificate, but met a strong negative reaction. The caretaker government’s tighter new restrictions, including early closure for restaurants and bars, have already sparked protests. On September 8 several thousand people protested against the latest restrictions and threatened to shut down the whole country by the end of the month if their demands are not respected. The protest was organised by the associations of cafes, restaurants, tour operators, bus transportation, taxi drivers, driver instructors, fitness clubs and party centres.

Also mid-September, dozens of Albanians protested at the border with Montenegro, when they faced new restrictions on entering the neighbouring country. At the Hani i Hotel border crossing, Albanians who usually cross the border daily to work in Montenegro said they were being asked to pay €23 for tests at the border as officials refused to recognise their vaccination certificates or proof they had recovered from the virus, as reported by Albanian Daily News.

Within Albania, the government has introduced compulsory vaccination for doctors and teachers, as well as students aged over 18. They have until September 30 to get vaccinated. Tirana said the same requirement will be extended for people working in the public administration, police force, pharmacists and laboratory technicians, but a deadline has not been set for these groups. There is now discussion of extending compulsory vaccination to employees in other areas.

Vaccination up in North Macedonia

North Macedonia’s government adopted new anti-coronavirus (COVID-19) measures back on August 17. A certificate for at least one dose of vaccines, negative PCR test or a recovery test will be needed for people over 18 years of age who want to go to cafe bars, restaurants, malls, casinos, sport events or other facilities regardless of their capacity and number of attendees. Additionally, all catering facilities with the capacity of more than 30 visitors have to provide security guards to implement the measure.

As reported by bne IntelliNews, citizens' interest in getting a jab increased after the announcement of the measures. However, some citizens’ associations held protests in Skopje after the government imposed the measure in August. "The government discriminates against people by allowing the vaccinated to access public and private facilities, while the unvaccinated will be deprived of some of their basic human rights," the citizens’ associations said.

The Independent Catering Chamber was among those against the new measures. The main reason is that the number of vaccinated citizens is much lower than those who are not vaccinated, which means the number of their guests will drop significantly. Head of the Chamber Zdravko Josifovski said that caterers do not plan to go out to protest, but will express their dissatisfaction in the upcoming local elections. According to him, over 6,500 catering facilities are affected with over 35,000 employees.

In Kosovo, customers visiting shopping malls will need a similar certificate. The overnight curfew continues remains in place from 10pm to 5am. A debate is currently underway on whether to allow the autumn local elections to go ahead.

There is strong resistance to any similar scheme in Bosnia, despite the country having one of the highest coronavirus death rates in the world. At the beginning of September, measures were announced by Edin Forto, Prime Minister of Sarajevo Canton, and Haris Vranic, Minister of Health of Sarajevo Canton, but this sparked a backlash and one lawyer immediately filed criminal charges on the grounds the Bosnian constitution guarantees freedom of movement and work to all.

Contributions from Valentina Dimitrievska in Skopje, Eldar Dizdarevic in Sarajevo, Denitsa Koseva in Sofia and Clare Nuttall in Glasgow.